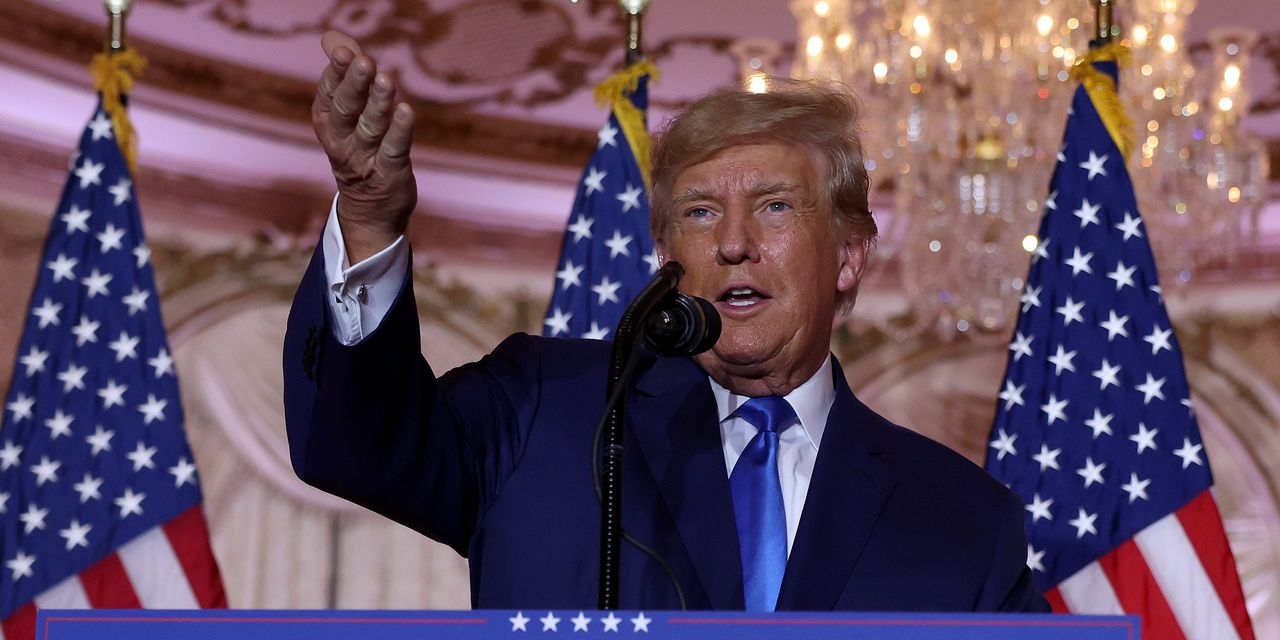 “America’s comeback starts right now,” said Trump, who officially entered the 2024 race with a primetime campaign announcement from Mar-a-Lago on Tuesday night. “In order to make America great and glorious again, I am tonight announcing my candidacy for President of the United States.”

While Trump remains banned from Twitter after the social networking site permanently suspended his account last year “due to the risk of further incitement of violence” following the Jan. 6, 2021 attack on the Capitol, his campaign announcement had the 45th president trending on Twitter and topping real-time Google search trends on Tuesday night.

Opinions were divided over his third consecutive presidential bid, which was to be expected — but the cheers and jeers did not necessarily fall along party lines.

Sure, Democrats including President Joe Biden countered that Trump “failed America” during his single term.

DNC Chair Jaime Harrison also called the announcement “low energy,” and noted that even Fox News eventually cut away as the speech ran beyond 40 minutes.

Sarah Matthews, a onetime deputy press secretary in the Trump administration, also tweeted that it was “one of the most low-energy, uninspiring speeches I’ve ever heard from Trump.”

There are a number of Republicans and conservatives who share reservations about Trump returning to the Oval Office. (He did make history for being the first U.S. president impeached twice while in office.) And some prominent Republicans, such as Rep. Kevin McCarthy, Senate Minority Leader Mitch McConnell and GOP chairwoman Ronna McDaniel, were quiet on Twitter during and immediately after Trump’s announcements. In fact, his daughter Ivanka Trump, who served as a special adviser to the former president while he was in office, didn’t attend the big announcement. She released a statement saying that while she loves her father, she has decided “I do not plan to be involved in politics” this time around.

The Lincoln Project, a group of current and former Republicans that have been vocally anti-Trump, released a statement that read, “Donald Trump wasn’t only the worst President in American history; he’s the most destructive toward the American Republic and its ideals of free and fair democratic elections.”

The Republican Accountability Project tweeted out the hashtag #NeverTrump. And the conservative magazine National Review tweeted “a firm, unmistakable, No.”

And some prominent GOP members were already speaking out against Trump being on the 2024 Republican ticket in the run-up to Tuesday night’s announcement.

Rep. Liz Cheney, the Republican from Wyoming and a member of the Jan. 6 panel investigating Trump’s involvement in the attack on the Capitol, told the Washington Post’s Global Women’s summit: “There’s no question that he’s unfit for office, and I feel confident that he will never be president again.”

Indeed, exit polls showed that strong anti-Trump sentiment, as well as anger over the Supreme Court’s decision to overturn Roe v. Wade and send the issue of abortion rights back to the states, energized support for Democratic candidates at the midterm elections — and stymied Republican hopes of riding a “red wave” to take back both houses of Congress.

Other Republicans suggested that Florida Gov. Ron DeSantis could be the surer bet over Trump to beat the Democrats in 2024. While DeSantis won re-election by a 19-point margin in last week’s midterm elections, a number of Trump-backed candidates lost their races, such as Pennsylvania Senate candidate Mehmet Oz.

The night before Trump’s big announcement, Sen. Mitt Romney, a Utah Republican, likened Trump to an “aging pitcher who keeps losing games” while speaking to MSNBC. “If we want to win, we need a different pitcher on the mound,” he added. “I know there’s some fans that love him, but it’s time to get off the mound, because we have a real strong bench.”

And that sentiment was shared by some fellow Republicans on Twitter.

Citadel’s billionaire founder Ken Griffin, a major Republican donor, said: “I really do hope that President Trump sees the writing on the wall … and I’d like to think that the Republican Party is ready to move on from somebody who’s been, for this party, a three-time loser.” (He was referring to Trump losing the presidential election in 2020, Republicans losing their Georgia Senate seats the same year, as well as Republicans failing to take control of the Senate in last week’s midterms.)

Conservative George Conway — husband of Trump supporter Kellyanne Conway — responded by tweeting out his latest Washington Post op-ed that said “Trump is out for vengeance,” but predicted, “Trump won’t succeed, as his successive losses of the House, Senate, presidency and last week’s midterm results show. Too many Americans would crawl on broken glass to vote against him, no matter who his general election opponent may be. They have seen enough.”

Even if his support seems to have slipped somewhat — another recent Morning Consult poll found Trump backed by 48% of potential Republican primary voters, which is down nine points from a 57% high in August — the GOP’s “Teflon Don” has bounced back before. And plenty of Trump’s fellow party members took to Twitter to celebrate his return to the campaign trail on Tuesday night. In fact, Rep. Elise Stefanik, a Republican from New York, had already endorsed him for president a week ago. “I am proud to endorse Donald Trump for president in 2024,” she said in a statement to the New York Times. “It is time for Republicans to unite around the most popular Republican in America who has a proven track record of conservative governance.”

Arizona Republican Kari Lake, who just lost to Katie Hobbs in the state governor’s race, tweeted that Trump “has my complete and total endorsement.” Republican state Sen. Wendy Rogers of Arizona responded, “Add me to the list.” And Republican Rep. Marjorie Taylor Greene, who won re-election in Georgia, tweeted “We will make America great again.”

And there were also calls to let Trump be allowed back on Twitter.