Home
Stocks
: Beyond Meat’s jerky collaboration with PepsiCo helped sales but hurt margins
Prev Article Next Article
This post was originally published on this site 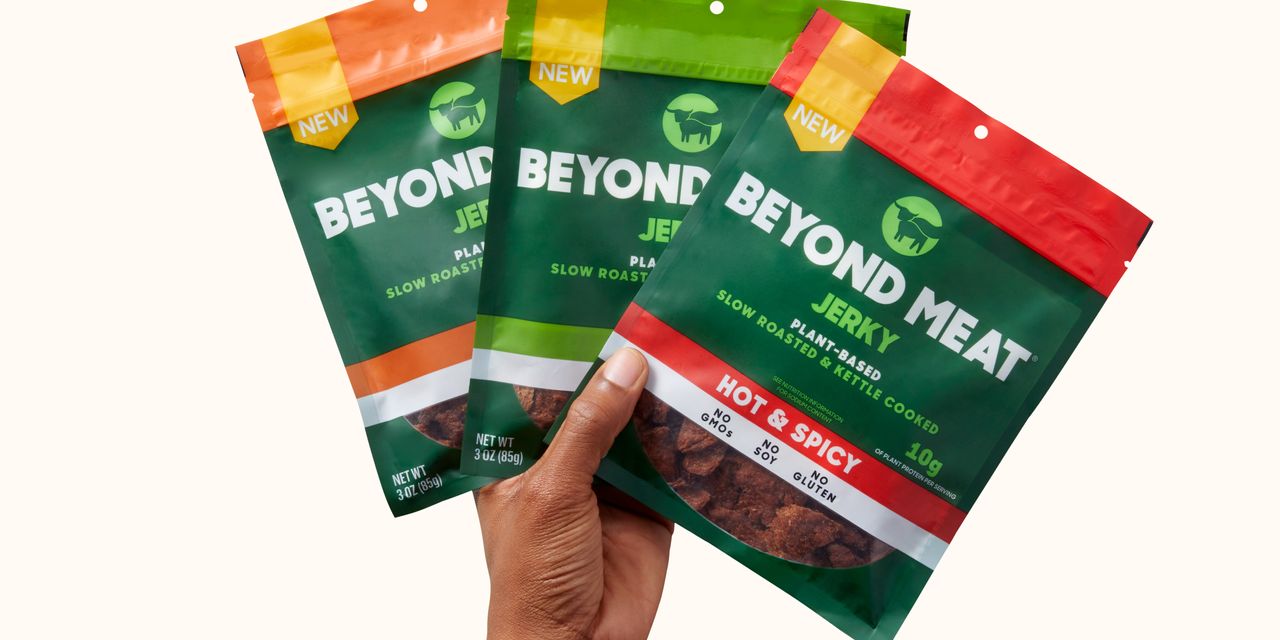 Beyond Meat Inc. said revenue got a boost from the launch of Beyond Meat Jerky through a collaboration with PepsiCo Inc., but making the product hurt margins for the quarter.

“The company’s first-quarter results included the launch of Beyond Meat Jerky, which it estimates reduced gross margin by approximately 940 basis points compared to the year-ago period,” the earnings release said.

The company said, however, that margins should improve going forward.

Jerky debuted in March, the first product from the Planet Partnership LLC with PepsiCo
PEP,
.
While Chief Executive Ethan Brown talked up the success of the product on the earnings call, including an appearance on Amazon.com Inc.’s
AMZN,

New Releases page, Mizuho analysts say “the early economics are weak,” and wonder whether the return on the product will justify the expense.

“We expect H2 economics will improve and distribution will ramp via Pepsi’s system, but we question whether the size of the opportunity necessitated a launch amid current economics and the penalty of another negative margin surprise,” the Mizuho note says.

Mizuho quotes Nielsen data showing that U.S. meat snacks are a $4.5 billion business, but says “it bears watching the extent to which plant-based can make sustainable inroads.”

Mizuho rates Beyond Meat stock neutral with a $21 price target.

Also: McDonald’s has made the McPlant available across the U.K. and Ireland but no word yet on the U.S.

Beyond jerky, there were also troubles in the foodservice category. Beyond Meat said revenue was hurt by the loss of a customer, though the company didn’t specify which customer. CEO Brown said that March was “among the largest revenue months in our company’s history,” but the beginning of the quarter wasn’t as robust.

“We believe that the slow start to the quarter was likely related to omicron, labor shortages and a late return to school, among other factors,” he said on the earnings call according to FactSet.

BMO Capital Markets maintained its market perform stock rating for Beyond Meat, noting all of the headwinds that the company faces, including pricing, a “profit-dilutive growth strategy” and a challenging retail environment. But analysts were more positive about the company’s restaurant partnerships.

“We would not be surprised if Beyond Meat generated at least $100 million annually from its five main foodservice launches (e.g., McDonald’s US, McDonald’s
UK and Ireland, KFC, Panda Express, and Pizza Hut Canada) in 2022 with the ability to accelerate significantly if it can expand into more McDonald’s US locations before the end of the year,” BMO’s note said.

Beyond Meat also noted a change in placement of its products in grocery stores that may have had an impact.

“[W]e saw a shift in consumer purchase from refrigerated to frozen,” Brown said on the call.

Mizuho says it might be time to rethink the growth possibilities in the plant-based meat category.

“We don’t want to get too caught up in short-term weakness, but also believe it is far too early in the life cycle to lean on easy comps for growth. COVID’s 2020 retail sales spike pulled forward demand and with early adopters likely satiated, new consumers are proving lighter,” Mizuho’s John Baumgartner wrote.

And while CEO Brown says Beyond Meat is making good progress toward its “goal of building tomorrow’s global protein company,” BTIG analysts say investors are concerned about how much the company is spending to get there.

“We believe the level of cash burn for the past several quarters is making investors
increasingly nervous that a capital raise is on the horizon,” analysts led by Peter Saleh wrote.

“The company’s cash balance declined $185 million this quarter, leaving them with about half of the $1.15 billion in capital raised just a year ago. Our conversations suggest that many investors believe Beyond Meat will need to raise additional capital later in 2022 to sustain operations, unless there is a meaningful inflection in sales and gross margins.”

And: White House criticizes meat giants for jacking up prices after Tyson’s earnings

Beyond Meat reported a wider-than-expected first-quarter loss and revenue that missed FactSet expectations. Shares rose 8.1% in Thursday trading and are down 56.6% for the year to date.