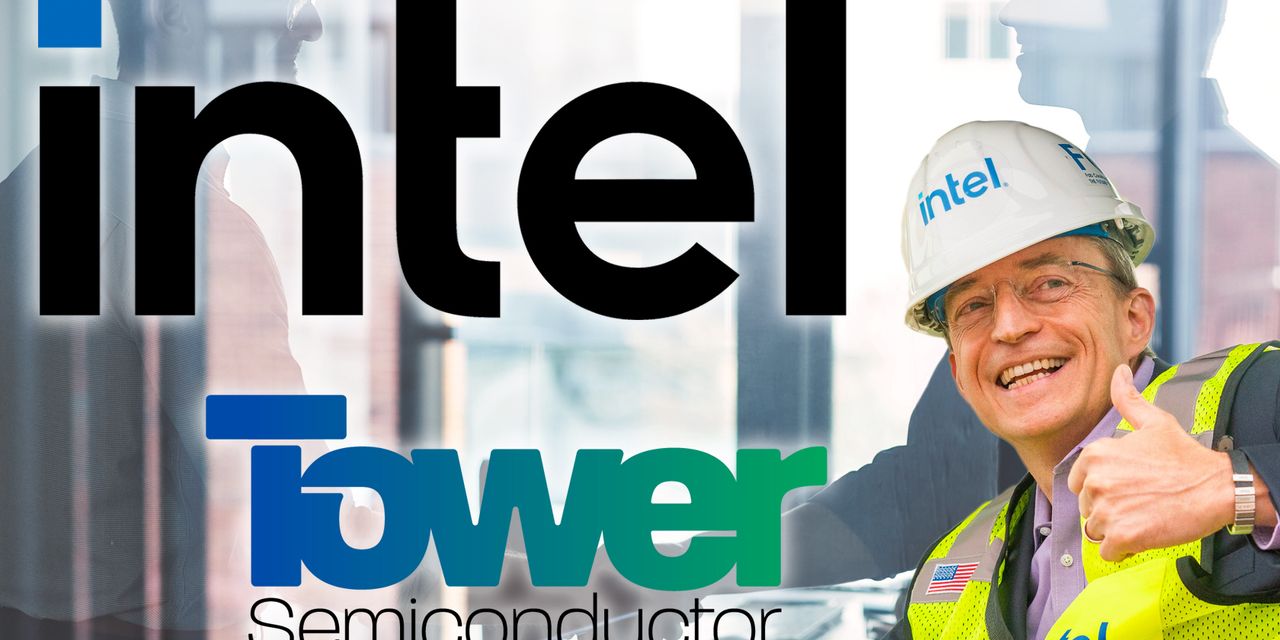 Wall Street analysts have been unhappy with Intel’s declining gross margins of late, as Chief Executive Pat Gelsinger cuts into profit to build out manufacturing capacity. The deal for Tower will add several foundries, or “fabs” in industry parlance, but brings with it more low margins, and one analyst said Tuesday the fabs Intel are acquiring “in no way helps Intel become a foundry at the leading edge.”

traded as much as 1.5% higher Tuesday, while U.S. traded shares of Tower
TSEM,

surged as much as 42% from their Monday close to an intraday high of $47.47, or about 10% below Intel’s $53-a-share offer for Tower. Tower shares rallied as much as 50% after The Wall Street Journal reported Monday afternoon on the deal, based on inside sources, and Intel confirmed the deal Tuesday morning.

Tower makes a variety of chips ranging from those catering to the consumer, industrial, automotive and mobile markets. Evercore ISI analyst C.J. Muse, who has an in-line rating and a $55 target on Intel, brought up the gross margin pressure question, which has dogged Intel for more than a half a year now.

Meanwhile, Muse said he sees “talent acquisition as a key positive as it relates to operating a foundry model for a newcomer like Intel,” as the deal gives it

Tower brings to the table fabs in Migdal Haemek, Israel; Agrate, Italy; Newport Beach, Calif.; and San Antonio, according to Tower’s website. Also, Tower also owns a 51% stake in TPSCo. with Nuvoton Technology Corp.
4919,
.
That partnership runs three fabs in Japan that specialize in integrated circuits, more than 750 million of which have gone to the auto industry, according to Tower.

Intel has pledged to build out its manufacturing capacity, earmarking up to $28 billion for 2022 back in October, and recently said it would spend more than $20 billion to build a “mega-site” fab in Ohio, as well as $20 billion for sites in Arizona.

Muse is concerned that the foundries Tower owns are not cutting-edge, and that “this acquisition in no way helps Intel become a foundry at the leading edge while the lagging edge world is highly competitive.”

While Intel said the acquisition will immediately lift adjusted earnings per share, Wall Street is a little skeptical. Mizuho analyst Vijay Rakesh, who has a neutral rating on Intel and a $53 target, said he sees the deal as “modestly” diluting gross margins even more.

Rakesh said he sees investors are concerned that estimated 2022 gross margins for Tower are around 25%, while Intel before the deal forecast no lower than 52%.

Bernstein analyst Stacy Rasgon, who has an underperform rating and a $40 target on Intel, said the deal raises several questions for the chip maker to answer on an important investor meeting scheduled for Thursday.

Read: Semiconductor sales top half a trillion dollars for the first time, and are expected to keep growing

So far, Intel has only given investors a “flavor” of how much it’s turnaround will cost, “though even that flavor has been sour with margins compressing, near-term capex exploding, and FCF vanishing,” Rasgon said.

“We still do not know when the trough is, how deep it goes, and what the company really will look like on the other side of the chasm (assuming they get there),” he said.

In addition to exactly how Tower is going to fit into Intel’s fledgling foundry business, Rasgon said he has nine other questions for Intel ahead of Thursday.

Rasgon said he wants to hear about what the full-year guidance looks like; what long-term growth/operations looks like; when the trough of the transition will be; how important the PC market will be; what government subsidies it expects; thoughts on the competition, which would be Advanced Micro Devices Inc.
AMD,

as it enters the datacenter CPU business; what are plans for the discrete graphics business are, which Nvidia dominates; updates on AI/Machine Learning; and more details about cash return as capital investments gobble up free-cash flow.

Of the four analysts who cover Tower’s U.S. traded shares, three have ratings on the stock, according to FactSet data. Two, Jefferies analyst Mark Lipacis and Craig Hallum’s Richard Shannon, both downgraded their ratings to hold from buy, but raised their target prices for the stock, resulting in a target price of $47.50, compared with a previous $46.25.

Lipacis, in his downgrade, said he expects “the deal to close post the normal regulatory approval processes around the world, including China,” and believes the possibility for a bidding war is low.

“We continue to view TSEM fundamentals as excellent, with high backlog and improving pricing, but given the rapid share price increase, we lower our TSEM rating to Hold,” Lipacis said.

In July, Intel was reportedly seeking to acquire a then-privately owned GlobalFoundries
GFS,

in a deal that was estimated to be around $30 billion, but that speculation was quashed in October when GlobalFoundries filed for an initial public offering and started traded publicly on the Nasdaq Oct. 28.