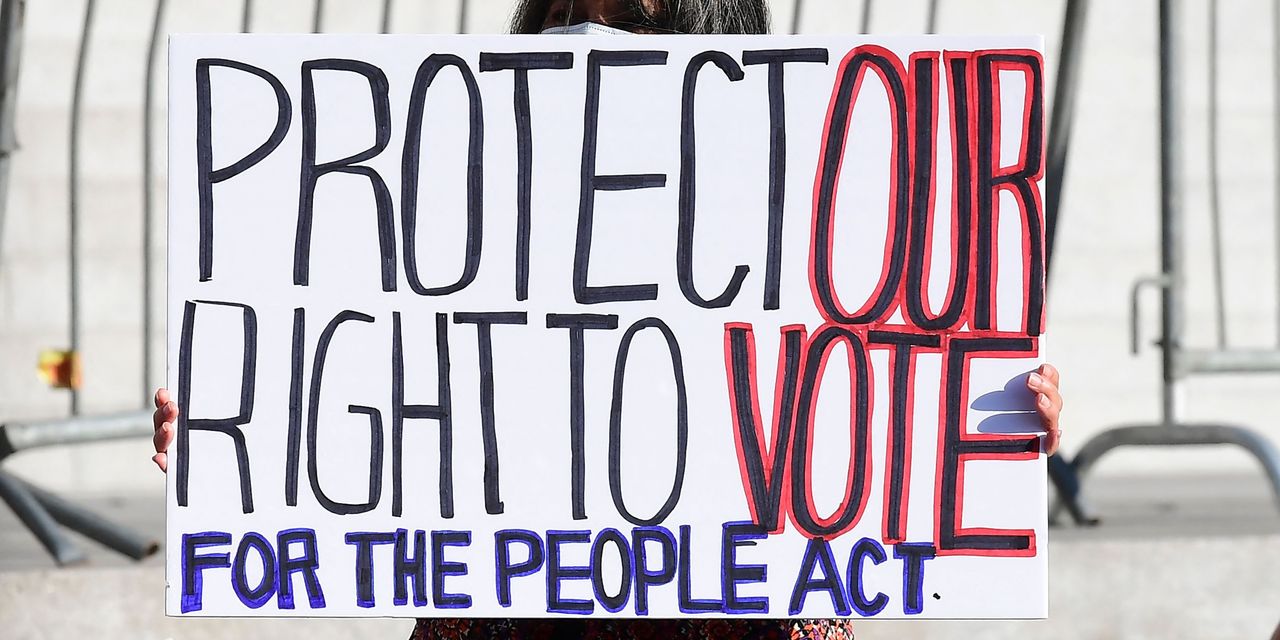 As states across the U.S. enact new laws relating to elections, there have been efforts to capture, in aggregate, the effects of those laws. Reports, found in both journalism and advocacy group statements, that new election laws will “restrict” voting or have an “anti-voter” effect misrepresent what many of the laws will do.

On July 14, a story in The Washington Post described what it called “voting restrictions,” citing figures from a website called the “Voting Rights Lab,” and noted that “17 states had enacted 32 laws with provisions that tighten rules for voting and election administration.” The Voting Rights Lab describes itself as working to “build winning state legislative campaigns that secure, protect, and defend the voting rights of all Americans.”

The Brennan Center for Justice, a nonprofit with a goal “to reform, revitalize, and when necessary, defend our country’s systems of democracy and justice,” offered a July “roundup” to assess “the full impact of efforts to suppress the vote in 2021.” The roundup concluded that “at least 18 states enacted 30 laws that restrict access to the vote,” a figure cited by Vice President Kamala Harris in comments on the anniversary of the Voting Rights Act.

Classifying a law as a voter suppression, as a voting restriction or as a tightening of a rule for voting involves judgment. It anticipates the future effect of a law, and it concludes that the law will have a negative effect.

As a scholar of election law who has examined the statutes that have been lumped together as “voting restrictions,” I have found that while some could fairly be given that label, many are ordinary rules of election administration that simply don’t merit those labels. Many bills will likely have no discernible effect, much less a negative effect, on the right to vote.

Utah’s House Bill 12, for instance, was enacted unanimously by both houses of the Utah Legislature.

Utah’s bill updates a law about how to remove dead people from the list of registered voters. It increases the communication surrounding death certificates to election officials, and it requires the state election administrator to submit Social Security Administration data about those who have died to county clerks so that clerks may remove them from the list of registered voters.

The Brennan Center lists this as a law that restricts the right to vote; the Voting Rights Lab describes its effect as “unclear.” But this is not a voter purge statute, which can remove living voters from the voter roster. It only removes dead people from the list. It is a routine update to election administration.

States also updated laws about the size of polling places. The trend toward increased absentee voting and early voting means fewer voters visit the polls on Election Day. Some states have moved toward “vote center” models, in which voters are no longer assigned to a single polling place and instead have more geographic flexibility in choosing where they vote. As these other forms of voting increase, the traditional precinct model no longer needs to be as small as it is. Slightly larger precincts allow states to shift money to these other forms of voting opportunities.

The Nevada Legislature unanimously agreed, after hearing only support from county election officials, to increase the potential maximum size of a precinct from 3,000 voters to 5,000. County officials can keep smaller precincts as appropriate. The bill closes no precincts. Counties in Nevada have moved toward vote centers, which allow voters to go to any polling place within the county. But this law, Senate Bill 84, was labeled “anti-voter” by the Voting Rights Lab and a “restriction” by the Brennan Center.

New York’s Assembly Bill 7478 is similar, increasing the potential maximum size of a precinct from 1,150 voters to 2,000. The old rule had been built around the physical limitations of lever-operated voting machines, as these voting machines could accommodate only 1,000 voters. The machines have been phased out in favor of optical scan ballots, and polling places can now accommodate more voters. The bill passed the Assembly by a vote of 148-0, and the Senate 55-8. The Voting Rights Lab called it “anti-voter.”

Other bills target how elections are funded. The coronavirus pandemic brought increased costs for mailing ballots and administering a safe election. Grants, including $300 million from Facebook founder Mark Zuckerberg and his wife, Priscilla Chan, were distributed to states and localities to help with the new administrative burdens.

But the decision of a private grantor to give money to some jurisdictions raised questions about whether such efforts were politically motivated and would affect voter behavior and election results. Before the election, reporter Ken Vogel at the New York Times wrote about concerns that private subsidizing of elections “raises new legal and political questions.”

These efforts to label a law as pro-voter or anti-voter, then to lump those votes into a round number of “voter suppression” efforts, miss important details and context.

Too often, the label is inaccurate. Certainly, with some laws, the effect on voters is going to be more significant. Litigation in Georgia over Senate Bill 202, for instance, reveals strong differences in opinion about the bill’s effects.

But it is important to detail what a new law does and not simply offer a conclusion that is really an allegation about it.

When they are examined closely, the effect of many of these new election laws is much less dramatic. A label like “restriction” or “anti-voter” should be used when it’s likely that a voter’s experience is materially altered to make voting more difficult. My examination of these bills suggests that none of them rise to that level.

Derek T. Muller is the Bouma Fellow in Law and a law professor at the University of Iowa in Iowa City. Follow him on Twitter @derektmuller. This was first published by The Conversation — “Claims of voter suppression in newly enacted state laws don’t all hold up under closer review.”