Home
Stocks
Coronavirus Update: Delta variant drove COVID-19 cases higher across the globe last week — including in the U.S.
Prev Article Next Article
This post was originally published on this site 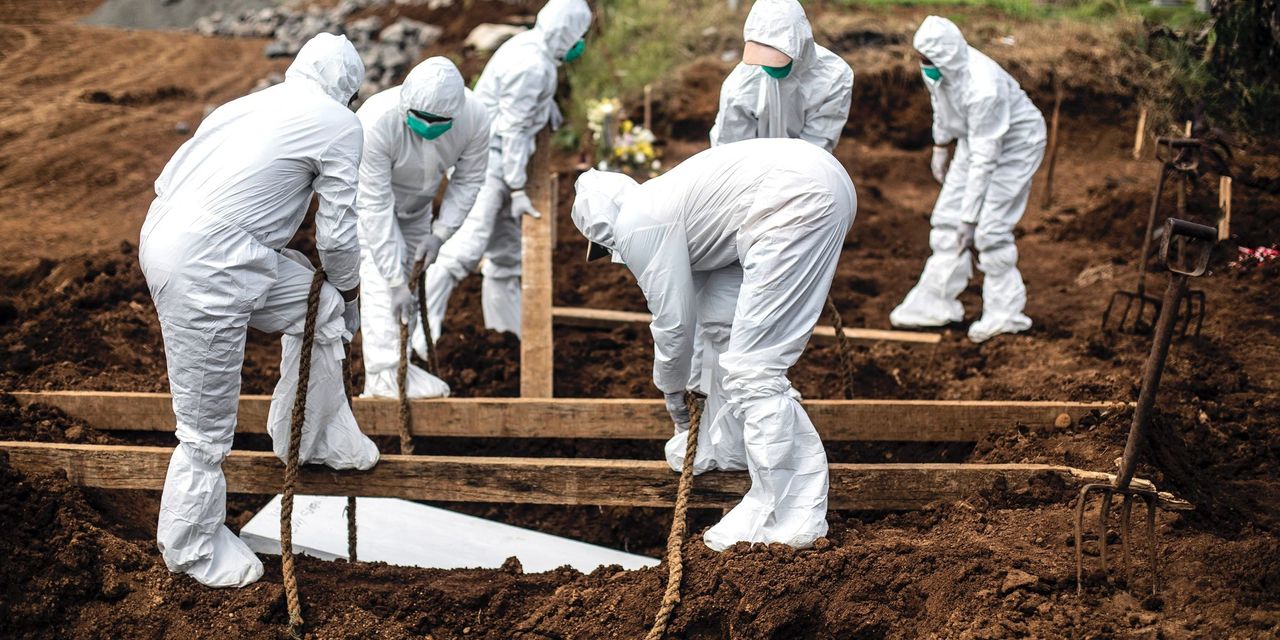 The highly transmissible delta variant of COVID-19, now present in 111 countries, drove cases higher across the globe in the past week, including in the U.S., where the curve is rising again after months of declines, especially in those states with low vaccination rates.

And while the rise is mostly due to outbreaks in states like Arkansas, Missouri, Texas and Nevada, where fewer people are vaccinated, cases are also climbing in New York, which averaged 655 cases on Tuesday, up 103% from two weeks ago.

New York has a high vaccination rate of abut 64% of adults now fully inoculated, meaning they have had two doses of the vaccines developed by Pfizer Inc.
PFE,

and Moderna Inc.
MRNA,
,
or one of Johnson & Johnson’s
JNJ,

vaccine has not been authorized for use in the U.S.

Health officials say most of the new cases in New York are in unvaccinated people, but in other places, even the vaccinated are succumbing to the delta variant. In Mississippi, for example, which has vaccinated less than 40% of its population, State Health Doctor Thomas Dobbs said vaccinated residents accounted for 12% of COVID hospitalizations in the latest week, up from just 5% two weeks ago.

Dr. Peter Hotez, vaccinologist and dean of the National School of Tropical Medicine at Baylor College of Medicine, told CNN that children will be most affected if adult Americans refuse to get vaccinated and they are at risk of long COVID, a version of the illness that causes debilitating symptoms that persist for months.

“Transmission will continue to accelerate … and the ones who will also pay the price, in addition to the unvaccinated adolescents, are the little kids who depend on the adults and adolescents to get vaccinated in order to slow or halt transmission,” said Hotez.

In Mississippi, there are currently seven children in intensive care with COVID-19, two of whom are on ventilators, according to Dr. Dobbs. Hotez cautioned that up to 30% of children who are infected will develop long-haul COVID, CNN reported.

In Europe, there are growing concerns about the rapid spread of delta, which has created a 500% surge in cases in the Netherlands since it reopened its economy on June 26, including nightclubs, bars and restaurants. The spike has sparked criticism of the U.K. plan to fully reopen its economy next Monday, even as delta cases are rising fast across its four member countries.

Don’t miss: Top U.K. scientists and health officials are worried about the delta variant. Here’s what they say countries need to do.

The U.K. features in the update as the country with the fourth highest number of new cases in the latest week, after Brazil, India and Indonesia.

And in South Africa, protests are disrupting healthcare efforts as the country struggles with a third wave of the virus.

See also: WHO head slams countries for ordering millions of COVID booster shots, when much of the world has not even vaccinated the most vulnerable

The global tally for the coronavirus-borne illness climbed above 187.8 million on Wednesday, while the death toll climbed further above 4.04 million, according to data aggregated by Johns Hopkins University.

Mexico has fourth-highest death toll at 235,277 but has recorded just 2.6 million cases, according to its official numbers.

In Europe, Russia leads in deaths with 142,877 fatalities, while the U.K. has 128,748, making Russia the country with the fifth-highest death toll in the world.

China, where the virus was first discovered late in 2019, has had 104,129 confirmed cases and 4,848 deaths, according to its official numbers, which are widely held to be massively underreported.

Read also: Should schools and employers mandate COVID vaccination? Americans come down on one side — by a whisker

Don’t miss: What are the symptoms of Guillain-Barré syndrome? Should I still get the J&J vaccine?