Home
Stocks
Coronavirus Update: COVID-19 cases top 120 million globally, and U.S. accounts for one-quarter of the total
Prev Article Next Article
This post was originally published on this site

The world reached another grim milestone of 120 million cases of the coronavirus-borne illness COVID-19 on Monday, and the U.S.’s chief medical adviser Dr. Anthony Fauci said he was “anxious” that optimism on progress on the pandemic in the U.S., which accounts for one-quarter of the global total, could be cut short as states lift restrictions.

Dr. Fauci warned that the recent surge in new cases overseas, particularly in Europe, could very easily spread to the U.S. He noted that Europe, which has been a few weeks ahead of the U.S. with new surges, started lifting restrictions as thought they were “home free,” but they weren’t. Read more in “Key Words” column.

— Dr. Anthony Fauci, on polls showing nearly half of Trump voters will choose not to be vaccinated.

He urged Americans not to get complacent, even as case numbers have fallen and people who have received vaccinations have topped 107 million. Although “we’re getting around the corner,” Fauci said on NBC’s “Meet the Press” on Sunday, that when you plateau at a level of round 60,000 new infections per day, as the U.S. has, there’s always a risk of another surge.

“That’s why I get so anxious to hear pulling back completely on public health measures, like saying no more masks. That is a risky business when you do that,” Fauci said.

The U.S. recorded at least 38,034 new cases in the U.S. on Sunday, and 572 new deaths, according to a New York Times tracker. There has been an average of about 54,832 cases per day over the past week, which is down 19% from the average two weeks earlier. Keep in mind that those numbers are likely underreported given reduced staffing at hospitals and healthcare centers at weekends.

“It makes absolutely no sense,” he said. “And I’ve been saying that for so long, we’ve gotta dissociate political persuasion from what’s common sense, no-brainer public health things.”

An NPR/PBS NewsHour/Marist poll, as displayed by “Meet the Press,” showed that 47% of people who voted for former President Donald Trump said that they would choose not to get vaccinated while 30% said they would, compared with 58% of President Joe Biden voters who said yes, they would choose to be vaccinated, and 10% who said no.

“What’s the problem here?” Fauci said. “I just can’t comprehend what the reason for that is. I just don’t get it.”

Don’t miss: Fauci said it could be a ‘game changer’ if Trump urged loyalists to get vaccinated. 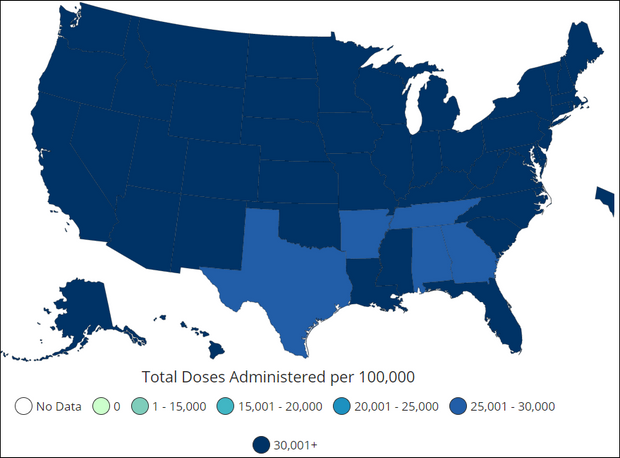 Centers for Disease Control and Prevention

Of the vaccines authorized for use in the U.S., the ones developed by Moderna Inc. MRNA, +3.64% and Pfizer Inc. PFE, +0.77% and BioNTech SE BNTX, +3.86% currently require two doses to be fully vaccinated while Johnson & Johnson’s JNJ, +0.25% vaccine requires one dose.

See related: Am I a jerk for getting a COVID-19 vaccine if I feel healthy and work from home?

• AstraZeneca PLC AZN, -0.17% defended its COVID-19 vaccine, saying there was no increased risk of blood clots, following moves by the Netherlands, Ireland and Germany, and a growing list of European countries, to suspend its use, as MarketWatch’s Lina Saigol reported. The suspensions come after there had been 15 events of deep vein thrombosis and 22 events of pulmonary embolism reported among those vaccinated by AstraZeneca’s vaccine, which is not authorized for use in the U.S. The drug maker said over the weekend that those cases were “much lower than would be expected to occur naturally in a general population” and is similar across other licensed COVID-19 vaccines.

Read also: ‘We are weary’: Life in Italy, one year after national lockdown to stop the spread of COVID-19.

• Moderna said Monday that it began dosing participants in the Phase 1 clinical trial of its next-generation COVID-19 vaccine, which is being tested to see if it can be stored in standard refrigeration so that it can be administered in a wider range of locations and regions, as MarketWatch’s Jaimy Lee reported. The same vaccine candidate is expected to also be tested as a booster shot for those who had already been vaccinated.

• Facebook Inc. FB, +1.52% said Monday that it was launching a tool to show people when and where they can get vaccinations, and that it will provide a link to make an appointment. The social media company said it was working with governments to expand WhatsApp chatbots to help people register for vaccines.

• Paris may be headed toward a new lockdown, as new variants of the coronavirus that causes COVID-19 have led to intensive care units nearing capacity and as limited vaccine supplies drag down inoculation efforts, as the Associated Press reported. City officials warned that the situation is worsening, and a lock down will be implemented if needed, saying a nationwide 6 p.m. curfew wasn’t enough.

The global tally for confirmed cases of the coronavirus that causes COVID-19 climbed to 120,002,856 on Friday, according to data aggregated by Johns Hopkins University, while the death toll rose to 2,655,755.

More than 68 million people have recovered from COVID, the data show.

China, where the virus was first discovered late last year, has had 101,408 confirmed cases and 4,839 deaths, according to its official numbers.