Home
Stocks
The Tell: Office property values could plunge by 54% if work-from-home lasts: Fitch
Prev Article Next Article
This post was originally published on this site

Investors in trophy U.S. office buildings could be in for a rude awakening.

That’s the takeaway of a new report from credit-rating firm Fitch Ratings, which shows potentially dire outcomes if the 65% of U.S. office workers who can do their jobs from home don’t return to the office full time.

The report breaks down how workers staying home, even a day-and-a-half each week on average, after the threat of the pandemic subsides could spell trouble for owners of office buildings by slashing property values by 44.5%.

Property values could tumble 53.8% if workers and companies adopt a more “severe” scenario of staying home three days a week, on average, over the longer term, per this Fitch chart. 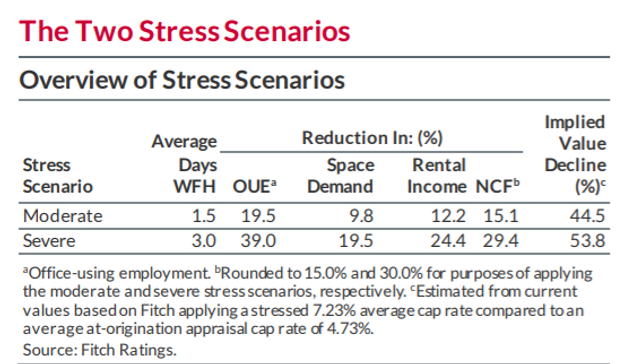 The report centers on large, single-asset and single-borrower properties financed from 2012 to 2020 in the $600 billion commercial mortgage-backed securities, or CMBS, market, which Fitch monitors from a ratings perspective.

“A large-scale secular shift in working practices could ultimately pressure even the most resilient properties,” a team led by Fitch’s Steven Marks wrote this week.

Under its stress scenarios, Fitch expects 25% to 55% of single-asset, single-borrower property bonds currently in the coveted investment-grade category to fall into “junk” or speculative-grade territory, which can pull bond prices lower.

Moreover, about 22% of the bonds in the sector could experience losses, under the severe stress scenario, Fitch said.

The startling report comes amid jitters that higher government bond yields TMUBMUSD10Y, 1.625% could lead to a spike in borrowing costs for businesses, households and real estate owners, potentially leading to distress.

The week also marked the first anniversary of the World Health Organization declaring a pandemic. Roughly 10% of the U.S. population now has been fully vaccinated against COVID-19. And to mark recent strides toward combat the threat, President Biden vowed on Thursday to have vaccines available to all by May.

Despite progress on the public-health front, significant uncertainly still hangs over U.S. commercial real estate properties, including about how much companies will be willing to spend on corporate travel in the months and years ahead, which could further hamper the reeling hotel sector.

Office properties, unlike hotels, often have long-term leases of about a decade, which has helped keep the rate of problem loans, within bond deals, in check, according to Trepp.

But after a year of work-from-home, even existing office leases may face pressures from the pandemic, as companies rush to sublet unused space or flock to shorter, more flexible lease arrangements.