Home
Stocks
: Companies declared ‘Black lives matter’ last year, and now they’re being asked to prove it
Prev Article Next Article
This post was originally published on this site

Shareholder advocacy groups that have long pushed for social change are asking social media companies, banking giants and other corporations that declared their commitment to racial justice in 2020 to back their words with actions this year.

Many U.S. companies stated solidarity with the Black Lives Matter movement last year: two-thirds of S&P 500 SPX, +1.95% companies made supportive statements after the death of George Floyd, a Black man, at the hands of a Minnesota police officer last May led to widespread protests, while 36% made financial contributions to racial justice organizations and 14% actually stated “Black Lives Matter,” according to As You Sow, a California-based group that promotes environmental and social corporate responsibility.

Read: Women could pave the way for ESG investing in the U.S.

A lot of those same companies have suggested their shareholders vote against resolutions that sought to improve Black lives in recent years, though. Natasha Lamb, managing director of Massachusetts-based shareholder advocacy group Arjuna Capital, recalled that Amazon.com Inc. AMZN suggested shareholders reject proposals last spring seeking greater disclosure of racial and gender pay gaps. But after Floyd’s death and the police killing of Breonna Taylor in Kentucky, Amazon splashed “Black Lives Matter” on its home page and donated $10 million to the NAACP and other groups.

“After those [resolutions] went to a vote, George Floyd was killed, all these companies started putting out statements of solidarity,” Lamb said. “All we could do was look at those statements and say, ‘You just had these proposals that you opposed.’”

Lamb and other advocates for using shareholders’ voting power to push for change are hoping enhanced awareness of these issues will lead companies and their investors to approve resolutions this year that call for racial-equity audits, disclosure of additional pay-gap information and more.

But it remains to be seen whether the racial reckoning that began last year will actually lead to broader corporate and shareholder support. Arjuna is bringing back the same resolution at Amazon and other companies that previously rejected it, including Intel Corp. INTC, +4.13%

While the companies already disclose some pay information, Arjuna is asking them to report unadjusted median pay-gap data, which it believes can paint a fuller picture of pay inequity at companies.

“The median gap gets at ‘are you moving people up the ladder, are you closing these structural gaps,’” Lamb said.

Intel said it has no comment on this year’s proxy, while an Amazon spokeswoman said, “We believe that people should receive equal pay for equal work, regardless of gender, race or ethnicity.”

Read: This California investor predicts a 10-year ‘good economy’ revolution that shoves the sharing economy aside

Amazon, which last year held its shareholder meeting in May, is already fighting such proposals before it even releases its proxy, however, and using its “Black Lives Matter” response as a reason. One of the proposals — which pushes for a civil rights, equity, diversity and inclusion audit and is led by the New York State Common Retirement Fund — mentions the company’s firing last year of Chris Smalls, a Black worker who led a walkout over COVID-19 safety concerns and who was described by the company’s general counsel as “not smart or articulate,” as well as the disproportionate number of Black and Latino workers who are “paid low wages and exposed to dangerous working conditions.”

Amazon has challenged the resolution, saying in a letter to the Securities and Exchange Commission in January: “The Company’s commitment to diversity, equity, and inclusion is reflected in a number of its policies and position statements.” In the letter, the company also pointed to its donations to racial justice organizations.

Barron’s: Here Are the Leading Companies on Gender and Racial Diversity, Climate, and Covid-19 Response

Dozens of resolutions have been filed

The Interfaith Center on Corporate Responsibility, or ICCR, comprises more than 300 member organizations that have so far filed 244 shareholder resolutions this year. Of those, 64 are related to racial justice and diversity, a 50% increase from last year and the highest number ever for such proposals for the investor coalition, according to its resolutions and voting guide for this proxy season, which will begin in the spring.

Social-media companies and banks are some of the biggest targets. Arjuna is pushing Facebook Inc. FB, +2.58%, Alphabet Inc.’s Google GOOGL, +3.10% and Twitter Inc. TWTR, +0.30% to add board members with human- and civil-rights expertise, saying that “these social media powerhouses have encountered criticism for perpetuating racism and hate speech on their platforms.”

Lamb said the three companies — which all expressed support of the Black Lives Matter movement and pledged donations to different racial justice organizations last year — are so influential and such “integral parts of people’s information bubbles” that asking them to put human- and civil-rights experts on their boards is “akin to asking Exxon XOM, +3.78% to add a climate change expert to its board.”

“What are the fundamental issues at these companies that racism, sexism and misinformation have become synonymous with their business models?” Lamb asked.

“We have continued to make progress in addressing civil and human rights issues across our services, as well as hiring at the senior leadership level,” a Facebook spokesman said. “We intend to provide additional disclosure on our efforts in the near term.”

Arjuna has had some success with similar proposals over the past few years. In December, it withdrew a resolution at Adobe Inc. ADBE, +0.40% after the software company agreed to provide gender-pay disclosures immediately and median racial pay-gap information by the end of this year. Adobe became the first tech company to agree to the disclosures, joining a handful of other major companies — such as Citigroup Inc. C, +0.60%, Starbucks Corp. SBUX, +0.30% and MasterCard Inc. MA, +3.26% — that have made the promise after pressure from Arjuna. The group also recently withdrew such a proposal at Bank of New York Mellon BK, +0.60% after the bank agreed to disclose the pay-gap data.

Other banks are or could be facing race-related shareholder resolutions this proxy season. CtW Investment Group is working with the Service Employees International Union and is in various stages of urging Bank of America Corp. BAC, +1.18%, Wells Fargo & Co. WFC, +0.73%, Citigroup Inc. C, +0.60%, Goldman Sachs Group Inc. GS, -0.58%, Morgan Stanley MS, -0.30% and JPMorgan Chase & Co. JPM, +0.23% to “conduct a racial equity audit that identifies, prioritizes, and remedies the adverse impacts of the bank’s policies and practices on non-white stakeholders and communities of color,” according to its website.

All of these banks, which Waizenneger called “critical players” in equity issues, stated their support for racial justice last year.

“We saw Jamie Dimon taking a knee,” said Waizenegger, referring to the JPMorgan CEO who stopped by a New York branch last June and imitated a gesture popularized by former NFL quarterback Colin Kaepernick to protest police brutality and racism. 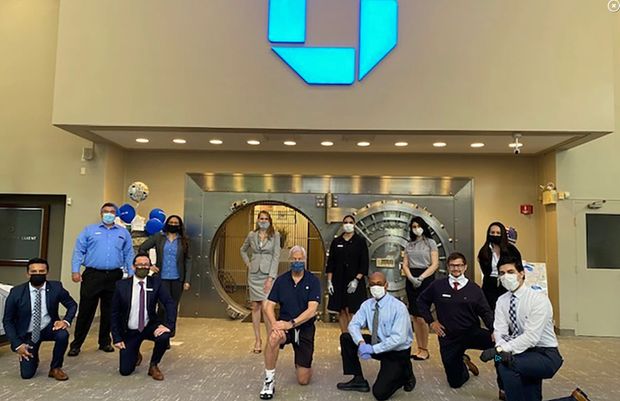 The banks have vowed to spend millions or even billions of dollars over the next few years in an effort to make things — like housing, jobs training, funding to small business, etc. — more equitable. “This is all great, but how do we know it’s really effective?” asked Waizenegger. “[The audits] would help not just to reassure shareholders but also other stakeholders that they’re actually going beyond just a photo opportunity.”

The resolution will be on Citi’s proxy, though the company tried to exclude it, Waizenegger said.  It includes the following language: “Citi donated $242,000 during the 2020 election cycle to 74 members of Congress who are rated ‘F’ by the NAACP.”

“Citi is acutely focused on addressing racial inequity, especially in terms of the wealth gap it creates,” a Citi spokeswoman said. “We’ve committed over $1 billion in business initiatives to expand access to credit, invest in Black entrepreneurs, support Black homeownership, and advance anti-racist practices in the industry.” She also said the company is trying to increase Black representation in its workforce.

One company is facing what Lamb calls “a new angle” of a resolution: Arjuna is proposing that global insurance provider Chubb CB, +3.42% examine how insuring municipalities affects police brutality, which are often settled with monetary payouts.

“The literature that we’ve read on this suggests that there’s an incredible amount of power that insurers have in terms of policy, training and how police departments perform,” said Lamb, who added that the resolution asks Chubb to “either reduce or not increase potential for police brutality.”

Chubb opposes the proposal. In a letter to the SEC in January, Chubb said its “activities to promote good corporate citizenship [include] promoting better relationships between police departments and their local communities.”

Read: California bill would expand protections for workers to speak out about harassment or discrimination

Investor groups say companies will continue to try to block and oppose many of their resolutions, and they expect to continue putting sustained pressure on them. Their hope for this year is that the environmental, social and corporate governance movement that has gained steam in the past few years could lead to investors aligning with the proposals at this year’s shareholder meetings no matter what the companies say.

“I think we’re going to see much broader investor support [for these resolutions]” said Meredith Benton, a consultant with As You Sow and a principal at Whistle Stop Capital. “Two years ago, there was confusion about whether all this was a material issue, and that confusion is gone.”