Armen Henderson said he did everything he was supposed to do.

He had earned scholarships to college, still worked multiple jobs to minimize any extra costs, and then became a doctor. Yet, he’s still not on a stable financial footing.

When Henderson was a medical resident, a period during which he worked long hours for relatively low pay, he and his wife lived paycheck to paycheck and struggled to afford quality child care for his daughter. For those three years, Henderson deferred payments on his student loans, but the interest was still accruing.

By the time he left residency, Henderson’s debt load ballooned to $600,000.  Without some relief, Henderson said he expects to be paying off his loans for the rest of his life. Though Henderson would like to have faith that his loans will ultimately be discharged as promised by the government after ten years of public service, the headlines surrounding the challenges others have faced getting access to the Public Service Loan Forgiveness program, don’t give him much hope. 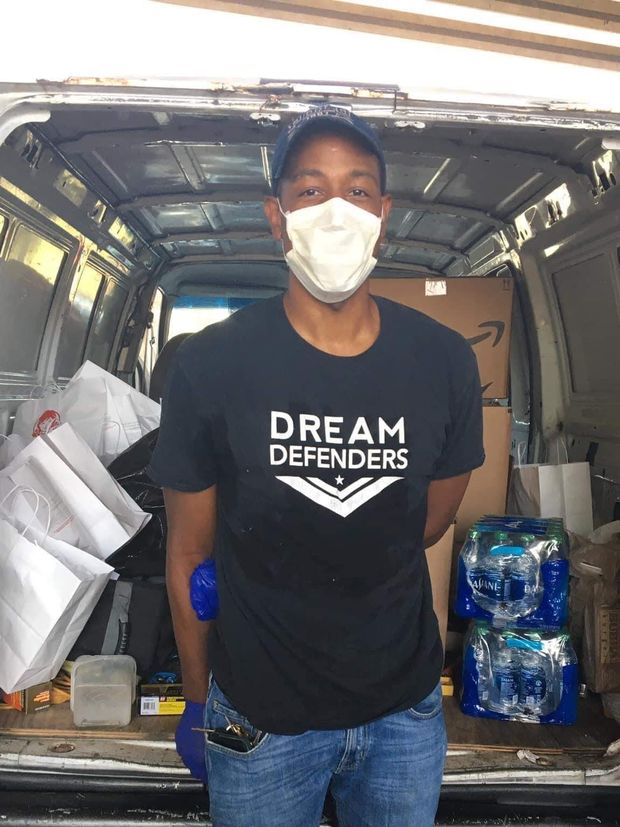 When he’s not seeing patients as an internist, Armen Henderson works with the Dream Defenders, a group organizing Black and Brown youth to build power in communities. During the pandemic, he’s distributed supplies and administered COVID-19 tests to the homeless.

“I’m also a Black physician, they’re already slim to none,” he said. “During a pandemic in which we see the need for healthcare professionals to be at the front lines fighting the pandemic, I’m stressed about my loans.”

Now, Henderson is part of a group of 100 borrowers taking part in a debt strike, or not paying their student loan bills, with the goal of pushing the Biden administration to cancel the outstanding $1.7 trillion in student loans in their first 100 days.

The strikers were organized by the Debt Collective, a group of activists that has been working for years to build collective power among debtors. The idea is that, similar to a workers’ union, this group of debtors can exert leverage on their creditors.

When the The Debt Collective first proposed cancelling student debt during Occupy Wall Street, it was considered radical. But as more research has emerged estimating the economic impact of student-debt cancellation and the disproportionate impact of student debt on Black households, the idea has gained support.

Now a coalition of think tanks, labor unions, civil-rights groups and college counselors endorse it. And Democratic Senators Elizabeth Warren and Chuck Schumer are urging the President to cancel up to $50,000 in student debt. The Biden administration has said they’re reviewing whether there’s any action they can take.

“The knowledge that Biden has the authority to cancel all federal student debt — that knowledge has penetrated pretty deeply into the public at this point,” said Thomas Gokey, one of the founders of the Debt Collective and one of the 100 strikers. “We have a real moment here to make sure that he uses that power.”

Of course, student-debt cancellation and the idea that Biden can do it himself is controversial. A policy of unlimited student-debt discharge would provide a bigger benefit — at least measured in dollars — to those with the highest debt loads. And because six-figure student-loan balances are often often associated with graduate education, which is also often associated with higher incomes, critics worry that discharging student debt could provide a boon to the well-off.

Even among those who support the idea of student-debt cancellation, there’s debate about whether the President can and should use his executive authority to do it.

“I appreciated it when they started, I appreciated that it was a necessary pressure if we’re going to get to a place where we deal with the underlying problem of student debt,” David Bergeron, a senior fellow at the Center for American Progress who supports broad-based student debt cancellation, said of the Debt Collective.

But he worries the group’s “extreme” approach to the issue of student-debt cancellation will make it difficult to solve the border problems surrounding the college finance system. Any effort to make college free — a measure the Debt Collective supports — would require legislative action.

That’s part of the reason why Bergeron, who worked at the Department of Education for three decades, prefers a legislative approach to the issue. He also worries that efforts to cancel student debt through executive action could open the policy up to legal challenges by student-loan companies and other firms involved in the student-loan collections process and result in taxable forgiveness.

“We have to deal with the two things at the same time student loan debt — and free college — and make sure that in dealing with student-loan debt that we don’t create unintended consequences,” he said.

But supporters, including legal experts at Harvard and Georgetown Universities have argued in memos that the Higher Education Act gives the Secretary of Education the authority to cancel student debt and that there are a variety of ways that the executive branch could act to prevent borrowers from facing a tax bill.

More broadly, they say, cancelling debt through executive action is the best shot at providing relief in a way that doesn’t repeat the obstacles borrowers face accessing student loan forgiveness programs already on the books.

“An executive order would avoid asking student borrowers to jump through unnecessary hoops, to complete yet another round of paperwork, and to endure the humiliation of being treated as if they are trying to acquire something they don’t deserve,” a group of more than 900 scholars wrote in a letter to Biden.

The group decided to write the letter to explicitly connect academic research on racial and class inequities to activism surrounding student debt, said Charlie Eaton, an assistant professor at the University of California Merced and one of the authors of the letter, and to push back on the idea that student-debt cancellation would disproportionately benefit the well-off.

“Some of the suggestions that it’s not progressive treats the universe of people who would benefit as just the borrowers rather than thinking about the entire universe of students,” Eaton said. “Most wealthy former students never borrow at all and so they would receive zero benefit from debt cancellation.”

Reminiscent of an earlier strike

Given the controversy both in research and political circles around student debt cancellation, it faces steep obstacles, but the Debt Collective has been there before. In 2015, the group organized a group of former for-profit college students to stop paying their student loans. That effort ultimately pushed the Obama administration to streamline the process borrowers can use to have their loans cancelled when they’ve been defrauded by their schools.

In the wake of the collapse of Corinthian Colleges, a chain of for-profit schools, amid allegations that the school misled students — including those who were striking — about job placement and graduation rates, borrowers, largely organized by the Debt Collective clamored for relief under the law. Many were successful.

Now, Gokey believes the country may be ready to go further. “A lot of people basically understood that for-profit schools were bad, now I think there’s a much broader sense that actually cancelling student debt no matter what school you went to is a good and positive thing to do,” he said.

During the Corinthian strike, the Debt Collective ensured that participants were striking safely in part by taking advantage of income-driven repayment, the suite of plans the government offers that allows borrowers to repay their debt as a percentage of their income; those payments can be as little as $0 a month.

Today, the opportunity to strike safely has expanded even further. The coronavirus-era student-loan payment pause means that the strike participants are able to not repay their federal debt, stay current and not worry about interest building on their loans.

“In a way there is a massive debt strike going on,” Gokey said. “We’ve been told always that the sky would fall if people stopped paying their student debt and now we know that’s just not true.”

If Biden and the Department of Education don’t cancel student debt within the first 100 days, the Debt Collective has plans to escalate their campaign, Gokey said. Without cancellation, Gokey expects “mass resistance,” when payments get turned back on. Right now, payments and collections on student loans are scheduled to resume in October.

Bergeron said that if the Biden administration doesn’t achieve student debt by executive action, it’s likely not for lack of trying. The Department of Education recently announced a slew of new political appointees, including some who have previously argued that the President has the authority to cancel student loans.

“It’s really important that the administration has brought in a strong political leadership team and to bring in people who are predisposed to do it,” Bergeron said of cancelling student debt administratively, “So that if ultimately they decide they can’t do it, it’s not for want of trying.”

In the meantime, Henderson is still waiting for relief.

“My generation was told that if you go to school and you study hard, you can get a job and you can live the American Dream, whatever that means,” he said. “What we found is that people are moving in with their parents, rent is too expensive, food is too expensive, livable wages are stagnant, and people have debt hanging over their heads.”