Home
Stocks
Currencies: ‘All rallies in the dollar should be sold’ until this piece of the global economy changes
Prev Article Next Article
This post was originally published on this site

The beaten down U.S. dollar began 2021 with a bounce, but it’s likely to prove fleeting as long as global manufacturing and trade continue to recover from last year’s global recession in the wake of the coronavirus pandemic, one analyst warned on Thursday.

“All rallies in the dollar should be sold during this phase. We expect this to last at least until Q3 2021,” wrote Gaurav Saroliya, director of macro strategy at Oxford Economics, in a note.

The ICE U.S. Dollar Index DXY, +0.02%, a measure of the U.S. currency against a basket of six major rivals, was on track for a 0.7% decline this week. The index was up in four of the first five weeks of the year after finishing 2020 near a 2 1/2-year low, having tumbled by around 13% from a March high last year set amid a global scramble for dollars resulting from the financial market chaos as the COVID-19 pandemic nearly shut down the world economy.

The dollar’s early 2021 bounce was attributed in part by analysts to outsize bearish bets on the currency by speculators, leaving the market vulnerable to a bout of short covering as selling pressure ran out of steam. But Saroliya argued that positioning-related bounces tend to be short-lived.

The central tenet of the research firm’s dollar view is that periods of global industrial expansion are negative for the dollar because these periods, with “empirical regularity,” tend to see stronger growth outside the U.S., he said.

For evidence that global industrial activity remains in a powerful upswing, investors can look no further than the rally in commodity markets, with crude oil and industrial metals surging in unison “in a rally which has some signs of a multiyear commodity bull market, given the supply deficits relative to expected demand recovery this year,” Saroliya said.

Investors are taking notice. Marko Kolanovic, JPMorgan’s closely followed quantitative analyst, this week argued that a fifth commodity “supercycle” was under way. Several high profile commodity traders late last year argued that post-pandemic ingredients, including pentup demand, ultralow interest rates and the potential for a cyclical decline in the value of the U.S. dollar, were laying the groundwork for a multiyear bull market for commodities.

Read: How a weaker dollar could help fuel a commodities boom in 2021

A weaker dollar has also been touted as bullish for the stock market, both in the U.S. and abroad. U.S. benchmarks have continued to march into record territory in 2021 despite the dollar’s modest bounce. The Dow Jones Industrial Average DJIA, -0.02% is up 2.6% so far this year, while the S&P 500 SPX, +0.17% has gained more than 4%.

Meanwhile, there may be plenty more room for the dollar to fall and for commodities to rise. 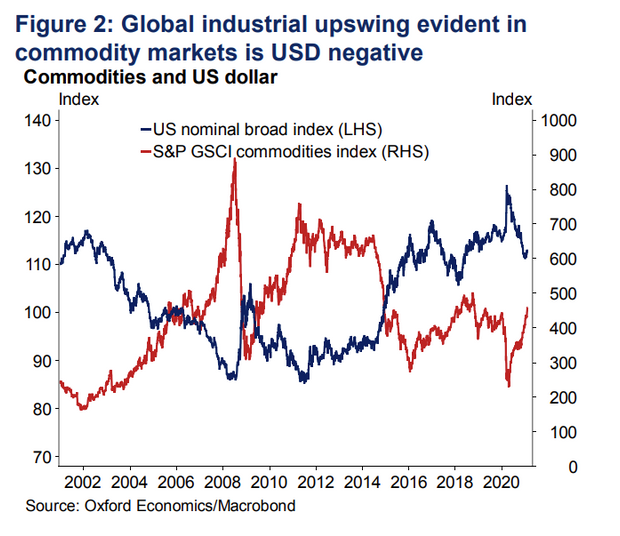 Meanwhile, “the flows that really matter” will be those linked to long-term trends, including persistent capital outflows from the U.S. into markets with higher expected returns, he said.

Saroliya said that deleveraging of corporate balance sheets after record debt creation last year could set the stage for a multiyear stretch of subdued economic growth. If so, “U.S.-based capital will likely look for investment opportunities outside the U.S., he said.