Home
Stocks
Deep Dive: 24 bank stocks with dividends of at least 3.57%, three times what 10-year Treasurys pay
Prev Article Next Article
This post was originally published on this site

When the coronavirus pandemic hit the U.S. full force in March, bank stocks sank because investors’ memories of the credit crisis of 2008 — and the dangers of holding bank stocks during a recession — were still fresh.

Now banks are on the upswing, but the stocks are still cheap.

Below are three screens of bank stocks by dividend yield, and price-to-book and price-to-earnings valuations.

Capital One Financial Corp. COF, -0.06% was one of only two large national U.S. banks to cut its quarterly dividend to shareholders during the pandemic. The other was Wells Fargo & Co. WFC, -0.42%.

Capital One cut its quarterly payout to 10 cents from 40 cents in July. Then on Feb. 4 the 40-cent quarterly dividend was fully restored.

After a dividend cut, a company might be expected to increase its payout gradually as economic or business conditions improve, but Capital One’s confident move signals that “the banks have come full circle,” according to Christopher Marinac, director of research at Janney Montgomery Scott. The firm provides investment banking and other services to banks, and Marinac’s analyst group covers hundreds of small and regional players.

“Banks trade off tangible book value and future earnings,” Marinac said during an interview. “When the crisis began in March, everyone began to mistrust earnings and book value,” because they feared both were threatened by loan losses.

Now, almost a year later, after banks set aside reserves for anticipated loan losses (which lowers earnings) and more recently started to transfer money away from reserves (which boosts earnings), Marinac believes “credit is no longer a problem.” That’s even as moratoriums on foreclosures and evictions are expected to be lifted as the pandemic subsides.

“Banks know what they have out there — they know what the forbearance risk is and a lot of it has been incorporated into loan loss reserves,” he said.

Marinac said the provisions for loan loss reserves by Bank of America Corp. BAC, -0.42% and J.P. Morgan Chase & Co. JPM, -0.40% during the first half of 2020 were “some of the biggest percentage builds I have every seen.”

Wells Fargo cut its quarterly dividend to 10 cents a share from 51 cents in July. The bank hasn’t yet announced any dividend increase and its situation is much different from Capital One’s, because of continued scrutiny by regulators (and politicians) after several customer service scandals that first came to light in 2016.

Marinac called Wells Fargo “this era’s J.P. Morgan Chase,” referring to JPM’s years of fines paid to regulators in the wake of the 2008-2009 credit crisis.

“The answer is keep writing checks to various agencies. That is a way out of a ditch,” Marinac said.

Looking ahead, in light of Wells Fargo’s capital strength, “the question is when they can get back” to deploying capital through share buybacks or dividends, he added.

Odeon Capital Group analyst Richard Bove rates Wells Fargo a “buy,” with a price target of $37.10, which is 14% above the stock’s closing price of $32.56 on Feb. 5. Then again, a 12-month price target doesn’t tell the full story. In a note to clients on Jan. 17, Bove wrote that for the next three to five years, Wells Fargo “could be a superior investment if anyone chooses to look out that long.”

He said the bank’s new management team “has enunciated a program that is likely to turn this company around.” 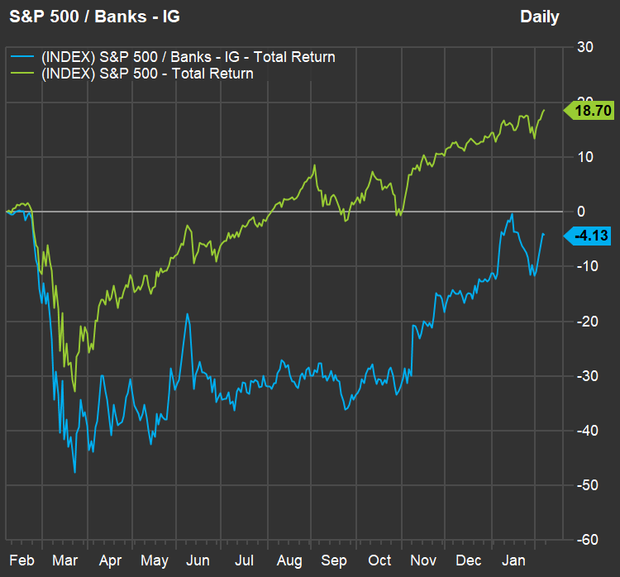 So you can see that despite the big move since October, the banks are far behind the S&P 500.

When asked about relative price-to-earnings valuations for banks against the overall market, Marinac pointed to the SPDR S&P Regional Banking ETF KRE, +1.21%. Here’s a comparison of forward P/E ratios (based on consensus estimates among analysts polled by FactSet) for that benchmark against the S&P 500 since the end of 2019: 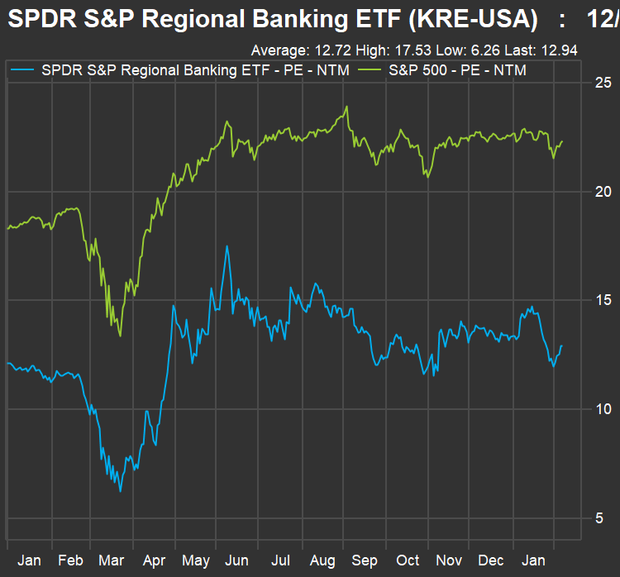 Marinac said there is no shortage of banks with dividend yields of at least twice the yield of about 1.16% on 10-year U.S. Treasury notes TMUBMUSD10Y, 1.169%.

Scroll the table to see all the data.

New York Community Bancorp Inc. NYCB, +3.05% has the highest dividend yield on the list, at 6.53%. Having a high yield means that some investors, at least, expect the bank won’t be able to maintain the high payout. But confidence has been building. The stock gained 25% from the end of October through Feb. 5, excluding dividends. The stock also trades relatively low on a forward P/E and price-to-tangible book basis.

A bank’s tangible book value is its book value less intangible assets, such as loan servicing rights. A price/TBV ratio below 1 is generally considered to be very cheap. Among the “big six” U.S. banks, Citigroup Inc. C, -0.83% is the cheapest by that measure, with a ratio of only 0.8%, as you can see below.

It is not unusual for a bank acquired by a rival to sell for twice tangible book value or higher.

Here’s a summary of opinion about this high-yield group of bank stocks among Wall Street analysts polled by FactSet:

Starting again with the largest 100 U.S. banks by total assets, here are the 25 trading lowest to tangible book value:

Leaving the group in the same order, here’s a summary of analyst opinion about the low price/TBV group:

You can see the analysts are enthusiastic about Citi’s prospects.

Among the 100 largest U.S. banks, here are the 25 trading lowest to consensus earnings estimates for the next 12 months among analysts polled by FactSet:

And here’s a summary of analyst opinion for the low forward P/E group:

Citigroup made two of the three groups above. Here’s the same data for the six largest U.S. banks by total assets:

And here’s a summary of analyst opinion for the big six:

If you see any attractively priced stocks listed here, or hunger for some high dividends, your next move should be to do research to form your own opinions about the banks’ ability to remain competitive over the next several years.

Don’t miss: These S&P 500 stocks have had the biggest increases in ‘buy’ ratings so far this year