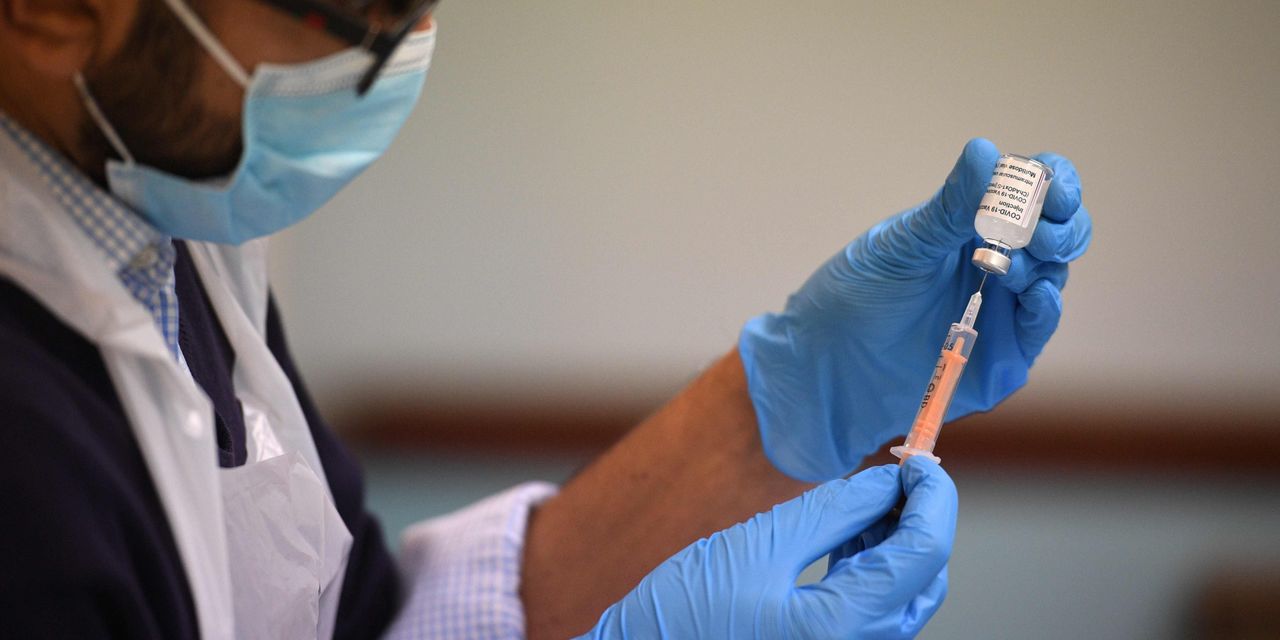 The global case tally of confirmed cases of the coronavirus-borne illness COVID-19 climbed above 107 million on Monday, with the U.S. accounting for more than 27 million of that total, even as cases continue to decline and the post-holiday surge abates.

The U.S. added 87,889 new cases on Sunday, according to a New York Times tracker, and at least 1,301 people died, although those numbers may be underreported given reduced staffing at hospitals at weekends. The U.S. has averaged 118,016 new cases a day in the past week, down 31% from the average two weeks ago.

Hospitalizations are also steadily declining, according to the COVID Tracking Project. There were 81,439 COVID-19 patients in U.S. hospitals on Sunday, down from 84,233 a day earlier. The number has now declined for 24 straight days and stands at its lowest level since Nov. 18.

Average daily cases are now down 60.3% from their peak and average daily hospitalizations are down 33.3%, according to Raymond James analyst Chris Meekins.

” While time is passing from the frequent congregations of the holiday season which contribute to increased cases, and a larger portion of the population (up to one-third) likely already contracting the virus; in our view vaccinations are the leading contributor to the improving state of the pandemic in the U.S.,” Meekins wrote in a note to clients.

See now: I got my COVID-19 vaccination. Now what? Can I get on a plane, or visit my family? Do I still need to wear my mask?

And while for now, vaccine demand is outpacing supply, “that will likely change within two months when it will become critical to convince the half of the population not as eager to get the vaccine that they need it despite the lower case counts,” he wrote.

Dr. Ashish Jha, dean and professor of health services, policy and practice at the Brown University School of Public Health, said the U.S. is at a crucial phase given the new variants of the virus that are circulating and that are more infectious than the original virus.

Jha is optimistic that even if the vaccine developed by AstraZeneca PLC AZN, +0.98% AZN, +0.60% with Oxford University is less effective in dealing with the variant that emerged in South Africa, the other authorized vaccines — the one developed by Pfizer Inc. PFE, -0.26% and German partner BioNTech SE BNTX, +1.11%, and one developed by Moderna Inc. MRNA, +4.82% — will work.

The one-dose regimen developed by Johnson & Johnson JNJ, -0.00 which is under review for authorization is another reason for hope, he said. The other vaccines all require two doses, taken several weeks apart.

“And we can update the vaccines,” he said, a process than can be achieved in about six weeks and then tested.

South Africa has suspended its plans to inoculate front-line health care workers with the Oxford-AstraZeneca vaccine after a small clinical trial suggested that it isn’t effective in preventing mild to moderate illness from the variant dominant in the country, the Associated Press reported.

“The AstraZeneca vaccine appeared effective against the original strain, but not against the variant,” health minister Zweli Mkhize said on Sunday. “We have decided to put a temporary hold on the rollout of the vaccine … more work needs to be done.”

The World Health Organization is holding a meeting Monday about the latest news from South Africa.

• France is banning the use of homemade face masks in schools and ordering pupils to wear Category 1 masks, the Guardian reported. The health authorities informed parents on Sunday in an urgent note that outlined that new variants pose an immediate and serious risk that requires more stringent measures. Windows in classrooms will be opened for several minutes every hour to improve ventilation and distance rules have been increased to two meters in school canteens.

• South Korea will start testing pet cats and dogs in the capital Seoul if they come into contact with coronavirus-infected patients and show symptoms, the AP reported. Seoul official Park Yoor-mi told an online briefing that pets found infected with the virus must be quarantined at their homes or a city-run facility for 14 days. The central government last week released guidelines on virus tests on pets, after a cat in the southeastern city of Jinju became the country’s first animal confirmed to have COVID-19. The cat belongs to a mother and daughter who were among dozens of confirmed patients associated with a Jinju religious facility.

• Argentina has founds its first two cases of the Brazilian COVID variant in travelers from Brazil, Reuters reported. “The Amazonas P1 variant was recently detected in two samples, and the Rio de Janeiro P2 variant in two other travelers. All of them from Brazil,” Argentina’s Minister of Health Ginés González García said in a tweet. Argentina is currently ramping up its vaccination program with Russia’s Sputnik V vaccine. Argentina has had 1.98 million confirmed cases of COVID-19, with a total of 49,171 deaths, according to data aggregated by Johns Hopkins University.

• The German government will allow some people to jump the vaccination queue if the alternative is that doses go to waste, the AP reported. Health Minister Jens Spahn said new vaccination regulations that took effect Monday specifically envision limited departures from the set order of vaccinations if, for example, doses left over in the evening would go to waste. He suggested that local authorities draw up systems allowing individuals such as health and emergency service officials, and perhaps firefighters and police, to be prioritized for such jabs.

The global tally for confirmed cases of the coronavirus that causes COVID-19 climbed above 106.2 million on Monday, the Johns Hopkins data shows, and the death toll rose above 2.31 million. At least 59 million people have recovered.

The U.S. has the highest case tally in the world at more than 27 million and the highest death toll at 463,482, or about a fifth of the global total.

China, where the virus was first discovered late last year, has had 100,421 confirmed cases and 4,822 deaths, according to its official numbers.