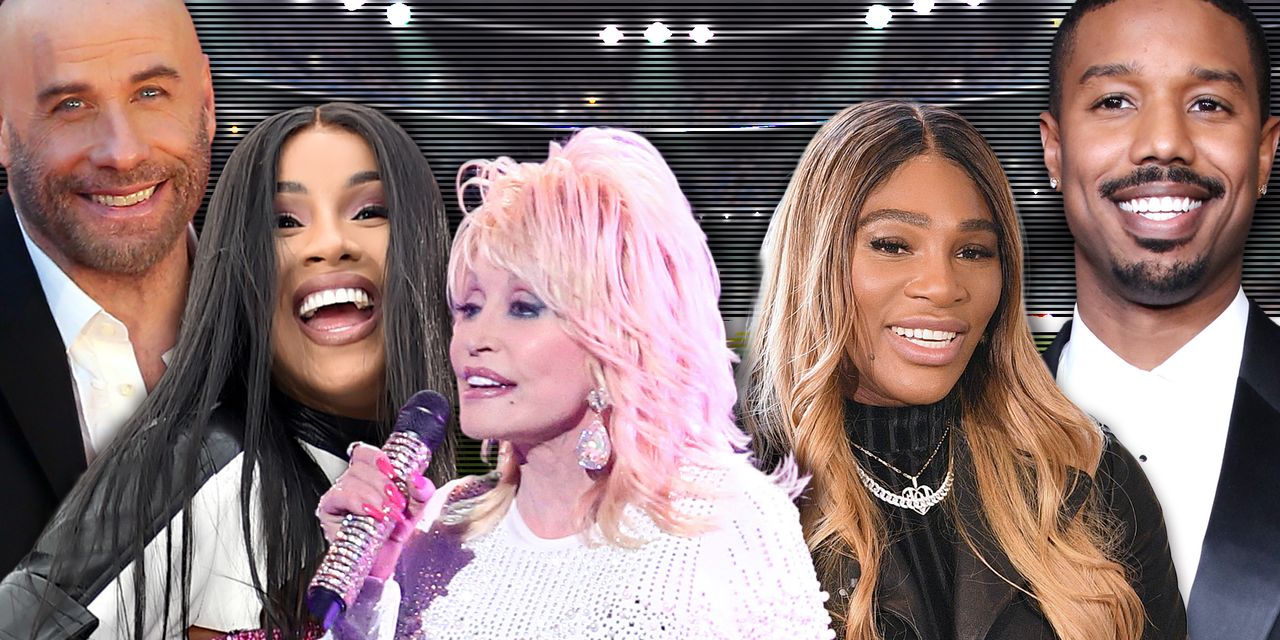 Coke and Budweiser may be benched from in-game Super Bowl ads this year, but one Big Game advertising tradition is still going strong: the celebrity endorsement.

Serena Williams, Dolly Parton, Lenny Kravitz, Cardi B, John Travolta, Martha Stewart, Michael B. Jordan, Will Ferrell, Awkwafina and Mila Kunis, to name just a few, have been tapped by the likes of Anheuser-Busch BUD, +0.12%, GM GM, +0.52% and Uber Eats UBER, +1.26% to promote products while keeping viewers entertained during this somewhat subdued Super Bowl because of the pandemic.

Just 22,000 fans will be in the stands when the Kansas City Chiefs face the Tampa Bay Buccaneers in Tampa, Fla. on Sunday; attendance has topped 100,000 some years, and never dipped below 61,946 prior to the pandemic.

Public health officials like Dr. Anthony Fauci are also calling on Americans to stay home and avoid house parties that could become superspreader events, and many bars and restaurants remain closed or can only operate at 25% capacity as part of local lockdown measures in many places.

And: Tickets for this year’s Super Bowl are more expensive than they’ve been in over a decade

That’s why Satya Menon, who leads the return-on-investment practice at global analytics firm Kantar, told MarketWatch that she was expecting to see a strong celebrity presence among this year’s ads as brands “bring in the big league players to help break through.” There are even rumors that Fiat Chrysler FCA, +1.94% has managed to snag the notoriously ad-shy Bruce Springsteen for its Jeep Super Bowl commercial.

And with ViacomCBS reportedly seeking around $5.5 million to $5.6 million for 30-second Super Bowl spots, falling back on popular celebrities is a tried-and-tested high-impact marketing tool.

What’s more, the tense and divisive social and political landscape of the past year has probably led companies to tread carefully in coming up with their commercial concepts this year, Menon said, and celebs are often a safe bet.

Super Bowl 2021: Why brands like Coke, Budweiser and Pepsi are benching their stars from in-game commercials this year

So expect to see stars — as well as plenty of humor — packed into the Big Game’s commercials this year.

“People do want a little more relief from all of the tension that is going on,” said Menon.

Here are some of the highlights:

Anheuser-Busch recently announced there would be no in-game Budweiser ads, but it has bought Super Bowl airtime for its Michelob and Stella Artois spots. The Michelob ad includes athletes like Williams, Anthony Davis, Jimmy Butler, Brooks Koepka, Peyton Manning, Billie Jean King, Usain Bolt, Arnold Palmer, Mia Hamm, Willie Mays and Wilt Chamberlain (phew) finding happiness in their pursuit of greatness, while the Stella spot stars Kravitz inviting viewers to invest in their 1 billion heartbeats by living in the moment — like, say, buying a beer.

John Travolta recreates his “Grease” dance moves with daughter Ella for Scotts Miracle-Gro SMG, -0.04%, which also features NASCAR’s Kyle Busch, “The Mandalorian’s” Carl Weathers, “The Office’s” Leslie David Baker and Peloton PTON, -5.86% instructor Emma Lovewell. Oh, and homemaking maven Martha Stewart pops up to remark that Travolta has “still got it” — when it comes to dancing, anyway — but no one’s lawn and garden can compare to her own.

Dolly Parton celebrates side hustles in Squarespace’s Super Bowl ad, which flips her 1980 hit “9 to 5” to embrace the gig workers who pivot to their passion projects during the off-peak hours from “5 to 9.” It’s the 40th anniversary of the movie “9 to 5,” and Parton told the Associated Press that she appreciated how the ad was “so into people, new entrepreneurs working after hours to start their own businesses.”

It’s getting some backlash, however, for glossing over the fact that many Americans are working side hustles because they simply can’t afford to live on one income.

“That ‘70s Show” co-stars turned real-life married couple Mila Kunis and Ashton Kutcher ham it up for the PepsiCo-owned PEP, +0.92% Cheetos. Their spot features Kutcher repeatedly catching Kunis orange-handed with his bag of the cheesy snacks in a parody of Shaggy’s 2000 hit single “It Wasn’t Me.” Shaggy makes a cameo, too, to celebrate his song turning 20 years old.

Funnyman Will Ferrell picks an electric vehicle fight with Norway in GM’s Super Bowl spot, and he picks up fellow comedians Kenan Thomson and Awkwafina for his trans-Atlantic trip to “crush those Lugers.” Apparently, Norway is selling more electric cars per capita than the U.S., and the “Anchorman” star won’t stand for it. The commercial features Ferrell driving a Cadillac Lyriq electric SUV and promotes GM’s Ultium electrical vehicle battery.

Uber Eats takes a stab at a most excellent throwback, with Mike Myers and Dana Carvey reprising their “Wayne’s World” characters, who used to poke fun at product placement on “SNL” with knowing winks at the camera while pushing merch. Their commercial also features a Cardi B cameo, “shyeah!”

Finally, Amazon’s AMZN, +0.63% latest Alexa ad features “Black Panther” star Michael B. Jordan as the human embodiment of the A.I.-enabled digital assistant. He’s ready to satisfy one woman’s every need, from reading her recipes and dimming the lights, to reading her an audiobook in the tub — much to her husband’s chagrin.