Home
Stocks
Market Extra: Surge in shipping costs adds to inflation worries — ‘no one in the industry was prepared for this spike’
Prev Article Next Article
This post was originally published on this site

Already eyeing the potential inflationary surge sparked by further U.S. fiscal relief, investors may have to reckon with another source of inflation – rising shipping rates.

Rising demand for goods from consumers forced to work from home as businesses grapple with the COVID-19 pandemic combined with a lack of ships and containers to transport those wares has sent freight rates soaring at the start of this year.

“No one in the industry was prepared for this spike. We know logistical budgets have been blown out because of how unprepared importers were,” said Sri Laxmana, vice president of global ocean product at C.H. Robinson, a freight forwarder which handles 18 million shipments annually.

That, in turn, has raised concerns among some economists that import-dependent businesses faced with a rise in “pipeline costs” will pass them down to the consumer through higher prices, adding to the cocktail of inflationary pressures some fear is brewing in the economy.

Fees to ship containers from major Asian exporters have more than doubled in the past 12 months, according to data from S&P Global Platts. Importers now have to pay around $6,000 to ship a standard 40-feet long container from China, Korea and Taiwan to an East Coast port, compared to $2,500 at the start of last year. 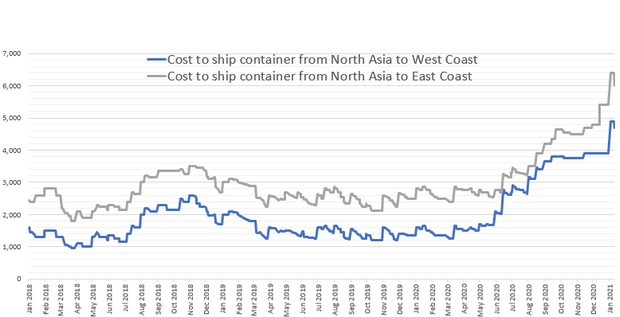 With the pandemic constraining how consumers can spend their money, many have rediverted funds that might otherwise have gone into restaurant meals and airplane tickets into furniture, electronic equipment, and other imported goods pumped out of Chinese factories, said Andreas Rees, an economist for Unicredit.

This comes as investors fret whether inflation could make a return as additional fiscal aid arrives from Washington and widespread distribution of coronavirus vaccines allows more service-based industries to reopen.

Concerns over inflation, in turn, have spilled over into all corners of financial markets, sending stocks SPX, -1.37% and long-term government bond yields TMUBMUSD10Y, 1.014% higher.

Bond investors’ expectations for a rise in consumer prices over the next decade average 2.08%, above the Fed’s inflation target and up nearly 1.50 percentage points since last March when fears of the pandemic rattled Wall Street.

Read: Think higher inflation is coming? The Fed will believe it when it sees it

But economists have traditionally concentrated on stronger consumer demand rather than rising costs as a source of price pressures in part because manufacturers have, in the past, lacked the willingness or power to pass increased expenses down to their customers.

“The last thing people want to do is raise prices,” said Laxmana.

Regardless, higher shipping rates are not going unnoticed.

The Fed’s survey of businesses across the U.S., or the Beige Book, said freight haulers in Cleveland reported strong demand and limited capacity allowed them to charge higher rates to customers.

And a survey of U.S. manufacturers conducted by IHS Markit in January showed supply chain delays were contributing to the highest rate of cost inflation in two and a half years.

“This source of pipeline inflation has not been driving consumer prices so far, but it could drive up the cost of goods going forward,” said Blerina Uruci, an economist at Barclays.

On that front, the arrival of the Chinese New Year holidays in two weeks could help ease shipping congestion as Chinese factories shut down production lines and workers return to their hometowns.

Yet unless the supply-chain disruptions and shifts in consumer behavior created by the pandemic goes away, elevated freight rates are likely to persist, said Laxmana.