Home
Stocks
: GameStop stock more than doubles to record high, then loses it all in another volatile day of trading
Prev Article Next Article
This post was originally published on this site 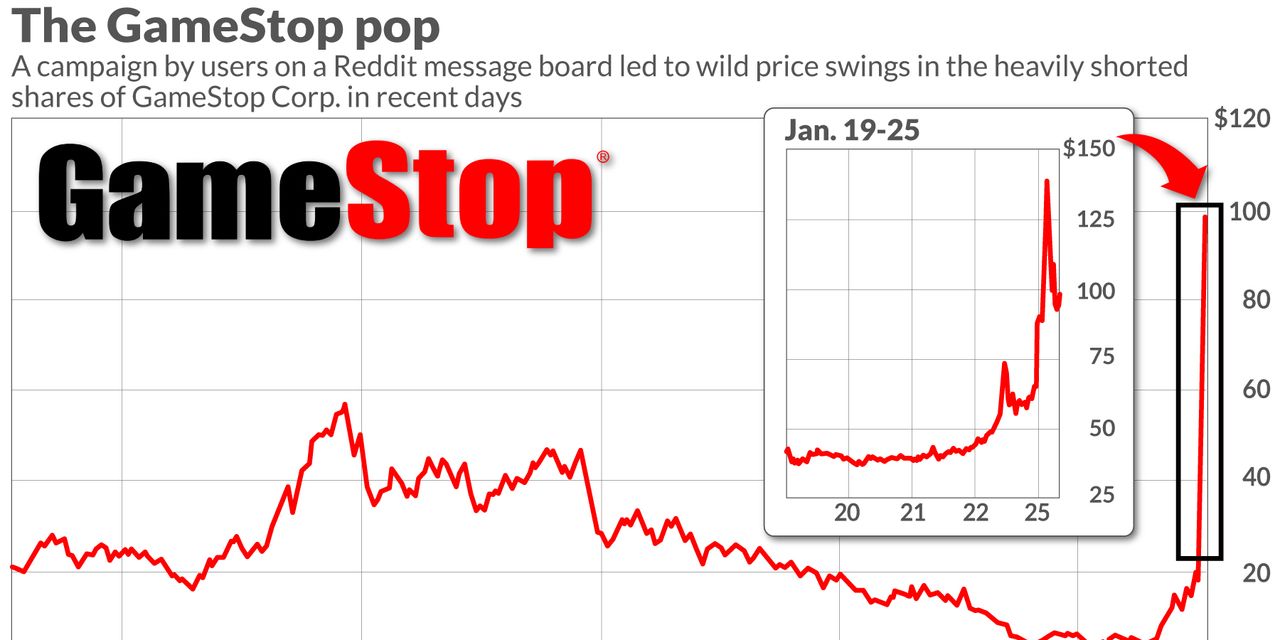 GameStop Corp.’s stock spiked past $150 Monday, then plummeted to a loss on the day in another volatile session as loyalists and short sellers clash about the value of the videogame retailer.

GameStop GME, +21.24% shares flew as much as 144% higher to an intraday record of $159.18 earlier Monday while being halted several times, then fell into the red on the day briefly before rebounding to gains of less than 20%. More than 126 million shares exchanged hands by midday on a stock that’s averaged daily volume of less than 9 million shares over the past 52 weeks.

In January alone, the stock has skyrocketed as much as 400% amid a battle involving a retailer that has been slammed by the COVID-19 pandemic and online purchasing of videogames. GameStop has been a darling of Reddit message board WallStreetBets, where hundreds of posters have been pushing for purchases of the stock after investors betting against the chain pushed short interest to more than 100%.

See also: ‘The mechanics of the market are breaking down,’ Jim Cramer says of GameStop madness

Short sellers have targeted GameStop stock as the pandemic added to issues with sales moving online. Noted short seller Andrew Left of Citron Research released a video late Thursday outlining points on why GameStop should be a $20 stock, then pulled back and claimed he and his family had been threatened. Shares began rallying midmonth with a 57% surge on Jan. 13, with five out of the next seven trading days logging daily gains of 10% or more despite a disappointing preliminary earnings report from the retailer. The stock finished up 51% on Friday after Citron canceled a planned live stream citing harassment and hacking attempts.

Ihor Dusaniwsky — the head of predictive analytics at financial technology and analytics firm S3 Partners, which specializes in analyzing data on short selling — told MarketWatch that GameStop is in a unique situation on the short side.

“We are seeing a short-squeeze on older shorts who have incurred massive mark-to-market losses on their positions, but are seeing new shorts coming in and using any stock borrows that become available to initiate new short positions in hopes of an eventual pullback from this stratospheric stock price move,” Dusaniwsky said.

“This is keeping overall shares shorted in GME relatively flat even though there is a significant short squeeze occurring in a sizable amount of existing short sellers,” Dusaniwsky continued. “Much like the revolutionary war, the first line of troops goes down in a rain of musket fire, but is replaced by the troops next in line.”

Dusaniwsky said that short sellers’ net mark-to-market losses are $6.12 billion this year, including a loss of $2.79 billion Monday, when the stock was up more than 60%.

For more: Reddit moderator on GameStop surge — ‘They hate that you played by the rules and still won’

GameStop has not released any news to coincide with the spike, and did not respond to a request from MarketWatch to comment. The Securities and Exchange Commission declined to comment on Monday about any potential investigations.

Earlier this month, GameStop admitted that holiday-quarter sales had dropped more than 25% and come in lower than expectations. Over the past two quarters, losses for the company have widened significantly, following a 2020 April-ending quarter where GameStop reported an adjusted loss of $1.61 a share versus the 7 cents a share in earnings it had reported in the previous year’s quarter.

Analysts expect adjusted earnings to rise 12% to $1.42 a share for the holiday-boosted January-ending period with revenue advancing 5% to $2.29 billion, compared with the year-ago period.