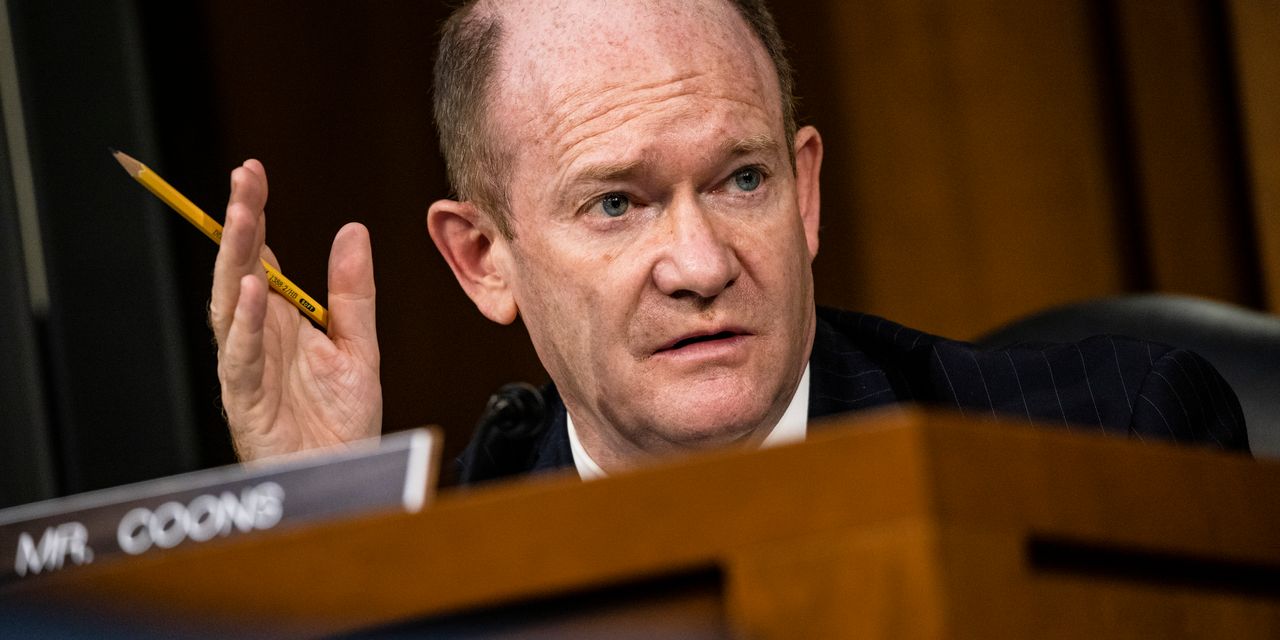 Coons sees the portfolio of options including electric vehicles and sustainable buildings, as well as carbon capture and sequestration (transporting and storing the captured carbon) — plus the political hot potato, nuclear energy, he said as part of a recent bipartisan panel for the Atlantic Council and Citizens for Responsible Energy Solutions, a right-leaning renewable energy advocate.

Coons specifically is backing advanced small modular nuclear reactors, described here from the Department of Energy. And, he added, any approach can’t neglect the needs of under-served communities where too much of already stretched paychecks can be lost to energy inefficiency and added health risks from pollution.

The clean-energy shift will create hiring that more than makes up for jobs lost to sunsetting the fossil-fuel industries, he said. He even adopts the phrasing that makes climate-change policy palatable across the aisle: “Bold market solutions” are part of what’s needed to slow global warming to at least 2 degrees Celsius as laid out in the voluntary Paris Agreement, Coons says.

Coons can now count a handful of business and industry lobbyists in the same camp: the Business Roundtable of top CEOs anticipates an eventual price on carbon, the Chamber of Commerce welcomed President Biden’s return to the Paris Agreement that the Trump administration quit, and even the Farm Bureau, whose agricultural industry is among the larger emitters that scientists blame for an accelerating warming, has come around. All now claim they are no longer standing in the way of U.S. climate-change policy and consider it vital to have a spot at the table to ensure that “market-based” ideas have their place.

Republicans generally lead their plans with carbon capture. It involves grabbing excess CO2 right from the power plant or other emitting source, ostensibly creating greener energy. Critics charge that this process too often takes the place of efforts to cut emitting altogether.

Coons’s Growing Climate Solutions bill, which got nowhere last year, has a co-signatory well distanced from the Delaware lawmaker on the political spectrum: Indiana Republican Sen. Mike Braun. They hope their bill sees new light in a Congress with a slightly different makeup. The House had its own version. And both chambers formed respective climate-change caucuses, although not without their critics: Democratic Senator Sheldon Whitehouse has called it the “do-nothing” caucus.

Now, Coons and the Democrats have a slim advantage in both houses which policy analysts say will still demand compromise on climate change. That worries some environmental activists who are concerned that more-immediate action to slow rising seas and severe storms will again be delayed. But climate-minded lawmakers are also working with a Joe Biden White House that is injecting climate-change expertise across all major agencies and departments, including Treasury, and has a dedicated crew to lift the U.S. profile on the global environmental stage.

Biden has called for $2 trillion in spending to reduce emissions to net-zero by 2050, while shoring up infrastructure and promoting electric vehicles, among other steps. He has pledged to stop new oil and gas drilling permits on some land, but won’t stand in the way of existing contracts.

Coons, on the Atlantic Council panel, said that as recently as five years ago when the Paris Climate Agreement was struck, a participatory Democratic delegation made the case for a strong U.S. role. A delegation of Republicans, he said, was clinging to climate change-denial language. “We want a bipartisan group to go to Glasgow,” where the next United Nations Climate Change Conference is scheduled for November, he said.

Also read: COVID-19 helped the U.S. near Paris emissions goals but the retreat will fade without renewables

A hopeful Coons said he senses a mood change in a short time. A handful of panel participants from both parties see climate-change policy moving ahead, if compromise and meaningful change can both prevail.

Here’s a sampling of viewpoints from the Atlantic Council panel:

— Past attempts on bipartisan climate-change policy included “too much shaming,” said Rep. John Curtis, Republican of Utah, who counts formerly coal-heavy counties among his constituents, which he said mostly lost out to cheaper natural gas.

— “The Green New Deal didn’t work,” said Rep. Darin LaHood, Republican of Illinois, whose district includes industrial giant Caterpillar CAT, -2.05% and Rivian, maker of electric delivery vehicles used by Amazon AMZN, -0.00%. “The all-of-the-above approach” mixing some traditional energy with renewables is favored by Republicans, he said. “Wind power in my district was slowed by the NIMBY argument, but now wind is everywhere. The EV tax credit was controversial but has helped, and we expect that market to continue to grow.”

— “We have to be prepared to say to the left and the right, follow the science… on nuclear. It has to be part of the future,” said Rep. Donald McEachin, Democrat of Virginia.

— “I’ve talked to U.K. [officials] and asked how they reached base load [the minimum level of demand on an electrical power grid], when using more renewables. We struggle with base load. And they said, nuclear,” added Curtis of Utah. “We have to make this discussion not based on the nuclear we know today, but on the smart nuclear we need for our future.”

— [When asked about rejoining Paris] “It is frustrating that progress is made in the U.S. private sector… clean air and water but what is the enforcement mechanism for other countries? If we can show there is an enforcement mechanism that will satisfy many critics,” said LaHood of Illinois.

— “There is no way to get to [net-zero emissions by] 2050 without carbon capture,” said McEachin of Virginia. “But we can walk and chew gum at the same time. That should include not pumping additional carbon into the air at the same time. The difference is in the details, but we are in agreement.”