Home
Stocks
In One Chart: Squeeze play? How the ‘most shorted’ stocks are crushing the market in the new year
Prev Article Next Article
This post was originally published on this site

Sometimes it pays to be hated.

At least that’s the message so far in the new year from the market’s most heavily shorted stocks, which have left their peers behind.

GameStop Corp. GME, -7.44% is the leading example, noted analysts at Bespoke Investment Group. Shares were up more than 100% for the week, even after an 11% pullback on Friday. The surge leaves the stock up around 88% since Dec. 31.

The action appears to be a classic short squeeze.

“For more than a year now, short interest as a percent of equity float has been around or well above 100%. The most recent reading as of the end of 2020 was 144.33%,” the Bespoke analysts wrote about GameStop. “In other words, there have been far more shares sold short than are available to trade.”

To short — or bet that a stock will fall in price — an investor must borrow a share and sell it, hoping to buy it back at a lower price. If instead the price rises sharply, the short seller must buy the shares back to get out of their position. That can lead to a buying frenzy for stocks that have been heavily shorted as investors scramble to exit short positions.

For GameStop shares, it appears the squeeze was triggered Monday, after the videogame retailer said it reached an agreement with activist investor RC Ventures to add three of its members to the board. Also, on Monday, the company said holiday same-store sales rose 4.8% and that digital sales had jumped 309%.

One short selling expert, Ihor Dusaniwsky of S3 Partners, told MarketWatch earlier this week that GameStop’s performance couldn’t be attributed entirely to short covering, arguing that a “long-buying tsunami” was the primary trigger for the rally.

Be that as it may, the outperformance for shorted stocks is a wider phenomenon.

The Bespoke analysts broke it down in a Thursday note, dividing the Russell 3000 RUA, -0.48%, which aims to be a benchmark of the entire U.S. stock market, by deciles from most- to least-shorted, as measured by short interest as a percentage of total float. 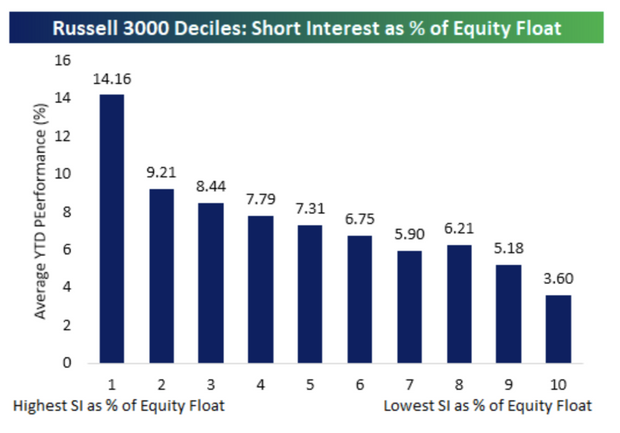 As the chart above shows, the average stock in the most heavily shorted decile was up by more than 14% for the year to date through Thursday, versus a 3.6% rise for the least-shorted equities, which have short interest of less than 1% of float. Even if GameStop is taken out of the mix, the most-shorted decile had risen more than 13%, on average, the analysts found.