Home
Stocks
The Margin: ‘Never had 2 commas in a single position before’ — Investors celebrate huge gains in meme stock GameStop
Prev Article Next Article
This post was originally published on this site

Cramer and Faber were discussing Palantir PLTR, -2.60%, one of Reddit’s favorite stock picks, but the duo could have just as easily been talking about GameStop GME, +57.39%, another meme stock in the popular WallStreetBets community.

The buzz around GameStop reached a fever pitch in Wednesday’s wild trading session, with the stock banging out big gains on what looked to be a massive short squeeze. The surge kicked in on Monday when shares finished up double-digits after the video-game retailer reached an agreement with activist investor RC Ventures to add three of its members to the board. 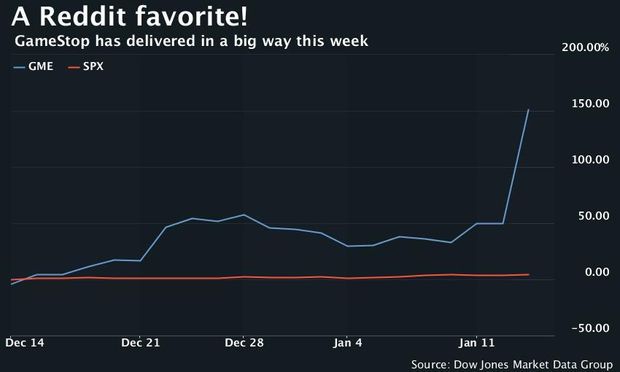 Clearly, Cramer continues to pay attention to the “scissors”:

GameStop closed up 57% on Wednesday and kept moving higher after the bell. The Dow Jones Industrial Average DJIA, -0.03% ended slightly lower while the tech-heavy Nasdaq Composite COMP, +0.43% and S&P 500 SPX, +0.23% both finished in the green.