Home
Stocks
: ‘The debt is like a shadow over you’: These activists pressured Obama to forgive the debt of scammed students — now they have a new demand for Biden
Prev Article Next Article
This post was originally published on this site

During the Obama administration a group of student-loan borrowers and activists successfully pressured the government into providing a pathway for students who were scammed by their schools to have their loans discharged.

Now, with Obama’s vice president set to become president later this month, the group is exerting pressure once again, but this time with a broader target: Mass debt cancellation.

A few dozen mask-wearing protesters gathered outside of President-elect Joe Biden’s campaign headquarters in Philadelphia Monday, calling on him to use his authority once in office to cancel student debt. Amid cheers like “Sleepy Joe, student debt has got to go,” and “Biden owes Philly on day one,” a series of speakers decried the role that student debt has played in their lives and society more broadly.

Kendra Brooks, a member of the Philadelphia City Council and the Working Families Party told the crowd via megaphone that as a young, single mother she took the advice given by so many to go to college.

Brooks went on to tell the crowd that two of her older children have student debt and her family is in the midst of trying to figure out how to protect her 16-year-old daughter from that plight. Brooks added that she hoped the American Dream could be something she could encourage her kids to aspire to, but “we can’t encourage a dream with debt.”

The event comes amid debate swirling around student-debt cancellation. Some of the questions discussed by policymakers and Twitter TWTR, -1.62% users over the past few months: Should the government cancel student debt at all? If so, should everyone have their debt cancelled or should cancellation phase out with income? Should there be a cap on the loan discharge? And who should initiate a policy of mass student debt cancellation? The President? Congress?

Democratic Senators Chuck Schumer and Elizabeth Warren have urged the President-elect to cancel up to $50,000 in student debt immediately. The Biden-Harris transition didn’t immediately respond to a request for comment, but Biden told a Washington Post columnist last month that he was “unlikely” to take that step. The President-elect proposed on the campaign trail to “immediately cancel a minimum of $10,000 of student debt per person,” as a COVID economic relief measure.

The Debt Collective is advocating for mass student-debt cancellation and for Biden to use his executive authority to do it. The organization was founded during Occupy Wall Street as a way for debtors to harness their collective power. Monday’s event served as a kick off for a broader campaign planned for the early days of the Biden administration. 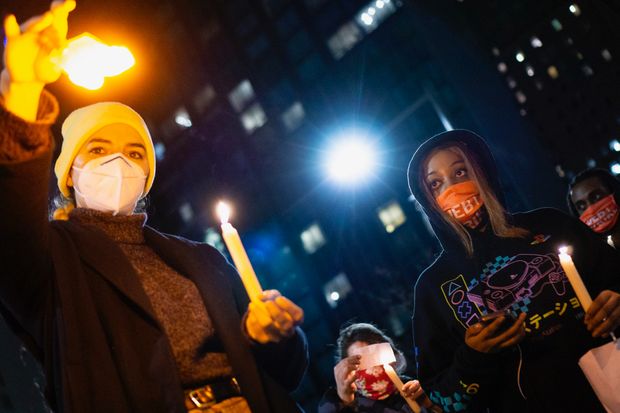 A protester symbolically burns their debt.

The idea behind holding the event at the start of the new year was to “put the pressure on [Biden’s] administration from day one,” to use his executive authority to cancel student debt, Wozniak said. The timing of the action indicates that “even before Biden has been sworn in were going to be on his heels.”

Philadelphia seemed like an ideal location to launch this campaign for a number reasons, said Jalil Mustaffa Bishop, a PA Debt Collective organizer and scholar at the University of Pennsylvania.

For one, the neighborhoods in Philadelphia that struggle the most with student debt and delinquency are communities of color. In the ZIP code that includes majority-white neighborhoods such as Fairmount, Francisville and Spring Garden, the ratio of the median student debt to the median household income is 32%, according to an analysis published last year by the Student Borrower Protection Center, an advocacy group. In the adjacent ZIP code, where 86% of residents aren’t white and includes neighborhoods such as Brewerytown and Strawberry Mansion, that ratio jumps to 104%.

Philadelphia is one of many cities across the country where the weight of student debt is disproportionately felt by borrowers of color and Black borrowers in particular. By hosting the protest in such a city, organizers hope to call attention to that unequal burden, Bishop said.

In addition, the importance of Pennsylvania and the city of Philadelphia to Biden’s win made it an ideal location for the event, Bishop said.

“We’re trying to bring those forces together to show Biden that student debt cancellation is really something that’s owed, particularly to Black borrowers and borrowers of color, who were key to his victory,” Bishop said.

The Debt Collective has been talking about mass student debt cancelation since the days of Occupy Wall Street, but only relatively recently has the idea entered mainstream politics. That’s thanks to a combination of the explosion in student debt since the Great Recession, recognition of its disproportionate impact on Black borrowers, research on the economic impact of student loan cancellation and increasing influence of the progressive movement.

Activism from the Debt Collective was also key to setting in motion one of the first examples of relatively widespread student loan cancellation. Students who have been scammed by their schools have had the right to have the federal loans discharged since the 1990s through a law known as borrower defense. But it wasn’t until the Debt Collective started organizing borrowers to clamor for relief under the law in 2015, that the government cancelled some of that debt en masse.

That experience made policymakers more comfortable with the idea that student debt could be discharged in certain situations. Now, just a few years later, the coronavirus pandemic and its associated economic devastation has added new urgency to the debate over broad based student loan discharge.

Shortly after Biden’s election, student debt cancellation emerged as a candidate for economic stimulus that wouldn’t require Congressional approval, making it attractive to some progressives and mainstream Democrats amid the limitations of a possibly divided congress.

But the idea has drawn controversy with some critics arguing that student debt cancellation would provide a disproportionate benefit to well-off Americans at the expense of more targeted relief. A policy of unlimited student debt cancellation would provide a bigger benefit — at least measured in dollars — to those with the highest debt loads. And because six-figure student loan balances are often often associated with graduate education, which is also often associated with higher incomes, critics worry that discharging student debt could provide a boon to the well-off.

Even among those who support the idea of student debt cancellation, there’s debate about whether the President can and should use his executive authority to do it.

Proponents of mass student loan cancelation, on the other hand, argue that the higher education finance system in its current form essentially amounts to a policy failure and that discharging student debt and providing access to free college would help rectify that failure and improve racial equity.

‘Didn’t come through the traditional channels’

Bishop said he sees the opposition to student debt cancellation as a response in part to the way the idea bubbled up through activism.

One of the latest examples of this “scramble,” according to Bishop, was a recent working paper that argued student-debt cancellation would be more valuable to well-off borrowers because they’re more likely to repay their loans sooner. “They are trying to redefine relief to be something other than what we know it is,” Bishop said.

Many of the “go-to solutions,” for the student-loan problem, including allowing borrowers to pay down their debt as a percentage of their income for decades and then have the remaining balance discharged, “just won’t work,” Bishop said. The Public Service Loan Forgiveness program, which promises to discharge the federal student debt of public servants who have paid down their loans for 10 years has been plagued with errors.

Instead, full debt cancellation is “about reimagining what education can mean,” Bishop said.