Home
Stocks
: It’s no longer illegal to sell a 12-ounce can of wine in the U.S.
Prev Article Next Article 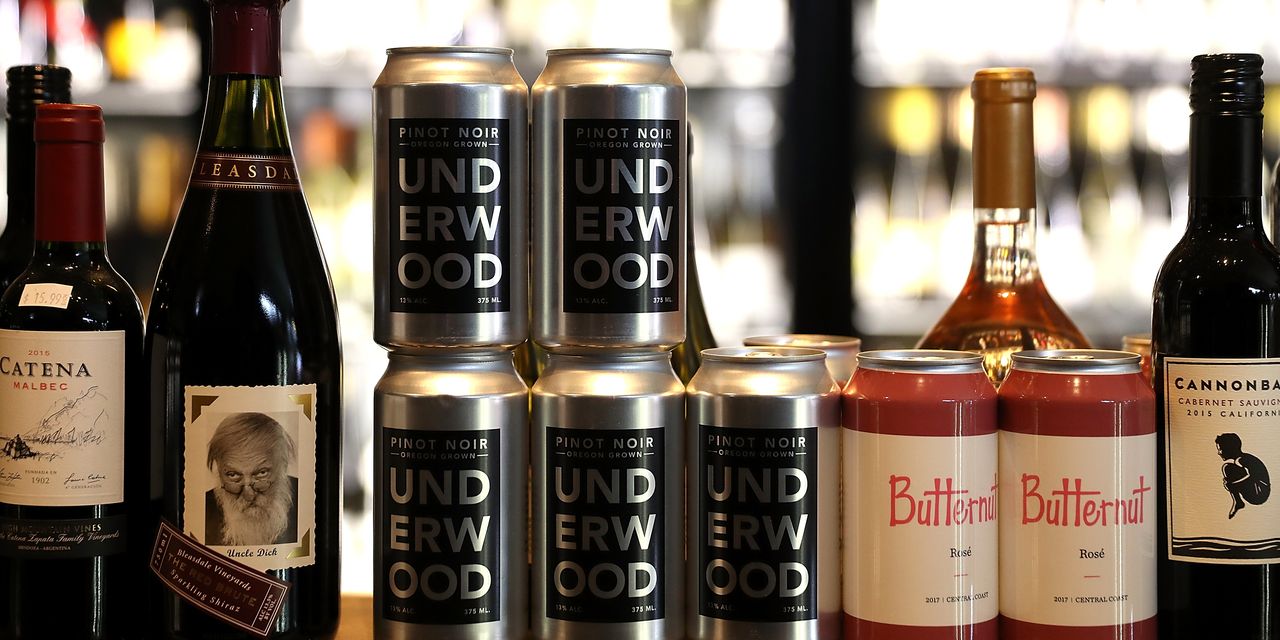 The pandemic is inspiring drinkers to crack open a cold one, and another one, and maybe just one more.

Alcohol consumption has skyrocketed in the past year, and the ways we consume it vary greatly. We’ve drunk out of bottles in front of the TV, out of cans and boxes at socially distanced picnics, and out of travel mugs on walks around the neighborhood.

But did you know that wine and spirits producers have had limited options for packaging their beverages?

Up until last week, the Alcohol and Tobacco Tax and Trade Bureau (TTB) set strict regulations for standards of fill for winemakers. There were just nine options for packaging wine — 50 ml, 100 ml, 187 ml, 375 ml, 500 ml, 1 liter, 1.5 liters, 3 liters and then larger amounts in even liters. And while that might seem like a wide array of options, a few key sizes were missing.

The wine industry has been pushing regulators to allow 250 ml and 355 ml cans for years now, Michael Kaiser, the vice president of government affairs at the National Association of American Wineries, said.

As of Dec. 29, 2020, the TTB added 200 ml, 250 ml and 355 ml as acceptable sizes for wine packaging. The latter is a 12 ounce size that the industry especially wanted. The new standards of fill for wine could be used for bottles in addition to cans, although Kaiser said it’s unlikely winemakers would produce a bottle that small.

See: It’s not just your imagination — wine glasses are bigger than ever

Adding acceptable standard fill options is better than eliminating all standards of fill completely, Kaiser said, because without any federal laws on packaging, it would be left to the states to regulate.

“We really pushed the industry hard to make sure that they didn’t eliminate (all standards of fill) because that would have caused a whole host of problems with interstate commerce,” he said.

A spokesperson from the Distilled Spirits Council of the United States said the council supported retaining the current standards of fill and adding limited additional sizes, rather than eliminating all but maximum and minimum container sizes. The new package sizes for distilled spirits are 700 ml, 720 ml, 900 ml and 1.8 liters.

In a comment filed to the TTB in 2019, the council argued that a limited expansion — rather than eliminating all standards of fill — is best for both the distilled spirits industry and consumers.

The new 250 ml size can for wine is a good single serving — it’s just a little over a standard glass of wine and is comparable to a restaurant pour. In the past, Kaiser said wineries had to settle for 187 ml canned servings but would have to sell them in two- or four-packs in order to be cost effective.

But grocery stores could sell the 187 ml cans individually, which Kaiser said gave the retailers an advantage over the wineries themselves.

The new 355 ml size is particularly important, Kaiser said, because it is the size of a standard 12 ounce can of soda or beer. Although a 355 ml can might not look very different from a 375 ml can on the shelves at the liquor store, they’re much easier to source. That 355 ml size was the most requested standard of fill by wineries, so Kaiser said including it in the new regulations is a win.

Although canned wines have become more popular in recent years, he said it’s still not necessarily a widespread practice.

“There’s a stigma that I think exists with consumers, much like with screwcaps, that it’s lower quality product,” Kaiser said. And he said most wineries aren’t putting their higher end product in cans.

“Not to say that they’re bad quality, but they’re inexpensive products,” he said.

Canning in the wine industry is still a relatively new phenomenon, but the expanded canning options — and the 355 ml addition in particular — might be exactly what some wineries needed to get them to start canning.

“If a winery was on the fence about canning their product, it will allow wineries who maybe didn’t want to start canning to think about getting into it,” he said.

New York Sen. Chuck Schumer released a statement in support of the new regulations last week, saying that the flexibility will allow New York’s wine industry to be a bigger player in the nearly $200 million canned wine market.

“Although it was already a heavy-hitter, New York’s $4.8 billion wine industry was left hanging on the vine by TTB’s outdated rules and restrictions,” Schumer said. “Today’s decision to allow winemakers to sell their products in the most popular-sized cans will lead to further economic growth and allow producers to capitalize on an explosive trend.”

A potential downside, as Kaiser points out, is that if more wineries take advantage of canning as a packaging option, it could further exacerbate the country’s aluminum shortage.

Even still, Kaiser said the new packaging sizes are a good sign for the wine industry.

“A lot of times regulations are not caught up with innovation,” he said, “and this is a case where they are becoming more in line with what the realities of the market are demanding and what producers can do.”