Home
Stocks
Need to Know: A new COVID-19 strain is sending stocks tumbling, but here’s why investors shouldn’t panic, says this analyst
Prev Article Next Article
This post was originally published on this site

A new $900 billion coronavirus stimulus deal has finally been struck — but U.S. stocks are falling.

Fears over a new strain of the coronavirus that causes COVID-19, discovered in the U.K., have spooked investors at the beginning of Christmas week. The U.K.’s health minister Matt Hancock warned that the new strain, said to be highly infectious, was “out of control” as the government scrapped a planned relaxation of the rules over the holiday period. Prime Minister Boris Johnson said the strain could be 70% more transmittable.

A number of European countries, including France, Italy and the Netherlands have suspended all travel to and from the U.K. Italy has also detected a patient with the new strain.

The developments have brought a return to uncertainty, hitting global stocks early on Monday. Despite the COVID-19 aid deal, the Dow Jones Industrial Average DJIA, +0.01% fell 0.9% in early trading, before recovering to trade 0.3% down, while the pan-European Stoxx 600 SXXP, -2.33% was 2.3% lower.

In our call of the day, Markets.com analyst Neil Wilson described the market move as near-term volatility and said “corrections of this nature” are to be expected on the road to full vaccine deployment.

“This is the kind of near-term volatility we can expect until the full force of vaccines is felt. There has been a lot of hope already priced in with the vaccine-inspired November rally so we cannot expect a straight line higher for stocks,” he said in a note on Monday.

He added that the rotation trade was unwinding, at least in the U.K., due to tighter measures and travel restrictions, with oil companies BP BP, -4.90% and Royal Dutch Shell RDSB, -5.67% and British Airways owner IAG IAG, -7.96% among the notable fallers, and online grocer Ocado OCDO, +5.57% and food-delivery company Just Eat Takeaway JET, +1.88% among the few European stocks rising.

With the full impact of the vaccine some months away, Wilson warned investors to be prepared for a rough ride. “The cavalry may be coming but the homesteaders need to batten down the hatches and face another onslaught before they arrive,” he said.

The pound GBPUSD, -1.23% tumbled 1.3% as a result of countries banning travel to the U.K. amid the new virus strain and a lack of progress in the Brexit trade deal talks. Sterling’s weakness mitigated losses for the internationally-exposed FTSE 100 UKX, -1.73%, which declined 1.7% lower. Oil prices CL00, -3.64% BRN00, -3.67% fell sharply on concerns the new strain will hit demand. 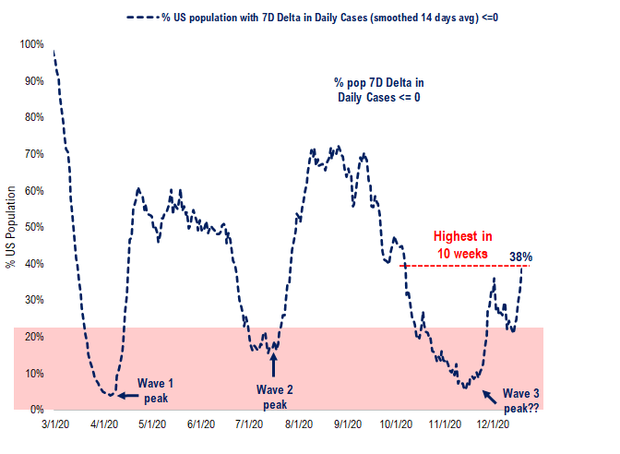 Our chart of the day from Fundstrat shows that the percentage of the U.S. with falling cases is at 38% — the highest level since early October, which its analysts said may suggest the third wave has peaked. But they added that the situation in California was “pretty serious.”

Biotech Moderna MRNA, +0.05% began distributing its COVID-19 vaccine on Sunday, the second vaccine to be authorized in the U.S.

The European Union authorized its first vaccine against COVID-19 on Monday, joining the U.K. and the U.S. in approving the Pfizer PFE, -1.43% and BioNTech BNTX, +1.52% jab.

A suggestive tweet by Tesla Chief Executive Elon Musk has led to a discussion about a potential ‘$1-trillion favor’ for Tesla shareholders.

Anglo-Dutch oil major Royal Dutch Shell RDSB, -5.67% said it expects to book charges of between $3.5 billion and $4.5 billion in the fourth quarter due to write-downs, asset restructuring and onerous contracts. The stock fell 3.7% in early trading.

New York Governor Andrew Cuomo called it “reprehensible” and “grossly negligent” to allow U.K. travelers to fly into JFK Airport without being tested despite a contagious new mutations of coronavirus shutting down London.

Want more for the day ahead: Sign up for The Barron’s Daily, a morning briefing for investors, including exclusive commentary from Barron’s and MarketWatch writers.