Bitcoin’s surge to unprecedented levels above $23,000 on Thursday is being met with much ballyhoo on Wall Street, but at least one technical expert warns that the popular digital currency could be primed for a pullback.

Tom DeMark says that based on his timing models, the world’s most prominent cryptocurrency is likely to retreat soon.

“Although it appears treacherous to take such a stance, here is what our combined timing models are suggesting about Bitcoin at this time,” he said, pointing to what he described as “pending upside trend exhaustion,” which could play out Thursday or Friday, initiating a downside move for the nascent asset.

He said that each warning for bitcoin’s BTCUSD, +0.34% retrenchment was the precise high or low day.

DeMark is a technical analyst who employs market-timing measures to determine when to buy and sell and asset. 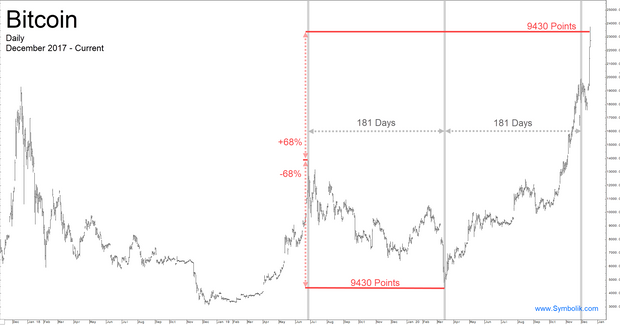 “Obviously, there is no certainty in the forecasting business and often it is prudent to await confirmation of the completion of a trend rather than making a bold prediction,” he said. “Nevertheless awaiting a close less than the close 4 or 5 days earlier and next day downside follow through would sacrifice opportunity.”

DeMark said bitcoin could pullback anywhere between roughly 5.5% and 11% but that the decline could also be steeper. He also acknowledges that the asset could perpetuate its gains and ignore the exhaustion signal, if investors continue to pile into the asset.