Home
Stocks
The Conversation: Here’s proof that tax cuts for the rich don’t boost the economy
Prev Article Next Article
This post was originally published on this site

Governments shouldn’t be worried that raising taxes on the rich will harm their economies when deciding on how to pay for COVID-19. Our new research on 18 advanced economies shows that major tax cuts for the rich over the past 50 years have pushed up inequality but have had no significant effects on economic growth or unemployment.

These findings shed new light on a debate that has long divided policymakers, with one side claiming higher taxes on the rich could raise revenue and reduce inequality, and the other arguing that low taxes on the rich are the best route to wider economic prosperity.

As the COVID-19 pandemic is putting government finances under pressure worldwide, higher taxes on the rich are back on the political agenda. In the U.S., the president-elect, Joe Biden, has promised to raise taxes on top income earners and corporations. Voices demanding a wealth tax have also become louder in the U.K. and Germany. Given the damage the pandemic has done to economies, the notion of getting the most affluent to help foot the bill is one that has many supporters. But once again this is being countered by those who insist that low taxes are crucial for stimulating the economy.

Such arguments about the efficiency advantages of low taxes on the rich have been powerful drivers of previous tax cuts. The graph below shows a new comprehensive indicator that measures taxes on the rich across countries and over time by combining the most important taxes on the rich including taxes on top incomes, capital and inheritances.

Since the 1980s, many countries have legislated major tax cuts for the rich. For instance, the two Reagan tax cuts in the U.S. reduced top rate taxes substantially in 1982 and 1987. In the U.K., taxes on the rich dropped significantly under the Thatcher administration, with major tax cuts in 1979 and 1988. 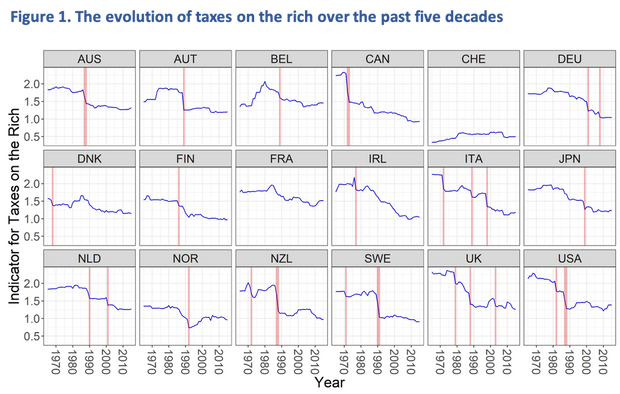 Falling taxes on the rich have coincided with a period of rising inequality, especially at the top of the income distribution as the graph below shows. This trend has been most severe in the Anglo-Saxon countries. The U.S. really stands out, with over one-fifth of pre-tax national income now going to the richest 1% of individuals. 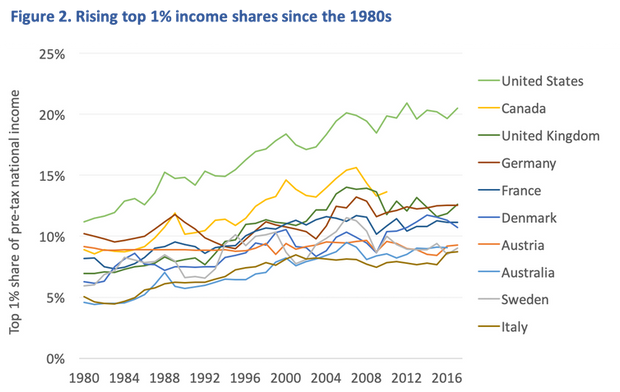 Few economic benefits of low taxes on the rich

Our research compared countries that passed laws for major tax cuts in a given year with those that didn’t. For example, we looked at economic outcomes in Australia following the 1987 tax reform and the U.S. following the 1982 tax cuts and compare them to economic outcomes in countries that did not cut taxes on the rich at the same time. The results are in the graph below.

We repeated such comparisons for each major tax cut for the rich in 18 Organisation for Economic Co-operation and Development (OECD) member countries from 1965 to 2015. 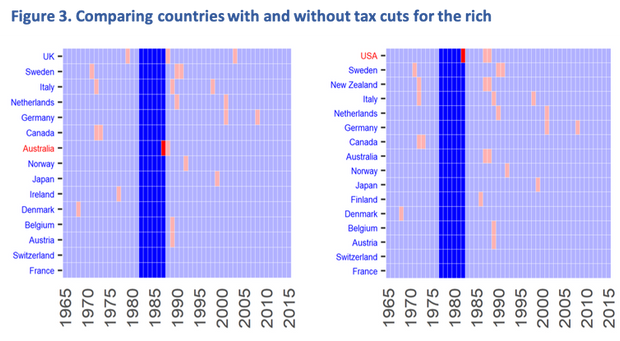 Our results show that countries that implemented major tax cuts saw the richest 1% increase their income share in the following years. Five years after reform, the effect was a more than 0.8 percentage points increase in the top 1% income share (see the graph below). As a comparison, in the U.S., the poorest 10% of income earners have a total income share of 1.8%.

In contrast, we did not find any significant effect of tax cuts on economic growth and unemployment. Gross domestic product per capita and unemployment rates are nearly identical after five years in countries that cut taxes on the rich and in those that did not.

Note: Dark blue line shows the effect of major tax cut for the rich over time. 95% confidence area is shaded in light blue.

The rich could pay the coronavirus bill

Many analysts and policymakers believe that taxes will need to rise in the coming years to ensure the sustainability of public finances. Higher taxes on the rich could help to fund the substantial and potentially long-lasting expansion of government spending and social protection seen during the pandemic. They could also help address health and economic inequalities, which have only been exacerbated by COVID-19 and its economic fallout.

Such tax rises after crises are not unprecedented. Historically, the main drivers of taxes on the rich were wars and economic catastrophes. The COVID-19 crisis might have a similar effect.

Our recent research shows that the economic case for low taxes on the rich is weak. Major tax cuts for the rich since the 1980s have worsened income inequality without boosting economic performance. This might be welcome news for supporters of higher taxes on the rich in the wake of the pandemic.

Also read: Here’s the case for Elon Musk, Warren Buffett and the rest of America’s billionaires sending $3,000 stimulus checks to everybody

Plus: MacKenzie Scott, ex-wife of Jeff Bezos, gave away $4 billion in four months and wants you to follow her lead