Home
Stocks
In One Chart: Tesla bear puzzles over the ‘Quadruple-WTF Chart of the Year’
Prev Article Next Article
This post was originally published on this site

Tesla’s stock is all set to begin trading as a component of the S&P 500 index SPX, -0.13% on Dec. 21, replacing Apartment Investment and Management AIV, -0.49%,  in a what one Wall Street analyst calls “the mother of all” market rebalancing events.

Meanwhile, Tesla TSLA, -2.72% is more like the mother of all bubbles, according to the long-suffering short-sellers, and at least one notable financial blogger, who just can’t seem to wrap their heads around the electric-car maker’s relentless rally.

Wolf Richter of the Wolf Street blog has been chronicling Tesla’s incredible year with a series of charts, beginning with the “WTF Chart of the Year” back in February, when he hailed the stock as a “supernatural phenomenon.” It’s only gotten more phenomenal since then.

Which brings us to Richter’s fourth iteration of the visual: 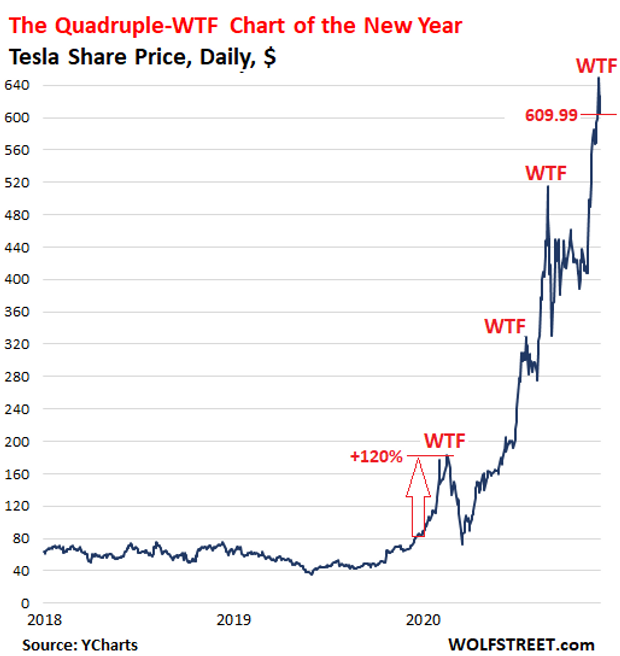 And for a little perspective on what it means for the company’s valuation: 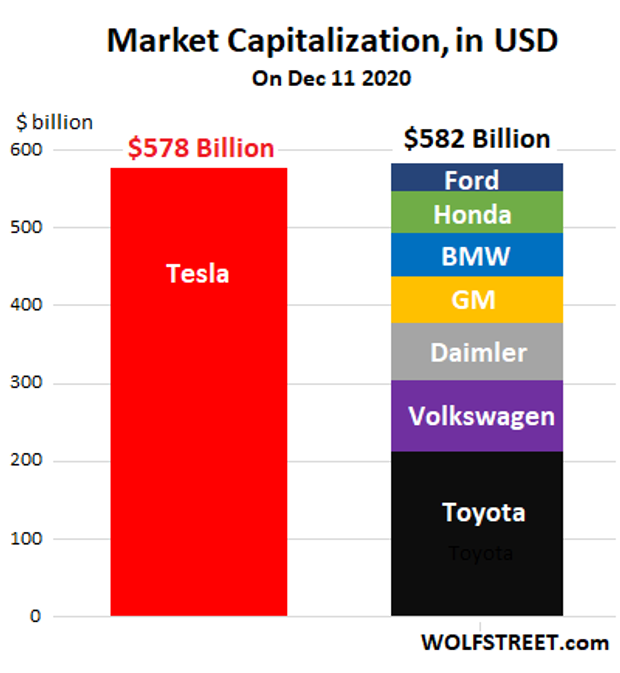 Richter, like so many skeptics, is left to grapple with Tesla’s more-than-600% rally this year.

“With earnings per share of $0.50 over the past four quarters, Tesla has a PE ratio — if we’re still allowed to look at anything as antediluvian as a PE ratio — of 1,220 times earnings, when 10 to 20 is more typical for profitable automakers,” he wrote.

Richter said that adding such a heavyweight to the index would mean that the stock would comprise more than 1% of the broad market gauge.

“This massive market cap is turning the otherwise fairly routine event of rejiggering the S&P 500 index into a global spectacle,” he said. “And Tesla has taken advantage of this situation: It has extracted $12.3 billion in new funds from investors via three stock sales this year.”

Now, Tesla is swimming in investor cash, leaving Richter to sarcastically offer up some advice on direction Elon Musk should take his company.

“At this rate, Tesla would be far better off just giving up on the sordid cash-consuming business of making cars and building factories  and dealing with warranty issues and regulators and recalls and investigations into faulty suspensions and Autopilot fatalities and whatnot, and just focus on what it does best and pulls off flawlessly each time: Selling shares at hugely inflated prices,” Richter wrote.