Home
Stocks
: Would you like some nuts with that? EasyJet launches home-delivery trolley service with Deliveroo
Prev Article Next Article
This post was originally published on this site 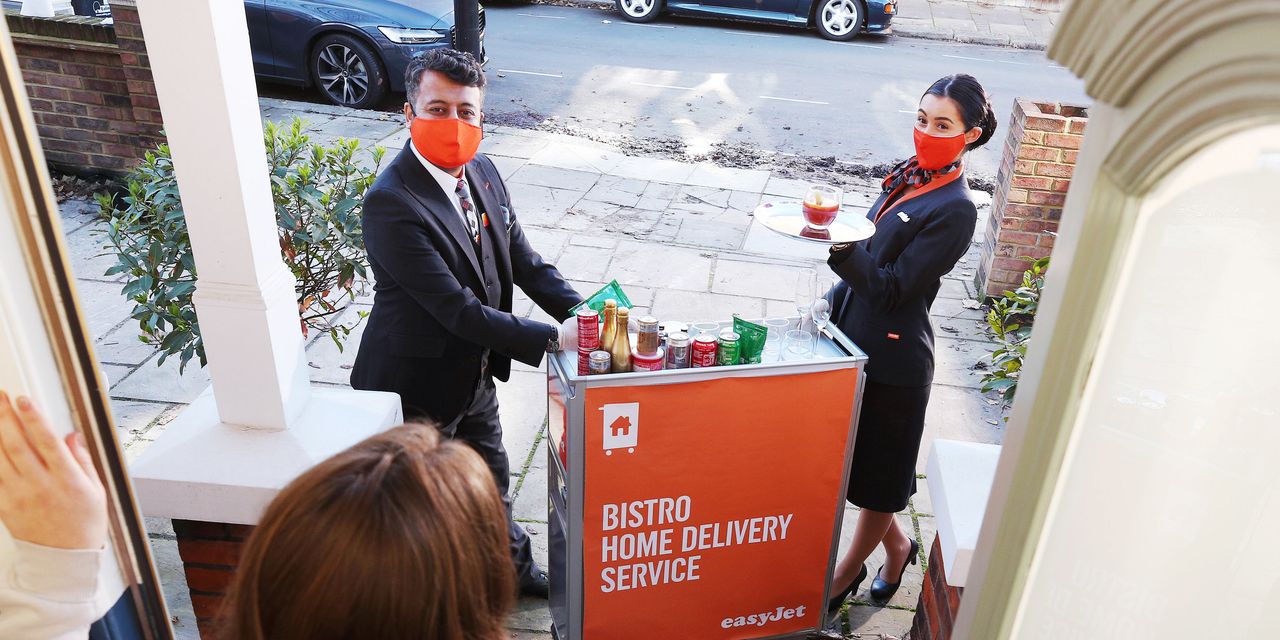 Easyjet EZJ, -2.68% has launched a home-delivery trolley service that will see the airline’s uniformed cabin crew wheel an in-flight trolley right up to customers’ doorsteps.

Members of the public will be able to book a slot online to be served their favorite airline drinks and snacks, with gin and tonic, chilled Prosecco, nuts, and olives all available on the menu.

The two-day trial, which is being run in partnership with food-delivery app Deliveroo, will take place on Dec. 17 and Dec. 18. The service is complimentary, but customers will be asked to make a donation to Age U.K., the charity for older people.

Easyjet ESYJY, -3.60% said the trolley service was a “fun way to keep the cabin crew ‘match-fit,’” ahead of flights getting back to normal next year.

EasyJet plunged to a £1.27 billion loss in the 12 months to the end of September, highlighting the extent of the impact of the COVID-19 pandemic on the low-cost carrier. Shares in easyJet, which have fallen more than 40% in the year to date, were down 2.16% in early morning London trading on Thursday.

Airlines worldwide have come up with myriad initiatives, including “flights to nowhere” and selling their corporate art collections, amid an unprecedented slump in demand for air travel.

On Wednesday, industry body the International Air Transport Association said that the recovery of international passenger demand continued to be disappointingly slow in October, down 87.8% compared with the same month in 2019. Capacity was 76.9% below previous year levels, and load factor shrank 38.3 percentage points to 42.9%.

“While the pace of recovery is faster in some regions than others, the overall picture for international travel is grim. This uneven recovery is more pronounced in domestic markets, with China’s domestic market having nearly recovered, while most others remain deeply depressed,” said de Juniac.

Read: Tycoons and sports stars to be exempt from quarantine in controversial English travel rule

Last month, International Consolidated Airlines IAG, -1.16% -owned British Airways launched a sale of onboard items, including slippers, crockery, tableware, and trolleys from retired B747 aircraft, in an attempt to raise cash.

Read: Why Qantas Airways is selling this yellow cashmere sweater

In October, Australia’s Qantas Airways QAN, -3.73%  launched a limited-edition line of athleisure-wear, collection, designed by leading Australian fashion designer Martin Grant, which included cashmere sweaters priced at A$425 ($305), hoodies costing A$275 ($197) and beach totes for A$350 ($251).

Days earlier, Singapore Airlines C6L, -0.68%  launched a waiting list for onboard meals on two of its grounded Airbus A380 double-decker jumbo jets, after tickets sold out within 30 minutes of bookings.