Home
Stocks
: Stocks are celebrating the vaccine, but economists are being wallflowers
Prev Article Next Article
This post was originally published on this site

Stock markets certainly have reacted to the good news on the rollout of a COVID-19 vaccine.

But that’s not the case for economic expectations.

Philip Lawlor, head of global investment research for FTSE Russell, points out that global economic forecasts for next year haven’t changed very much. “It is highly unlikely that these forecasts are reflecting the scope of this pent up demand that could ratchet growth expectations being fed into 2021 forecasts, so I think they are yet to reflect the full vaccine impact,” he said in a presentation.

In a note to clients, Jan Hatzius of Goldman Sachs made a similar point. The bank’s global economic growth forecast for 2021 is a full percentage point ahead of the consensus, at 6.2%, and its 2022 forecast of 4.5% growth is above consensus by a half-point. That disparity is similar for its U.S. estimate as well. 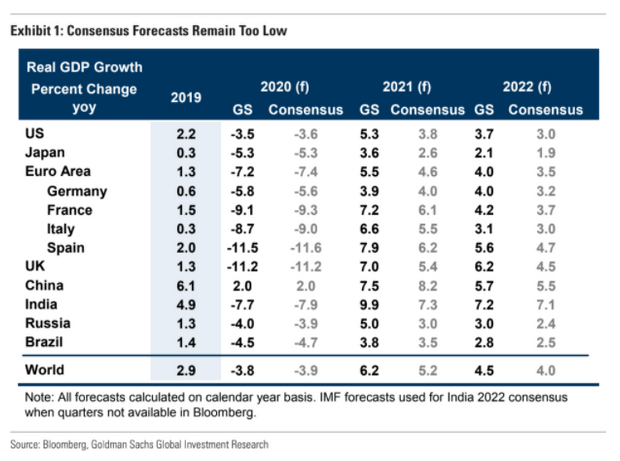 “Some sectors that largely shut down in the spring lockdowns—e.g. auto manufacturing—have learned to keep producing even in a virus-ridden environment. Other sectors that remain depressed for now—e.g. travel and entertainment—are likely to rebound sharply once enough people are vaccinated. This is likely to trigger renewed upgrades in consensus growth forecasts.”

In a presentation to the Wall Street Journal’s CEO Council Summit on Tuesday, IMF Chief Economist Gita Gopinath said there will be two quarters of weak growth before the upside scenario for the global economy becomes evident.

“The fourth quarter of this year will come in weaker than some people expected and so will the first quarter of next year,” Gopinath said.

“Overall, the world economy is recovering,” she said. The risks between downside and upside scenarios will be “balanced” for the next few quarters, because of the positive news on the vaccine front.

“After that, I think we can have some significant upside risks,” she added.

Lawlor said an important point of the vaccines is not simply that economic growth expectations rise, but also that the tail risks recede. “I think the bottom line is that rising bond yields reflect rising growth expectations. And if that was the case, that would not constitute a significant headwind for equities,” he said.

Lawlor said that could generate a fear-of-missing-out rotation trade next year. A pick-up in bond yields should encourage a rotation from quality growth stocks to the COVID-impacted value stocks and financials.

The global economy mirrors the U.S. economy in one key respect -a divergence in the economic prospects between skilled and unskilled workers, the IMF chief economist said.

Advanced economies are recovering more quickly than projected while many developing countries that rely on tourism and commodities have been hit much harder. Vaccines are going to be distributed more slowly in many emerging and developing economies than in advanced economies.