Home
Stocks
Need to Know: The market started to unwind the reflation trade. Watch this signal to see if the rally can continue, strategist says
Prev Article Next Article
This post was originally published on this site

Thomas Lee, the head of research at Fundstrat Global Advisers, isn’t giving up on the rally. Even with a surge in COVID-19 cases in the U.S. and new restrictions popping up, there are three financial market barometers that are suggesting that the trend toward risky assets remains in place. The dollar DXY, +0.12% is weaker, credit (particularly high-yield HYG, -0.05% ) is rallying, and the VIX volatility index VIX, +3.47% is “behaving,” he says

The dollar, says Lee, is what’s key. There could have been four factors to boost the dollar — the surge in COVID-19 cases, weak economic data, presidential transition risk, and vaccine supply issues. “So these things, if raising risk of an economic relapse, should be causing USD strength. Instead, we see a steady decline in USD,” Lee says. 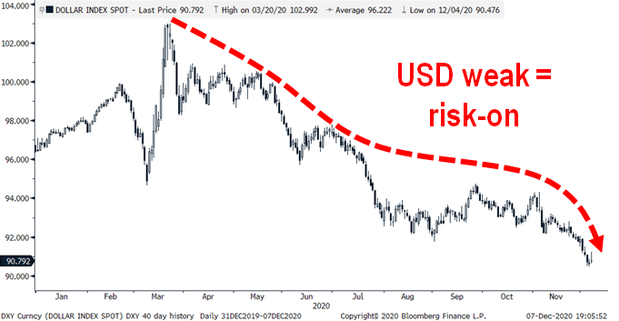 As long as the dollar is weakening — and Lee says a technical analysis shows it should be declining for the next three to four years — there is further equity upside. “This is not that different from the USD story in 2017 through mid-2018, or 18 months. During that time, S&P 500 posted a strong 2017 and was strong into 3Q18 (up ~8%),” he says. “But once USD started to strengthen (along with Fed tightening) = 4Q2018 was a train wreck.”

As the first person outside of clinical trials gets vaccinated in the U.K., the White House denied a report in the New York Times that it turned down an opportunity from drugmaker Pfizer PFE, +2.26% to buy 100 million doses, potentially delaying a rollout — of that particular vaccine at least — until June. The White House will have a “vaccine summit” on Tuesday, in which Pfizer and biotech Moderna MRNA, +4.59% won’t participate.

Sen. Chuck Schumer, the minority leader, said he hoped Sen. Majority Leader Mitch McConnell “can catch up with the more fair-minded members of his caucus” and engage in bipartisan talks on a stimulus bill, as McConnell said he will take up a one-week spending bill to make sure the government doesn’t close on Dec. 11.

Japan is preparing another 40 trillion yen ($384 billion) fiscal stimulus, according to its prime minister.

Ahead of his trip to Brussels, U.K. Prime Minister Boris Johnson labeled trade negotiations with the European Union as “very tricky.” The two sides agree the remaining disputes are over a level playing field, governance, and fisheries.

Popular electric-vehicle maker Tesla TSLA, +7.13% filed to sell up to $5 billion in shares.

Luxury-home builder Toll Brothers TOL, +2.73% reported fiscal fourth-quarter earnings and revenue well ahead of estimates as orders jumped 68%. Chief Executive Doug Yearley said it is the strongest housing market he has seen in his 30 years at the company.

Goldman Sachs GS, -0.47% is pursuing 100% control of its Chinese securities venture, as a separate report said it may move its asset-management arm to South Florida.

Famed value investor Jeremy Grantham has made about $200 million — from a very unvalue-like $12.5 million investment in QuantumScape, a battery maker that merged with a special-purpose acquisition company, Kensington Capital Partners. 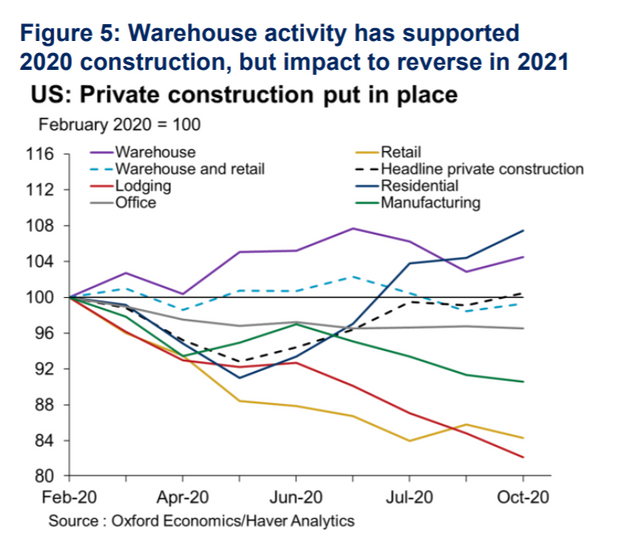 One economic benefit from the COVID-19 pandemic has been to drive construction activity for warehouses that are needed to support the drive to online retailing. But that boost is expected to fade next year, according to Stephen Foreman, an economist at Oxford Economics. And even with vaccines, demand for office use will be subdued, as preferences toward remote working may continue. Put the two together and construction activity may decelerate, he said.

Chuck Yeager, the test pilot who broke the sound barrier and who Tom Wolfe famously said personified “the right stuff,” has died at age 97.

President Donald Trump was persuaded by aliens not to reveal their existence, according to the 87-year-old former head of Israel’s space security program.