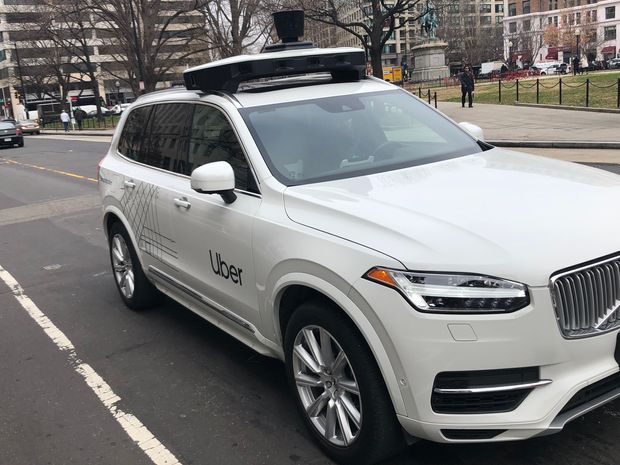 An Uber car equipped with cameras and sensors drives the streets of Washington, D.C., on Jan. 24. Uber is selling its self-driving division to Aurora Innovation.

Uber Technologies Inc. is selling its self-driving division to startup Aurora Innovation, the companies announced Monday, though it doesn’t mean the ride-hailing giant will be exiting the autonomous vehicle industry — nor that Aurora is paying for the technology Uber has spent billions of dollars to develop.

Instead, Uber UBER, -1.93% will invest $400 million into Aurora as part of the deal and will retain a 26% stake in the startup, according to a filing with the Securities and Exchange Commission. The two companies will also “collaborate with respect to the launch and commercialization of self-driving vehicles” on Uber’s network, the filing said. Uber Chief Executive Dara Khosrowshahi will join Aurora’s board of directors.

In the deal, Uber will unload its self-driving division, which has been beset with setbacks and controversy that includes one of its test vehicles killing a pedestrian in Tempe, Ariz., in 2018, in the first known fatality from a self-driving car. Uber suspended self-driving testing afterward, and though the company eventually resumed testing, with the pandemic negatively affecting its ride-hailing business and the company feeling investor pressure to turn a profit, Uber acted.

“It was a money-loser and the Street is focused on no more red ink for Uber,” said Dan Ives, analyst for Wedbush Securities. “It was a no-brainer move.”

The move turns the page on an expensive chapter in Uber’s self-driving ambitions. In 2019, the company spent $960 million on research and development expenses for its Advanced Technologies Group and other technology initiatives, it said in its annual report. In 2017, 2018 and 2019, the ATG and other technology programs unit’s losses equaled $1.579 billion.

In a blog post Monday, Aurora Chief Executive Chris Urmson said Uber’s Advanced Technologies Group will join “the Aurora family,” adding that its “foundational work and combined expertise gives Aurora an unprecedented opportunity to lead the industry in both trucking and passenger mobility.”

Khosrowshahi said in a statement that “in joining forces with Aurora, [ATG is] now in pole position to deliver” on the promise of self-driving vehicles even faster.

It is unclear whether the deal will result in job cuts. An Uber spokeswoman said “Aurora has committed to making offers to the majority of ATG employees, though no decisions regarding individuals or teams are being communicated at this time.”

Aurora is a Palo Alto, Calif.-based startup co-founded in 2017 by Urmson, one of the original leaders of Google’s self-driving car unit that later spun off into Waymo. It has raised $690 million, according to Crunchbase, backed by investors including companies such as Amazon Inc. AMZN, -0.14% and Hyundai Motor 005380, -3.36%, and venture capital firms Greylock Partners and Sequoia Capital.

Another of Waymo’s leaders was Anthony Levandowski, whose hiring by Uber led to a trade-secrets lawsuit that cost the ride-hailing company $245 million to settle and, more significantly, autonomous-vehicle development time. Under the settlement reached in 2018, Uber also had to promise not to use Waymo technology in its self-driving cars. In August, Levandowski was sentenced to 18 months in prison for trade-secrets theft.

Also Monday, Uber announced that it is selling $1 billion worth of convertible senior notes to raise cash. The company said it intends to use the proceeds for working capital and other general corporate purposes.

Uber shares declined about 0.5% in after-hours trading Monday after the announcement.