Home
Stocks
Market Snapshot: Dow futures rise over 300 points as stocks look to build on historic November rally
Prev Article Next Article
This post was originally published on this site 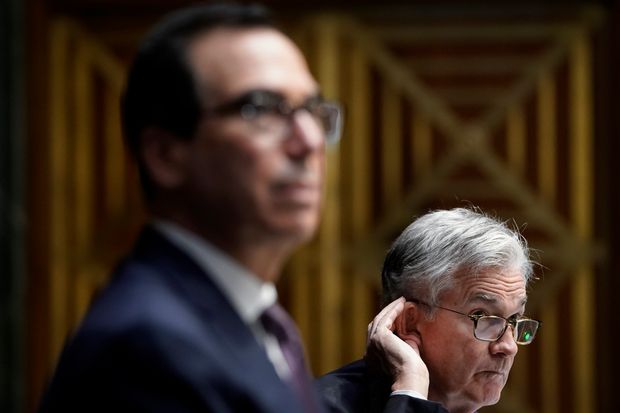 Treasury Secretary Steven Mnuchin and Federal Reserve Board Chairman Jerome Powell at a September hearing. The two officials are scheduled to testify before a congressional panel Tuesday morning.

U.S. stock-index futures rose sharply Tuesday, with equities aiming to build on a historic November rally that was fueled partly by optimism over progress toward a COVID-19 vaccine.

What are major benchmarks doing?

November gains for equities were tied in large part to optimism over progress toward a COVID-19 vaccine, with three candidates showing promise in late-stage trials. With pharmaceutical manufacturers seeking emergency approval from governments in the U.S and Europe, prospects for widespread distribution by early next year stoked expectations for a broader economic recovery.

As a result investors are looking past a sharp rise in COVID-19 cases in the U.S. and Europe. Some analysts contend the rally is likely to be challenged in coming weeks as worries mount over the economic toll from rising cases amid a lack of additional aid spending out of Washington.

Investors, meanwhile, were likely to pay close attention to congressional testimony Tuesday morning by Federal Reserve Chairman Jerome Powell and U.S.Treasury Secretary Steven Mnuchin. In testimony prepared for delivery at the hearing, Powell said the Fed’s unprecedented steps to stabilize financial markets this year had largely succeeded in restoring the flow of credit from private lenders.

The joint appearance comes after Mnuchin last month unexpectedly told the Fed he wouldn’t extend five lending programs served as a backstop to municipal and corporate debt markets and to purchase loans made to small businesses and nonprofits when they expire on Dec. 31.

“It will be interesting to see what the two officials have to say on the matter, and whether Powell will hint at other ways in stimulating the U.S. economy from a monetary policy front,” said Charalambos Pissouros, senior market analyst at JFD Group, in a note.

The lack of progress toward a new package of spending by Congress could make it more likely the Fed will take additional action in December, Pissouros said. If Powell adds fuel to that view, equities would likely drift north, he said.

It’s also an important day for U.S. economic data. The Markit manufacturing purchasing managers index for November is due at 9:45 a.m. Eastern and the Institute for Supply Management’s November manufacturing index at 10 a.m.

Economists surveyed by MarketWatch expect the ISM gauge to slip to 58% from an October reading of 59.3%. A reading of more than 50% signals an expansion in activity.

Data on October construction spending is also slated for 10 a.m. Economists look for a 1% rise.

Investors will also hear from Fed Gov. Lael Brainard and San Francisco Fed President Mary Daly over the course of the day.