Home
Stocks
Key Words: Dr. Fauci on Cuomo’s decision to review vaccines for New Yorkers: ‘Trust the process because it is a sound process’
Prev Article Next Article

Dr. Anthony Fauci has some advice for New York Gov. Andrew Cuomo, and the four other states that have vowed to independently review the efficacy and safety of a vaccine before making it available to their states. “Trust the process because it is a sound process,” he said.

Fauci, the director of the National Institute of Allergy and Infectious Diseases, told the Washington Post in a video interview Monday. “I myself will get vaccinated and I will recommend that my family gets vaccinated.” Nevada, Oregon and Washington and California will also hold their own reviews.

The veteran immunologist said a COVID-19 vaccine that makes it to market will be “independently” and “transparently” reviewed by a team of experts, himself included, and urged people to take it. “If we want to protect the individual and all of society, we should take the vaccine,” Fauci said.

Even if a vaccine receives approval from the Food and Drug Administration, Gov. Gavin Newsom, a Democrat, took a similar stance, telling a news conference last month, “We don’t take anyone’s word for it. We will do our own, independently reviewed process with our world-class experts.”

Fauci said that was an unnecessary approach. “I can understand, but I don’t agree with their doing that,” he said. “They have heard mixed messages from Washington. I don’t fault them.” However, the doctor urged those five states not to delay a vaccine by repeating the work of the FDA.

During the first surge of the pandemic, President Donald Trump and Cuomo sparred over the supply of personal-protective equipment and the availability of ventilators for coronavirus patients. For his part, the president appeared to retaliate against Cuomo’s vaccine-review stance.

“These are coming from the greatest companies anywhere in the world, greatest labs in the world,” Trump said. “But he doesn’t trust the fact that it’s this White House, this administration, so we won’t be delivering it to New York until we have authorization to do so, and that pains me to say that.” 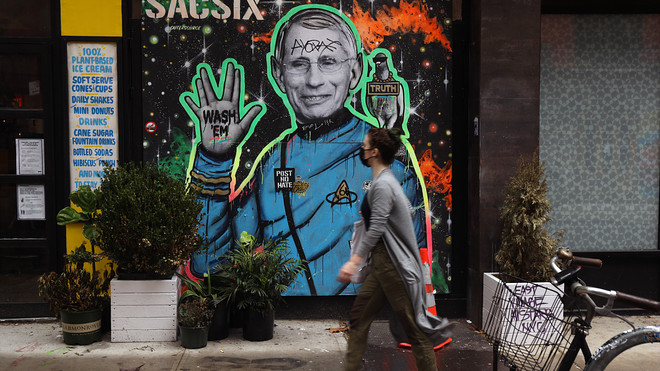 A mural of Dr. Anthony Fauci by the artist SacSix in the East Village of New York City. Fauci, who grew up in Brooklyn, said he disagrees with New York and decisions by four other states to independently review a vaccine that makes it to market.

On Monday, AstraZeneca AZN, -1.08%  and the University of Oxford said their coronavirus vaccine is up to 90% effective when administered as a half dose, and then a full dose one month later. Effectiveness falls to 62% when two full doses are given one month apart.

The Dow Jones Industrial Average DJIA, +1.12%, the S&P 500 Index SPX, +0.56%  and the Nasdaq Composite Index COMP, +0.21%  were up slightly Monday on the back of the AstraZeneca–Oxford vaccine news, but investors remain worried about the recent surge in cases.

As of Tuesday, 59 million people worldwide had contracted COVID-19, with almost 1.4 million deaths, with 12.4 million cases in the U.S. and 257,560 fatalities, according to data aggregated by Johns Hopkins University. Reported cases do not, for the most part, include asymptomatic cases.

The U.S. daily tally of coronavirus infections hit 142,732 on Sunday, down from 200,000 on Friday, a daily record. Hospitals in the Midwest and southern states including Texas and Florida continued to feel the strain. Hospitalizations are at their highest level since the pandemic began.

During his Washington Post interview, Fauci also reiterated his warning to Americans about Thanksgiving, and urged people to stay home and not travel to see relatives who may be vulnerable. Nearing 200,000 new cases a day and 1 million new cases over 6 days is concerning, he said.

However, he said that the American people have the power to change that trajectory. “The numbers can be stark, sobering and, in many cases, they can be frightening,” the doctor said. “I don’t want this to be a Doomsday statement. But you don’t have to accept these numbers as inevitable.”

Gatherings such as Thanksgiving, Fauci said, lead to transmission. “If you have people in your home that are not members of the immediate household, and you’re not really sure of their level of exposure, you should wear a mask indoors with the obvious exception of eating and drinking.”

“Better to be careful now,” he added, “and look forward to many more in the future.”