Home
Stocks
Earnings Outlook: Nvidia’s big change is about to flip back around
Prev Article Next Article
This post was originally published on this site 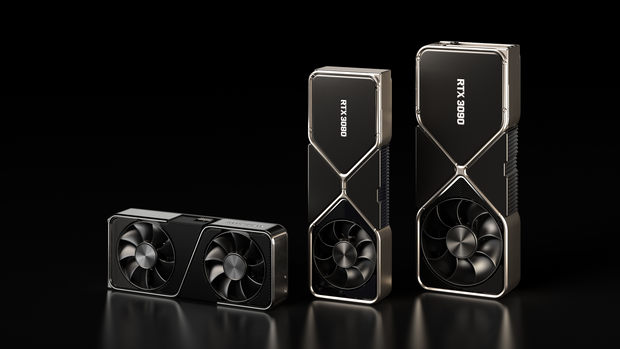 After Nvidia Corp.’s data-center sales topped gaming sales for the first time over the summer, that dynamic is expected to revert thanks to new chips and the pandemic-influenced boom in gaming.

Nvidia NVDA, +0.83% is scheduled to report its third-quarter earnings on Wednesday after the close of markets. The last time Nvidia reported earnings, it reported that data-center sales surpassed gaming sales for the first time in the company’s history, but that may not last with the introduction of new gaming cards.

Chief Executive Jensen Huang said in August that he thinks “this may very well be one of the best gaming seasons ever,” and analysts seem to agree. Analysts surveyed by FactSet expect data-center sales of $1.83 billion, compared with gaming sales of $2.02 billion.

From August: Nvidia hits a sweet spot, with both gaming and data center on the rise

“We expect Nvidia to meet our data center segment estimates, while potentially posting solid gaming segment upside on the ramp of the GeForce RTX 3000-series product cycle,” Wells Fargo analyst Aaron Rakers said. He has an outperform rating and a $605 price target, with a cautious near-term stance on data-center sales.

In the third quarter, the company launched its next-generation GeForce RTX 3000-series of gaming chipsets based on its Ampere architecture, which debuted in May to replace its Turing and Volta chips with a single platform.

The quarter also saw Nvidia’s ambitions into being a true semiconductor powerhouse as it seeks to break into mobile device chips. In September, Japanese conglomerate SoftBank Group Corp. 9984, +1.83% SFTBY, +1.63% reached a deal with Nvidia to sell its chip design business Arm Holdings to Nvidia for $40 billion.

Read: Nvidia’s deal for Arm could mean a real challenge to Intel and AMD, but is likely to face opposition

Earnings: Of the 34 analysts surveyed by FactSet, Nvidia on average is expected to post adjusted earnings of $2.58 a share, up from the $2.19 a share expected at the beginning of the quarter and the $1.78 a share reported a year ago.

Revenue: Wall Street expects revenue of $4.41 billion from Nvidia, according to 33 analysts polled by FactSet. That’s up from the $3.97 billion forecast at the beginning of the quarter, and the $3.01 billion Nvidia reported in the year-ago quarter. Estimize, a software platform that uses crowdsourcing from hedge-fund executives, brokerages, buy-side analysts and others, calls for revenue of $4.45 billion. Nvidia had forecast record revenue of $4.31 billion to $4.49 billion.

On Monday, Susquehanna Financial analyst Christopher Rolland, who has a positive rating on Nvidia, hiked his price target on the stock to $610 from $560, saying the company’s third quarter “sets up well” even as the RTX-3000-series rollout hit some snags because of manufacturing supply constraints. Rolland expects Ampere supply to improve in the fourth quarter, adding that he’s “constructive” on sales to Nintendo Co. 7974, -1.90% for its Switch console and to data-center customers.

“In summary, we acknowledge the possibility of shortages for Ampere in C3Q20, but encourage investors to look past the near-term supply disruption and toward the long-term, multi-dimensional growth story that should continue to play out into C4Q, early 2021, and beyond,” Rolland said.

Citi Research analyst Atif Malik, who has a buy rating and a $540 price target, said he expects “modest upside” to the Street’s revenue consensus given suggestions that PC gaming revenue is up “midteens,” sales to Nintendo are “up sharply” and data-center growth is in line.

Oppenheimer analyst Rick Schafer, who has an outperform rating and a $600 target, held similar views.