Home
Stocks
The Wall Street Journal: As Trump vows to fight on, some advisers concede they see no path to victory
Prev Article Next Article
This post was originally published on this site 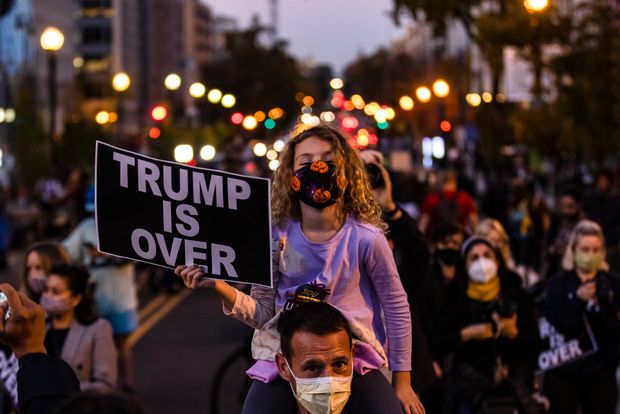 A 7-year-old girl holds a sign as she sits on her father’s shoulders during a demonstration at the Black Lives Matter Plaza in front of the White House on Friday.

WASHINGTON — President Trump said Friday he would continue to fight election results that showed him on the cusp of losing to former Vice President Joe Biden. Privately, people familiar with the conversations say, advisers are urging him to prepare for that eventuality.

Trump’s campaign on Friday named David Bossie, one of the president’s closest political confidants, to head up its legal team. The addition of Bossie, who is not a lawyer, comes three days after polls closed and after some lawsuits challenging results had been dismissed while others remained active.

Some advisers have privately said they see little path forward, politically or legally, that would prevent Trump from becoming the first president to lose re-election since 1992.

“ One adviser, asked if he expected the president to concede the race, replied via text message: ‘Lol.’ ”

Among the president’s advisers, finger-pointing over the campaign’s legal strategy has intensified in recent days, White House and campaign aides said. Aides have expressed acute frustration over what many see as a slapdash legal effort, complaining that — even though Trump spent months telegraphing his intent to fight the election outcome in the courts — there wasn’t enough planning ahead of Election Day and has been little follow-through on decisions made this week. For days after the election, advisers said they didn’t know who was in charge of the strategy.