Home
Stocks
In One Chart: Market volatility: Here’s what a contested election would mean for stocks, bonds and the dollar
Prev Article Next Article
This post was originally published on this site

A messy election outcome would almost certainly send stocks, the dollar and Treasury yields south, but market volatility could be more unpredictable if the 2000 Florida debacle is a guide, according to one analyst.

Stocks, the dollar and yields (which fall when prices for safe-haven Treasurys rise) declined over the course of the legal battle over Florida’s recount efforts, recalled Alan Ruskin, macro strategist at Deutsche Bank, in a Tuesday note.

The S&P 500 SPX, +1.78% saw a negative return of 6.2% in the period from Election Day, which fell on Nov. 7, through Dec. 14, the day after Vice President Al Gore, the Democratic nominee, concedes following a U.S. Supreme Court ruling on Dec. 12 that ended the recount.

Volatility was less straightforward, however.

“After a hiatus of three or four days as it became clearer that the result of the election could be delayed further, FX realized and implied [volatility], in tandem with bond vol started to slip, and vol only took off again close to when the election was definitively called on Dec. 12,” he wrote. Implied volatility refers to expectations for volatility in a coming period, while realized volatility reflects the actual movement that occurred over a defined past period. 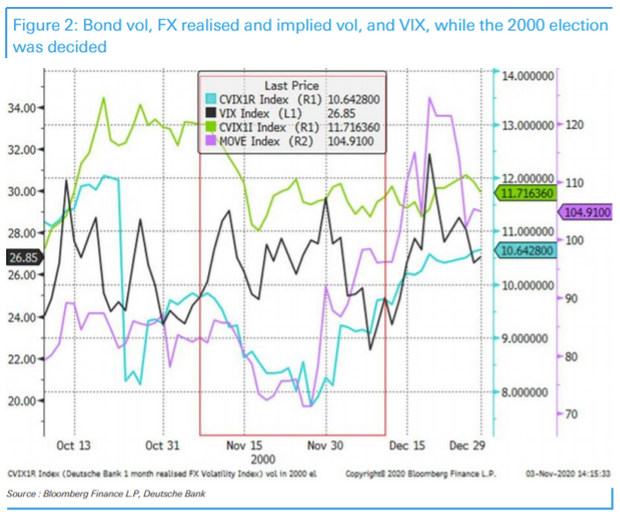 The VIX, a closely followed measure of implied volatility in the S&P 500, has remained elevated in the run-up to the election, trading Tuesday near 35, well above its long-term average near 19.

The lessons for 2020, he wrote, is that a contested election probably again takes the S&P 500, bond yields and the U.S. dollar (at least versus major rivals) “down meaningfully.” Unlike in 2000, however, risk appetite is likely to revive once a resolution is in sight.

“Meanwhile any sign of a long legal battle hurts rather than helps vol, especially realized vol, until close to the point when the election is settled,” he said.