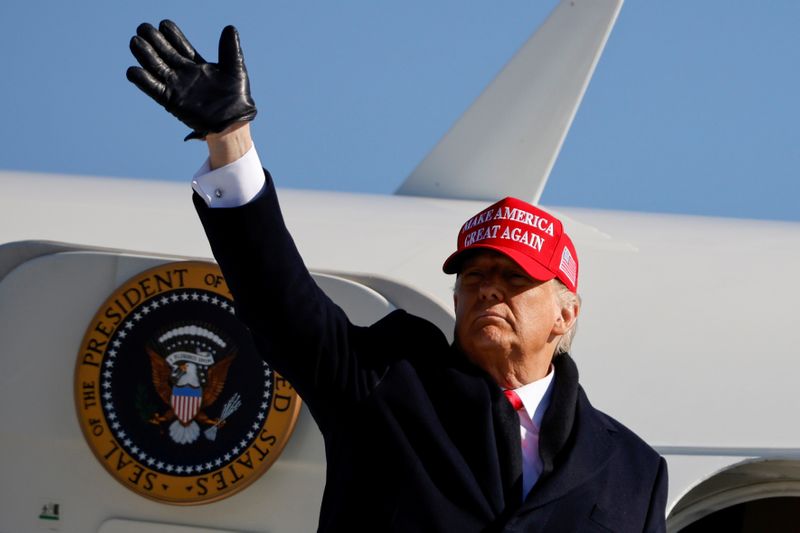 Here is how a re-election of President Trump could impact six key industries. For a FACTBOX on how these sectors might change if former Vice President Joe Biden wins the election, click.

A Trump re-election would leave U.S. automakers caught in the crossfire of a war over climate policy between Washington and the state of California.

California sued Trump for rolling back national vehicle emissions standards and seeking to cancel the state’s authority to mandate sales of electric vehicles.

Automakers stand to save billions in compliance costs under Trump’s emissions approach. But the clash with California over emissions and electric vehicles has divided automakers. It has also left the industry to deal with two sets of regulations for the increasingly divergent coastal Blue state markets and heartland, Red state markets. Automakers have long advocated resolving differences between California and federal climate policy to create a single, national set of standards to guide their technology investments.

During his first term, Trump put pressure on Detroit automakers to step up investments in the United States, attacking General Motors Co (NYSE:GM) and Ford Motor (NYSE:F) Co for decisions to close plants, or invest in China and Mexico. Trump periodically threatened German automakers with tariffs. His steel and aluminum tariffs raised costs for U.S. automakers.

Trump has been a vocal critic of high drug prices but experts say the pharmaceutical industry will likely fare better under a Trump second term than they would if Joe Biden wins the White House.

Trump passed a number of executive orders designed to slash drug prices in his first term but experts say they have had little practical impact.

His efforts to spur Congress to pass new laws to reduce drug costs have been much less successful, in part because his own party blocked a bill that would have allowed Medicare, a government health insurance program, to negotiate lower drug prices with pharmaceutical companies.

Trump, should he win re-election, is expected to continue to slash mining industry regulations and shorten the permitting process, part of a wide-ranging effort to boost domestic production of the minerals used to make electronics, weapons and a host of other goods.

Trump signed several executive orders in his first term that labeled rare earths and other minerals as critical to national defense, ordering the Pentagon to financially support junior projects. The U.S. only has one rare earths mine, though it relies on China for processing. A second Trump term could see multiple new domestic rare earth mines as well as new processing equipment from Rare Element Resources Ltd and others.

At least one mining project could be jeopardized in Trump’s new term, however. Alaska’s Pebble Mine project, a massive copper and gold deposit in the Bristol Bay watershed, has come under criticism by Trump’s son Donald Trump Jr. and Fox News host Tucker Carlson, who have said the mine would destroy areas where they enjoy fishing and hunting. The U.S. Army Corps of Engineers in late August extended its permit review timeline out past the election, a step that came after both privately lobbied the president.

The mine’s developer, Vancouver-based Northern Dynasty Minerals (NYSE:NAK) Ltd, has said the mine can be safely developed. But Alaska’s two U.S. senators, both Republicans, have publicly come out against the mine, adding further pressure on Trump to deny it permits.

Media companies are poised to benefit if Trump gets another four years in office, based on demand for TV, print and digital news coverage since his election in 2016.

While news consumers first tuned in for coverage of the outspoken president and his administration, the triple threat of the coronavirus pandemic, an economic crisis, and racial strife have kept them engaged.

The New York Times, for example, saw its digital-only subscriptions grow more than fourfold between the end of the second quarter in 2016 and the same period this year. Shares of the New York Times Co are up more than 250% since election day 2016.

Ratings for cable news networks AT&T-owned CNN, Fox Corp-owned Fox News and Comcast’s MSNBC – with their loyal, politically-divided followings – are up 72 percent from last year, according to Nielsen. Fox News was the highest-rated network in all of television for prime-time viewers in July, August and September, per Nielsen.

But despite the uptick in audiences, news organizations continue to suffer from declining advertising revenue, spurred by Alphabet (NASDAQ:GOOGL) Inc’s Google and Facebook Inc (NASDAQ:FB), and exacerbated by the pandemic. Many marketers have slashed their advertising budgets, leading news organizations to lay off tens of thousands of employees.

If the negative news cycle continues into a second Trump term, ad dollars may not follow. For years, ad tech firms have offered tools for brands to block ads from appearing on web pages or URLs that include keywords like “shooting” or “murder.” These advertising “blacklists” exploded in usage after the 2016 U.S. election, when brands sought to avoid polarizing news stories. Many brands have been reluctant to buy ads against coronavirus and Black Lives Matter coverage.

A second Trump term could help sustain interest in journalism, with an engaged public glued to the news, and a president who has acknowledged his role keeping them there.

“Another reason that I’m going to win another four years is because newspapers, television, all forms of media will tank if I’m not there because without me, their ratings are going down the tubes,” Trump said in 2017, according to the New York Times.

U.S. President Trump has imposed $370 billion in tariffs on goods imported from China, part of his “America First” agenda. Those tariffs on products ranging from handbags to small electronics are estimated to have cost U.S. importers some $61.6 billion through early September, according to U.S. Customs and Border Protection, and have been blamed for eroding U.S. manufacturing competitiveness. Retailers argue the tariffs will result in higher prices for consumers and lost jobs.

“If Trump wins, he will see the election as a validation of his strategy on trade policy, including his use of tariffs, and will certainly continue to follow this strategy with China,” said Jonathan Gold, National Retail Federation Vice President for Supply Chain and Customs Policy.

The trade organization hopes any new deal can be reached without the threat of tariffs.

If Trump holds the White House, big tech companies will face continued pressure from regulators on antitrust issues. The Trump administration has already sued Alphabet’s Google and a suit against Facebook is said to be coming soon. Should Democrats win the Senate, that could add to the risks for tech, as Democrats are calling for even more scrutiny of practices they say have stifled innovation and reduce competition. Trump may also ramp up his rhetorical war over what he contends is censorship of conservative views on the major social platforms.

The most immediate tech question for Trump will be what to do with TikTok, the Chinese-owned app that his administration says is a security risk that must be transferred to American ownership or banned.

With the election in the rearview, tech companies who depend on China as a supplier or buyer will be watching to see if Trump’s approach to trade ratchets up or cools down.