Home
Stocks
Election Countdown: Trump takes lead in N.C. polls but Biden remains ahead in other battlegrounds, with one more day until election
Prev Article Next Article
This post was originally published on this site 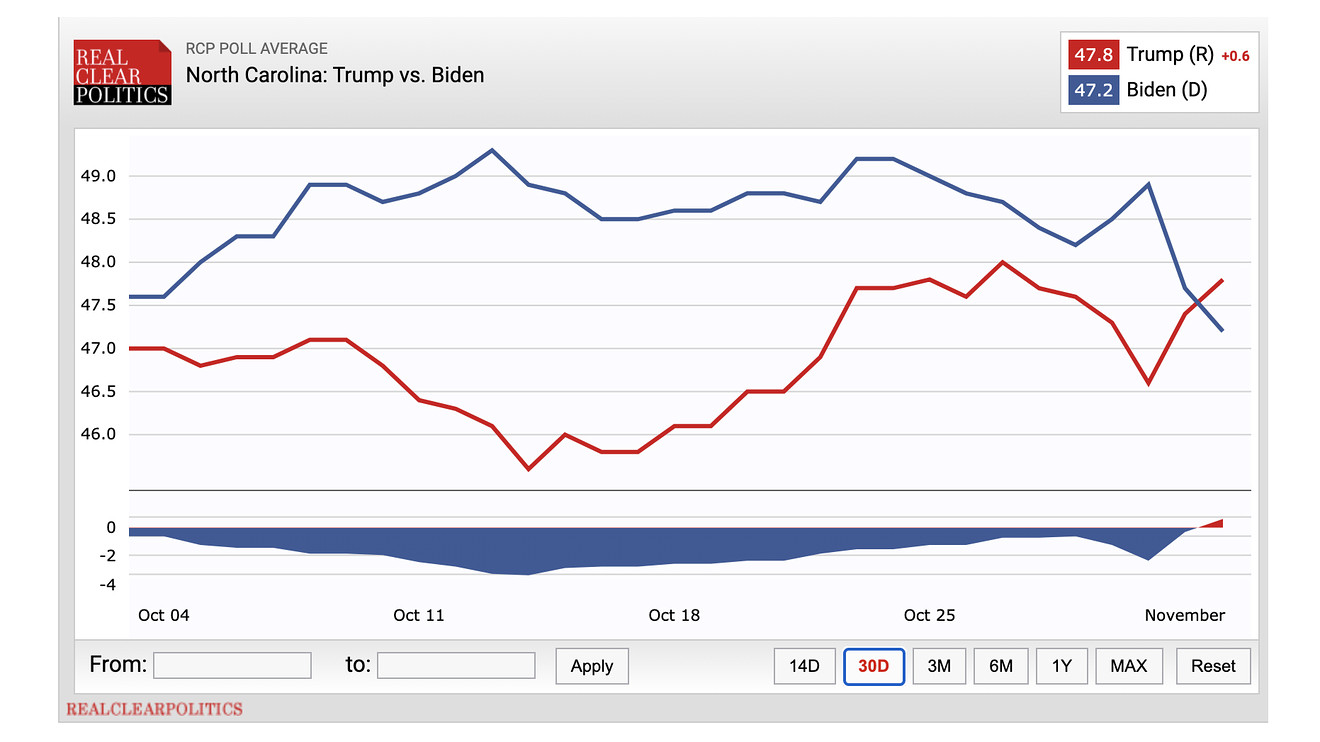 On the eve of Election Day, President Donald Trump has edged ahead of Joe Biden in North Carolina polling, according to a RealClearPolitics moving average of surveys focused on the swing state.

Trump was due to speak a campaign rally in the Tar Heel State around noon Eastern Time on Monday and follow that up with rallies in the battleground states of Pennsylvania, Michigan and Wisconsin.

Meanwhile, Biden on Monday was slated to campaign in Ohio and Pennsylvania.

The Democratic challenger continues to lead the president in RCP’s polling average focused on top swing states that are likely to decide the White House race, but his advantage has dipped to 2.9 percentage points from 3.2 on Friday and 3.9 a week ago, reduced in part by Trump’s improved performance in North Carolina.

RCP on Monday was giving the Republican incumbent a 0.6-point edge in North Carolina, the first time that Trump has been on top in the state in two months. North Carolina offers 15 electoral votes, less than the number at stake in Florida, Pennsylvania or Michigan, but more than what a presidential candidate can get in Arizona or Wisconsin.

And see:Here’s how key swing states are leaning in the presidential race — and how they’re weathering the recession

Election Day is coming as early-voting totals already have surpassed two-thirds of 2016’s turnout, with more than 95 million Americans voting in advance either in-person or by mail due to coronavirus concerns.

Betting markets on Monday were giving Biden a 64% chance of winning the White House, while forecasters at FiveThirtyEight said the former vice president has a 90% chance.

“As the 2020 race closes there are several indicators of momentum for the Trump campaign including a strong 7-point [Iowa] lead from the highly respected Selzer & Co. poll for the Des Moines Register,” said analysts at Height Capital Markets in a note on Monday. But the analysts also said the president faces a “narrow path to victory,” so they continue to see a “70-75% probability for a Biden win.”