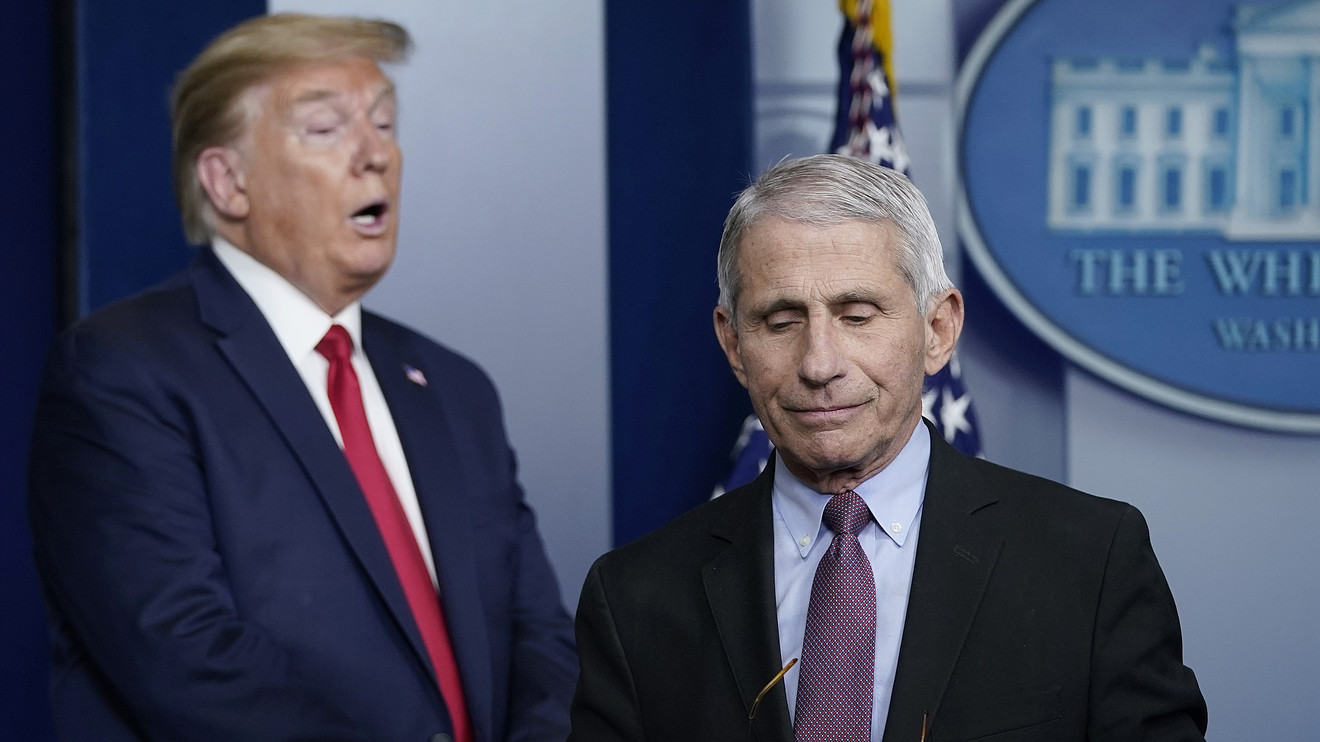 The U.S. death toll from the coronavirus illness COVID-19 rose above 231,000 on Monday with cases rising in 42 states, as President Donald Trump continued to criticize a key infectious-disease expert and even hinted he might fire him if he wins Tuesday’s presidential election.

Dr. Anthony Fauci, America’s foremost infectious-disease expert and the director of the National Institute of Allergy and Infectious Diseases, told the Washington Post in an interview that the U.S. is “in for a whole lot of hurt,” during the winter months with cases spiking across the nation. The U.S. “could not possibly be positioned more poorly,” he said.

Fauci added that the U.S. needs to make an “abrupt change” in public health practices and behaviors as the holiday season approaches, and praised Democratic candidate Joe Biden’s campaign for “taking it seriously from a public health perspective,” rather than Trump’s focus of reopening the country.

His comments drew flak from the White House.

“It’s unacceptable and breaking with all norms for Dr. Fauci, a senior member of the president’s coronavirus task force and someone who has praised President Trump’s actions throughout this pandemic, to choose three days before an election to play politics,” Judd Deere, the White House deputy press secretary, said in a statement.

Fauci’s comments were echoed by former FDA commissioner Dr. Scott Gottlieb, who told CBS News that “things are getting worse” and warning that Thanksgiving could be an “inflection point” for a coronavirus surge over the winter.

At a campaign rally event, Trump criticized the media for their continued coverage of the crisis, prompting chants of “Fire Fauci!” from supporters. “Don’t tell anybody, but let me wait until a little bit after the election. I appreciate the advice,” Trump told the crowd.

The U.S. counted at least 74,113 new infections on Sunday and at least 427 Americans died, according to a New York Times tracker. In the past week, the U.S. has averaged 82,812 cases a day, a 45% increase from the average just two weeks ago.

The U.S. leads the world by case tally at 9.2 million, and death toll at 231,003. More Americans have died of COVID than died in combat in two world wars.

“If the goal is not to control the pandemic, then the spooky data from this week show the goal is being accomplished,” Raymond James analysts led by Chris Meekins wrote in a note to clients, referring to comments made recently by Trump’s chief of staff, Mark Meadows.

“Identified cases, testing positivity rate, hospitalizations, and fatalities all went up last week. Ninety percent of states have a seven-day average number of cases and fatalities higher than the 14-day average, showing the surge is continuing,” Meekins wrote.

Raymond James is not expecting a nationwide shutdown as long as Trump is in office. “ However, local shutdowns are likely in some areas as hospitals feel increased pressure.

There are currently 47,502 COVID-19 patients in U.S. hospitals, according to the COVID Tracking Project, the highest number since Aug. 12 and a 50% increase over the past month.

Internal documents obtained by NPR last week that offer data the U.S. Department of Health and Human Services collects and analyzes daily, show that as of Oct. 27, 24% of U.S. hospitals were at more than 80% of ICU capacity, based on numbers collected by nearly 5,000 “priority facilities.” Hospital use, ICU occupancy and ventilator usage have all increased by 14% to 16% in the past month, the data show. The documents are not shared openly with the public, according to NPR.

• The director general of the World Health Organization, Dr. Tedros Adhanom Ghebreyesus, is in self-isolation after a contact tested positive for COVID-19. Tedros announced the news in tweets, emphasizing the need for everyone who is exposed to the coronavirus to isolate and prevent exposing others.

• The prime minister of Spain, Pedro Sánchez, has called for an end to angry demonstrations around the country against the latest six-month state of emergency imposed by his government as it works to contain the spread, the Guardian reported. Police arrested 32 people and 12 others were injured on Saturday night after a protest at a midnight to 6 a.m. curfew turned violent with protesters setting bins alight and engaging in battles with the police.

• Slovakia has tested almost half of its population over the age of 10 in a first day of nationwide coronavirus testing, Reuters reported. More than a million Slovaks lined up for testing at roughly 5,000 sites. The nation of 5.5 million is the first to conduct such an ambitious testing program and is being watched by other countries looking for ways to slow the spread of the virus.

• Prince William had COVID-19 in April — and “struggled to breathe’’ at one point, sending royal aides into a terrified panic, the New York Post reported. The British royal, 38, who is second in line to the throne, kept the news of his illness out of the press because father Prince Charles and the country’s prime minister, Boris Johnson, had both just come down with the deadly contagion and William was concerned how his illness would worry the nation even more. The U.K. passed the grim milestone of 1 million confirmed cases of COVID-19 over the weekend, according to data aggregated by Johns Hopkins University. The U.K. has the ninth highest case tally in the world and fifth-highest death toll at 46,807. That’s the highest number of fatalities for a European country.

• German biotech CureVac CVAC, -0.53%  said its experimental COVID-19 vaccine triggered a good immune response in humans in a Phase 1 clinical study, putting it on track to launch the final stage of testing before the end of 2020, MarketWatch’s Lina Saigol reported. The Tuebingen-based company said the strongest dose of the vaccine, known as CVnCoV, produced an immune response in volunteers comparable with patients who was hospitalized with COVID-19. The clinical data has not yet been published in peer-review format. “We are very encouraged by the interim Phase 1 data,” Dr. Franz-Werner Haas, chief executive of CureVac said. “It represents a critical milestone in our COVID-19 vaccine program and strongly supports the advancement of our vaccine candidate.”

The number of confirmed cases of COVID-19 worldwide now stands at 46.6 million, the Johns Hopkins data show, and the death toll is 1.2 million. At least 31 million people have recovered from COVID-19.

China, where the disease was first reported late last year, has had 91,403 cases and 4,739 fatalities, according to its official numbers.

What are companies saying?

• Clorox Co. CLX, +4.84%, the provider of home cleaning and care and health and wellness products, reported a fiscal first-quarter profit that was well above expectations, amid strong sales growth due to the COVID-19 pandemic and as people spend more time at home. Sales increased 27.2% to $1.92 billion, above the FactSet consensus of $1.76 billion, as sales of its household products (bags and wraps, grilling and cat litter) jumped 39% and sales of health and wellness products (cleaning, professional products, vitamins and minerals and supplements) rose 28%. For fiscal 2021, Clorox expects EPS of $7.70 to $7.95 and sales growth of 5% to 9%. The FactSet EPS consensus is $7.72 and the sales consensus of $6.94 billion implies 3.3% growth.

• Estee Lauder Companies EL, +1.48% reported a fiscal first-quarter profit and sales that beat expectations, as a strong performance in skin care sales offset weakness in makeup during the pandemic, but provided a downbeat earnings outlook for the current quarter. Sales declined 9% to $3.56 billion, but topped the FactSet consensus of $3.46 billion. Skin care sales rose 10% to $2.04 billion, above the FactSet consensus of $1.89 billion; makeup sales fell 32% to $978 million to miss expectations of $1.24 billion; fragrance sales dropped 12% to $406 million to fall shy of expectations of $408.3 million; and hair care sales were flat at $136 million to beat expectations of $124.7 million. “The COVID-19-related closures of offices, retail stores and other businesses and the significant decline in social gatherings have also influenced consumer preferences and practices,” the company stated. “Demand for skin care and hair care products has been more resilient than the demand for makeup and overall fragrance.” For the second quarter, the company expects adjusted EPS of $1.45 to $1.60, below the FactSet consensus of $1.73. Earlier, it raised its quarterly dividend by 10% to 53 cents a share.

Read also: Why cinema will survive the coronavirus pandemic

• Lumber Liquidators Holdings Inc. LL, +20.70%, the wood-flooring seller, reported third-quarter profit and sales that rose well above expectations, as “an increased willingness of customers to allow contractors into their homes” for installation and home improvement projects amid the pandemic helped boost demand. Sales increased 12.1% to $295.8 million, beating the FactSet consensus of $275.6 million, as same-store sales growth of 10.9% topped expectations of a 3.5% rise. The reinstatement in August of tariffs on goods from China reduced cash flow, as the company started paying the tariffs. “As this product is sold beginning in the fourth quarter, the increased cost of the tariffs will flow through the income statement,” the company stated. Separately, the company said it decided to close all eight of its stores in Canada and to close six stores in the U.S. by the end of the year.

• Norwegian Cruise Line Holdings Ltd. NCLH, -5.29%  is extending suspension of its cruises to include all cruises scheduled through Dec. 31. “The company will continue to work in tandem with global government and public health authorities and its Healthy Sail Panel expert advisers to take all necessary measures to protect its guests, crew and the communities visited,” the company stated.