Home
Stocks
The Tell: Complacency warning? ‘Election premium’ in currency market collapses much like it did in 2016
Prev Article Next Article
This post was originally published on this site 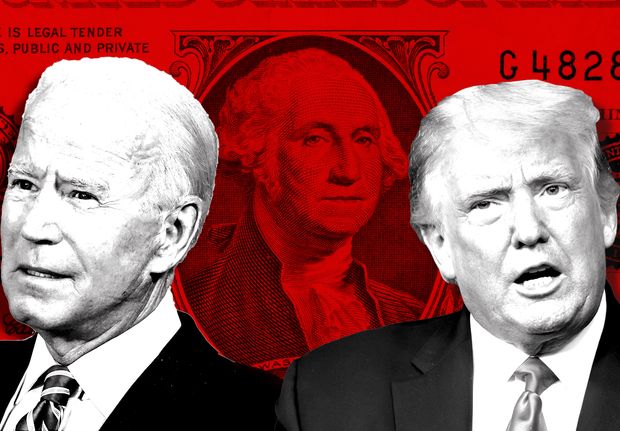 Poll-watching currency traders are growing more relaxed about the prospect for market volatility in the aftermath of the Nov. 3 presidential election, according to the options market.

Are they getting too relaxed?

The “election premium,” derived from measures of implied volatility via the FX options market, has largely collapsed as Democratic challenger Joe Biden holds a wide lead over President Donald Trump which is seen reducing the chances of a muddled or contested election outcome that could spark market turmoil, said Olivier Korber, a currency strategist at Société Générale, in a Tuesday note.

But a similar collapse in the “election premium” in the runup to the 2016 election (see chart below) means traders could be getting “complacent,” he warned. 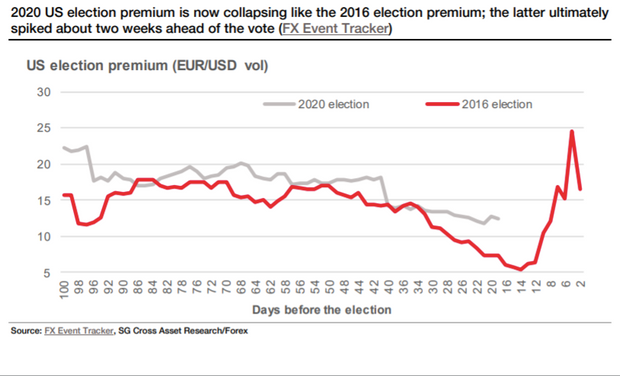 Korber noted that most of the positioning in anticipation of a jump in volatility is concentrated on Nov. 4. There is also some risk priced over the following couple of weeks given the possibility of a delayed or contested outcome, but the premium has been receding.

Fading fears of a contested or drawn-out election outcome have been cited across financial markets, including equities, where stocks have bounced after a September swoon. The Dow Jones Industrial Average DJIA, +0.40% is up around 2.1% so far in October, while the S&P 500 SPX, +0.47% has gained around 2.5%.

See: Why stock-market investors are starting to focus on Biden’s narrowing lead over Trump

Measures of expected equity market volatility around the election have also declined but haven’t disappeared, analysts have noted.

Korber noted that the repricing of risk in the currency options market coincided with developments in the nationwide polls, where Biden’s lead over Trump widened to more than 10 percentage points, the largest gap of the campaign, after the first presidential debate and Trump’s COVID-19 diagnosis. The RealClearPolitics average of polls shows Biden’s lead narrowed to 8.6 percentage points as of Tuesday, but still remained comfortable.

Polling data and publicly available data on betting odds for the election have been fueling action in the options market, he said, but noted that traders were wrong-footed in 2016 by both the U.K. Brexit vote, when British citizens voted to leave the European Union, and Trump’s victory over Hillary Clinton.

“On these occasions, the market reaction was proportional to the surprise, with a big volatility spike and major liquidity disruptions in the Brexit case,” Korber recalled. “While a lead of nearly 10 points in the polls is more confidence inspiring than a tight margin, Trump remains highly unpredictable and the voting process in the COVID context adds uncertainty.”

Korber noted how closely the fall in the election premium has tracked the 2016 pattern, including for major currency pairs like euro/U.S. dollar EURUSD, +0.00% and U.S. dollar/Japanese yen USDJPY, -0.01%, both of which dropped to a low two weeks before Election Day only to rise sharply in the final stretch into Election Day (see charts below).

Korber stressed that he wasn’t saying that such a spike would definitely occur in 2020, “but market participants should be aware that it remains a possibility.

“If the timing were to be the same, a U.S. election repricing is imminent, suggesting a final opportunity to set up a cheap vol hedge,” he said.