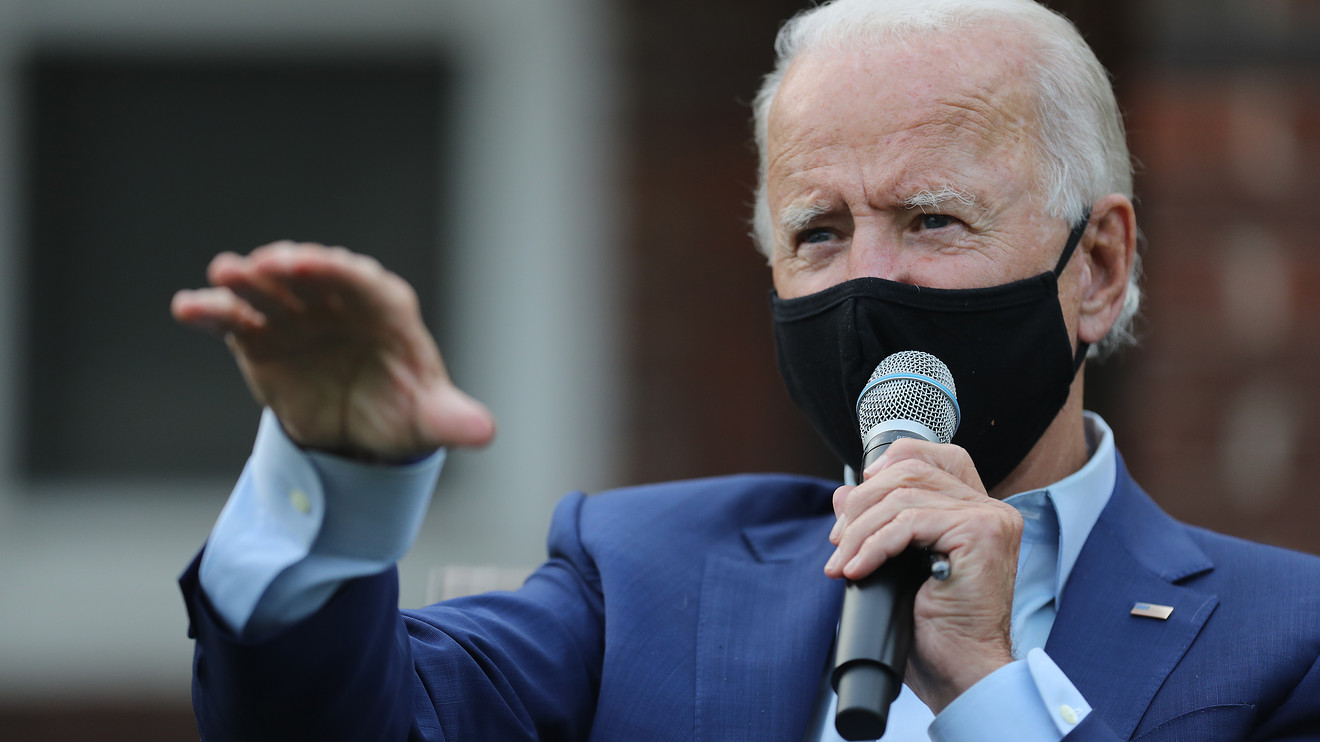 The U.S. death toll from the coronavirus illness COVID-19 was close to 217,000 on Thursday, as Nature magazine became the latest scientific journal to sharply criticize President Donald Trump’s handling of the pandemic, and endorse rival, Democrat Joe Biden, for president.

Nature joins the prestigious New England Journal of Medicine, Scientific American and Lancet Oncology, all of which have published similar op-eds recently and said it’s the first time these apolitical entities have waded into the political arena.

Nature echoed comments made by the editorial board of NJEM just last week, in its criticism of Trump’s attack on science, on the very public health agencies that report to him and should be spearheading the pandemic management, the media, the Department of Justice and even the electoral system itself.

“The Trump administration’s disregard for rules, government, science, institutions of democracy and, ultimately, facts and the truth have been on full display in its disastrous response to the COVID-19 pandemic,” Nature editors wrote.

From the outset, Trump chose not to devise a national strategy to test, contact trace and bolster public-health facilities, instead, “he flouted and publicly derided the science-based health guidelines set by the US Centers for Disease Control and Prevention (CDC) for the use of face masks and social distancing,” they wrote.

The administration later reshaped guidelines, “when the message did not align with its agenda. Trump has lied about the dangers posed by the virus and has encouraged people to protest against policies intended to slow its transmission. The result, if not the goal, has been to downplay the greatest crisis the country — and the world — has faced in at least half a century.”

Trump’s actions have had “devastating consequences,” the editorial continues.

Ohio counted more than 2,000 new cases in a single day, its biggest one-day jump since the start of the outbreak. Ohio currently has 1,042 hospitalized COVID-19 patients and 268 are in intensive care units, according to the Covid Tracking Project. The state’s hospitals are at almost 80% capacity, according to the Ohio Department of Health.

North and South Dakota are also leading the nation in numbers of new cases over the last week, according to a New York Times tracker. A full 28 states are showing higher cases that are staying high, including Montana, Wisconsin, Nebraska, Iowa, Idaho and Wyoming.

North Dakota currently has 206 COVID-19 patients in hospitals, 39 in an intensive care unit, leaving just 13.6% of staffed beds available, according to the state’s health department.

South Dakota has 303 hospitalized COVID-19 patients, and is almost at 70% capacity, according to the state’s department of health.

Trump continued with his campaign rallies on Wednesday with an event in Iowa, his third such rally in three days. Trump and Biden will hold dueling town hall events on live TV later Thursday.

Dr. Anthony Fauci, head of the National Institute for Allergies and Infectious Diseases, expressed his frustration with Trump’s rallies on CBS Evening News.

“You know, I cant advise the president about what he can do and should do with regard to his political campaigns, but I can reiterate my statement that when you have congregate settings of a lot of people together closely packed when most are not wearing masks, that is a risk situation to be avoided,” he said.

See also: When will the COVD-19 pandemic end? History offers a sobering message

• The World Health Organization’s European head has warned that EU governments are not fully prepared for the surge of infections currently engulfing the continent and recommended measures to roll out vaccines as soon as they are available, the Guardian reported. “While the evolution of the pandemic is getting back to March levels, our state of preparedness is not,” the EU executive’s vice president Margaritis Schinas said.

• Private briefings from two senior White House aides to a conservative institution at the outset of the coronavirus outbreak led investors to short the stock market and even load up on toilet paper, according to a published report. Tomas Philipson, then the chairman of the Council of Economic Advisers, and Larry Kudlow, the director of the National Economic Council, told the Hoover Institution of the uncertainties around coronavirus in more stark terms than they had informed the public, according to the New York Times. That led William Callanan, a Hoover board member, to write a memo to David Tepper, the founder of hedge fund Appaloosa Management, and a Tepper aide, the report said. Callanan allegedly wrote that he found it striking that they both mentioned their concerns, unprovoked. The email was then circulated to other Appaloosa employees, who discussed the memo with other investors. The report said the memo helped convince investors to short the stock market.

Don’t miss:COVID-19 Vaccine Tracker: Everything you need to know about the companies with candidates in Phase 1 or later-stage trials

• London has become the latest city to announce tighter coronavirus restrictions as Europe grapples with a spike in new infections. Londoners will be banned from mixing indoors with other householders on Saturday as the city moves to Tier 2 restrictions. The U.K. has the highest death toll in Europe, the Johns Hopkins data shows. The country has lost 43,245 lives to the virus, the fifth highest toll in the world, and has had 657,474 confirmed cases. London follows Paris, which will be subject to a nighttime curfew banning people from being outdoors from 9 p.m. until 6 a.m., except for essential reasons, for four weeks.

Johns Hopkins data show that 26.7 million people have recovered from COVID-19 since the start of the outbreak.

China, where the illness was first reported late last year, has had 90,881 cases and 4,739 fatalities, according to its official numbers.

The number of Americans who applied for jobless benefits in early October shot up to the highest level in seven weeks, possibly a sign that fresh outbreaks of the coronavirus in many states have hurt employment again, MarketWatch’s Jeffry Bartash reported.

Initial jobless claims filed through state programs jumped by 53,000 to 898,000 in the week ended Oct. 10 from a revised 845,000 in the prior week, the Labor Department said Thursday. Economists polled by MarketWatch had forecast new claims to fall to 825,000.

An unadjusted 372,891 people also filed new claims under the Pandemic Unemployment Assistance Act, the federal law that temporarily made self-employed workers eligible for benefits for the first time. That put the number of actual or unadjusted new claims at an estimated at 1.26 million, a touch lower than in the prior week.

There’s a big caveat, however. The number of new claims in California was frozen at 226,179 for the third week in a row. The state stopped updating its figures three weeks ago after launching an effort to whittle down a large backlog, eradicate duplicate claims and weed out fraud.

The state began accepting new jobless applications last week after a two-week pause, but it still isn’t reporting its totals to the U.S. Labor Department. California typically accounts for almost 20% of all new jobless claims in the country, but it’s run closer to 30% during the coronavirus pandemic.

Stripping out California’s estimate, the number of unadjusted jobless claims in the other states rose by 76,670 — a worrisome sign.

“The latest figures on new workers claiming unemployment insurance cast a dark cloud over the nation’s slow economic recovery,” said Andrew Chamberlain, chief economist at Glassdoor Economic Research. “The number of new claims last week is more than four times higher than the pace of workers filing for unemployment a year ago — a sign that COVID-19 continues to deal heavy blows to the nation’s labor market.”

The Philadelphia Fed manufacturing index surged to a reading of 32.3 in October from 15 in September. Economists had expected a reading of 13.5.

The Empire State Index, meanwhile slowed to a reading of 10.5 in October from 17 in September, the New York Fed said. Economists had expected a reading of 14.5, according to Econoday.

What are companies saying?

• Tiffany & Co. TIF, +0.49% offered guidance for the fourth quarter, saying it expects a mid-single digit percentage decline in sales compared with the year-earlier period and a mid-single digit percentage increase in operating earnings. The jewelry company expects per-share earnings to rise by a mid-to-high single digit percentage. The current FactSet consensus of $1.73 is a 3.6% increase from last year’s number. “While we still expect full-year results to be substantially impacted by COVID-19, we are very pleased with the way the business has rebounded following the first quarter and continues to rebound in the third quarter, especially in mainland China, and to recover in the United States,” Chief Executive Alessandro Bogliolo said in a statement. Worldwide sales fell slightly in the two-month period of August and September, while operating earnings rose about 25%. Despite a steep decline in tourism in the U.S., sales three fell by a low double-digit percentage in the two months. “This represents a meaningful sequential improvement since May 2020 to sales declines in the United States each month relative to the same month of the prior year, and the company expects the sales trends in the United States to further improve in the fourth quarter,” said the statement. Tiffany has more than $1 billion cash and expects to have about $900 million at year-end.

• Walgreens Boots Alliance Inc. WBA, +3.84% reported a fiscal fourth-quarter profit that fell less than expected, while revenue rose above forecasts. For the U.S. retail pharmacy business, sales grew 3.6% to $27.0 billion to top the FactSet consensus of $26.77 billion, as same-store sales increased 3.6% and prescriptions filled rose 1.6%. Retail pharmacy international sales fell 14.9% to $2.3 billion, compared with expectations of $2.2 billion, and pharmaceutical wholesale sales grew 4.3% to $6.0 billion to beat expectations of $5.9 billion. “While the company anticipates a gradual reduction in COVID-19 impacts, the first half results will continue to be negatively impacted when compared with the pre-COVID-19 first half of fiscal 2020,” the company said in a statement. “However, for the second half, the company anticipates strong adjusted EPS growth, as these effects subside and recovery plans take hold in key markets.”

• YogaWorks Inc. YOGA, -22.33%, the chain of studios and international yoga schools, has filed for chapter 11 bankruptcy, the latest company to fall victim to the pandemic. The company has entered into a stalking horse bidder agreement with Serene Investment Management in which Serene will acquire YogaWorks’ digital and education business as well as its intellectual property. Serene will also provide debtor-in-possession financing to support YogaWorks through the bankruptcy, though the amount was not disclosed. YogaWorks will continue operating via its live stream and on-demand platforms; all in-person studios are closed across the country due to COVID-19. YogaWorks has more than 40 live streaming classes and more than 1,000 pre-recorded classes and workshops. Employees will continue with their work and receive pay and benefits as usual.