Home
Stocks
The Margin: Trump and Biden will compete in dueling town halls at the same time Thursday
Prev Article Next Article
This post was originally published on this site 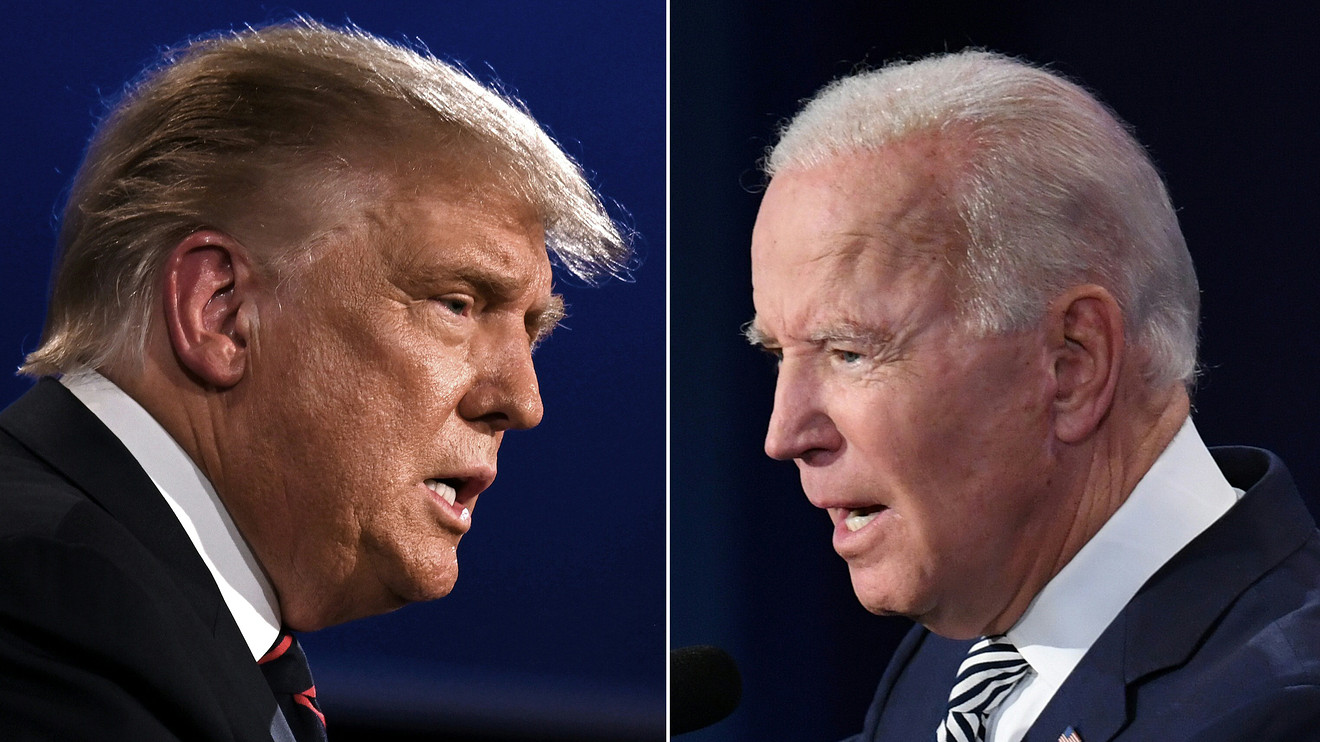 The second presidential debate may be canceled, but there will still be plenty of political fireworks on Thursday night.

Biden will participate in a 90-minute Philadelphia town hall moderated by ABC News chief anchor George Stephanopoulos, which has been scheduled since last week.

But NBC dropped a bombshell on Wednesday, announcing that Trump will also field questions from voters in a competing hour-long Miami event moderated by “Today” show host Savannah Guthrie. Both events begin at 8 p.m. Eastern on Thursday.

So how did we get here?

Trump and Biden were supposed to face off in person once more during the second presidential debate on Thursday night ahead of the Nov. 3 elections, but the president’s recent COVID-19 diagnosis complicated those plans. Out of an abundance of caution, the nonpartisan Commission on Presidential Debates opted to host a virtual debate instead — especially since the scheduled town hall format would include regular voters. But President Trump said that he wasn’t going to “waste my time” sparring with Biden remotely, so the commission canceled the second debate last Friday.

That same day, ABC News announced it would hold a town hall with Biden in Philadelphia on Oct. 15 during a live special edition of “20/20,” where voters could question the Democratic candidate less than a month before Election Day in lieu of the previously scheduled debate.

But on Wednesday, NBC revealed it would be hosting President Trump in its own town hall event during the same time slot.

Related:Trump raised 5 times as much money from America’s top CEOs as Biden

The Biden campaign was not immediately available to comment on the competing events, but Trump campaign spokeswoman Samantha Zager told MarketWatch in an email that, “If Joe Biden can do an in-person town hall, there’s nothing preventing [Trump] from doing an in-person debate in Miami as originally scheduled.” She also noted that his doctor has cleared him to attend in-person events.

Voters had plenty to say on social media, however, with many Trump critics threatening to boycott the Comcast-owned CMCSA, -1.32% network, leading to the hashtags #boycottNBC and #boycottMSNBC to trend on Twitter TWTR, -2.17%  on Wednesday. Many argued that because the president pulled out of the scheduled debate, then he shouldn’t be given a platform that competes with his opponent’s time slot.

“Trump canceled the debate. He does not deserve your airtime,” one person commented under NBC’s post announcing the Trump town hall.

“This is ‘Don’t See TV,’” tweeted another

Some voters also called on the Disney-owned DIS, -1.83%   ABC to reschedule Biden’s town hall to air before or after the president’s event, out of concern that Trump’s program would siphon viewers away from Biden’s event. “You will lose this battle,” wrote one commentator

“Please move Biden to either before or after Trump,” wrote another.

Others questioned how voters will be able to listen to both candidates, and make an informed decision, if the two men are speaking at different events on different networks at the same time.

Neither NBC nor ABC was immediately available for comment but an NBC statement shared on Twitter noted that Biden had already participated in a town hall moderated by Lester Holt on Oct. 5, and Trump’s event will follow the same format and air in the same time slot. And it should also be noted that while Biden has appeared on NBC and MSNBC 13 times since March, the president hasn’t appeared personally on either Comcast network at all.

Regarding the commander-in-chief’s health, the White House doctor reported on Monday that the president tested negative for COVID-19 on consecutive days. NBC News also said it was given a statement by Dr. Clifford Lane, the clinical director at the National Institutes of Health, indicating that he and Dr. Anthony Fauci had reviewed Trump’s recent medical data, and concluded “with a high degree of confidence” that the president was “not shedding infectious virus” anymore.

Still, the town hall with Trump will follow safety procedures, such as being held outside of Miami’s Pérez Art Museum. Audience members will be required to wear masks and to remain socially distanced, and every NBC News staffer will be tested for COVID-19 on site in Miami. Trump and Guthrie will stay at least 12 feet apart from each other and the audience, as well. The NBC News Trump Town Hall will air across NBC, MSNBC and CNBC, stream on NBC News NOW, and be available in Spanish on Telemundo’s digital platforms. It will also be available on demand on the Peacock streaming app.

Biden’s town hall will be held at the National Constitution Center in Philadelphia, and will also be held in accordance with state and local government health and safety regulations. The 90-minute town hall will be followed by a 30-minute post-show. “The Vice President and the People” town hall will air on ABC and stream on ABC News Live, which is available for streaming on ABCNews.com and the ABC News and ABC mobile apps. ABC News Live will also stream on Hulu, The Roku Channel and YouTube TV.

The third presidential debate, scheduled for Oct. 22 in Nashville, is still on — for now. It will be moderated by NBC News correspondent Kristen Welker.