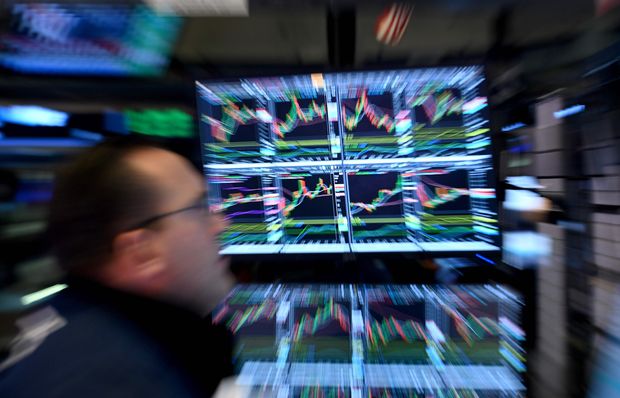 Stocks rallied Friday amid signs of progress on a potential stimulus bill. In this file photo, a trader walks past a screen during the closing bell at the New York Stock Exchange (NYSE) on March 17. (Photo by Johannes EISELE / AFP) (Photo by JOHANNES EISELE/AFP via Getty Images)

The carousel of on-again, off-again fiscal stimulus talks in Washington sped up Friday, as major figures hinted progress was being made on a big deal previously considered dead.

“We’re anticipating some answers to some questions that we have and we respond to some of the questions they have. It’s all in the language,” Pelosi said in an interview on MSNBC.

“I do hope that we will have an agreement soon,” she said Friday.

Pelosi pressed Mnuchin Thursday on whether Trump wanted a comprehensive deal or just a smaller one, after she publicly rejected a standalone bill for airline aid only. Trump appeared Friday to favor a large deal.

“Go Big!” he tweeted not long after Pelosi’s interview aired.

Stocks reacted positively to the news, as the Dow Jones Industrial Average moved up more than 200 points DJIA, +0.58%.

Amid reports the administration was willing to go to $1.8 trillion from its previous level of $1.6 trillion in its offer, Larry Kudlow, director of the White House’s National Economic Council, on Friday said Trump had signed off on a revised offer.

The situation marks a sharp turnaround from Tuesday afternoon, when Trump tweeted he was pulling out of talks and both Pelosi and Senate Majority Leader Mitch McConnell appeared to accept the negotiations were over until after the election.

But McConnell’s path to getting a deal of more than $1 trillion passed in the Senate would appear difficult, and he mentioned Thursday several members of his caucus thought there should be no additional stimulus at all.

And even if Trump and Democrats can agree on a dollar figure, there is no guarantee they can agree on policies in a package as well.