Home
Stocks
CityWatch: Funny’s never easy! Now try it in a pandemic!
Prev Article Next Article
This post was originally published on this site

If so, it wasn’t in a New York City comedy club. The clubs have been empty, dark and forlorn since March.

The gyms are open. The bowling alleys are open. So are the nail salons, tattoo parlors and blow-out bars. Even the restaurants are open again with inside dining now capped at 25%.

So why not the city’s comedy clubs? Is there something uniquely risky about a two-drink minimum or making fun of how totally messed up the world is and how ewed-scray all of us are? Yes, laughter is contagious and stand-up comics have been known to kill. But doesn’t Gov. Andrew Cuomo realize? Those are just metaphors!

“I challenge anyone to explain why comedy clubs would be less safe to operate than restaurants or bowling alleys,” said state Sen. Michael Gianaris of Queens, who’s carried the club-owners’ case to Albany. “There is no good reason to keep them closed when these other establishments are open. All that does is further hurt our economic recovery.”

“I respect the job the mayor and the governor have to do,” he said. “I really do. But somebody should revisit us and see how we are set up to respond. We sell tickets online. So we can do contact tracing. We can social distance the tables. Everybody can wear a mask. We can put up plexiglass. Just give us the guidelines that you think are safe. We will follow them.”

Unlike at regular bars, Mazzilli noted, all his patrons sit at tables. The ceilings are high and the ventilation system really cranks.

“If I had to keep the tables 10 feet apart, I could do that,” he said. “But it’s hard to plan for the future when we don’t know what the future might be.”

And what about the comics who work the city’s dozens of small and large venues? Well, they’ve all had time to work on their writing and discover the joys and frustrations of trying to be funny on Zoom ZM, +2.59%

“Artists have to be resilient,” said Jim Mendrinos, who’s been a familiar face in New York comedy for three decades and is the author of “The Complete Idiot’s Guide to Comedy Writing.”  “But this is definitely testing everyone’s resilience.”

He and his friends are trying everything, Mendrinos said.

And, no, comedy over Zoom isn’t quite the same.

Even the magic of two-way audio streaming doesn’t equal hearing laughter in the room. “We depend on split-second timing. I am watching a lot of experienced comics struggle with the time lag on line.”

Those with a storytelling bent have it easier than comics who employ a fast-paced, set-up-punchline, set-up-punchline style. “But there’s a learning curve no matter what the style is,” Mendrinos said.

Maureen Langan, who pitches her topical style as “always fun, always smart,” agrees that times have been trying for everyone in comedy. Or as she puts it: “Wines sales are up, and it’s not just me.” But she too has used the club lull to build up other parts of her career. 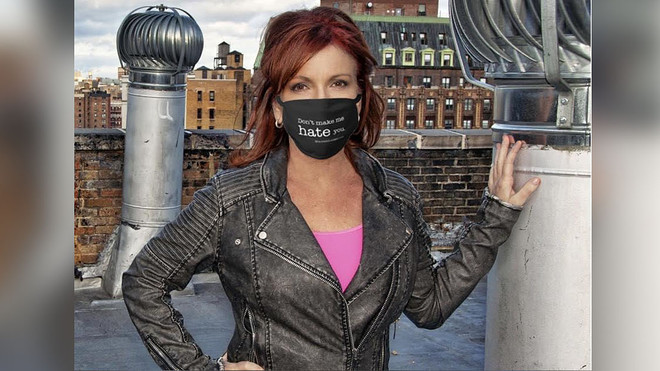 Maureen Langan has been taking more corporate hosting gigs and expanding her audio and video podcast, “Hanging with Langan.”

“I don’t love the Zoom shows and the virtual tip jars,” said Langan, who grew up in Lake Hiawatha, New Jersey, where there is no lake, before moving to the city. “For me, the allure of stand-up is being live and connecting with people and all the effervescence. So I’ve been calling on my skills as a broadcast journalist.”

Also read: In the NYC subways: No fines, no arrests. Instead, ‘mask liaisons’ in blue

Having spent years as a TV anchor and radio talk host in New York and San Francisco, Langan has been taking more corporate hosting gigs and expanding her audio and video podcast, “Hanging with Langan.”

“Now’s the time to do this,” she said. “So I keep asking, ‘How do I get on this platform? What website goes where?’” She’s already moving her audience to Facebook Live FB, -0.19%  , her own website, Spotify SPOT, -0.40%   and various Apple AAPL, +1.12%   platforms. She’s also building a subscription model through Patreon, where fans are offered virtual happy hours, inside comedy dirt, behind-the-scenes access and “Don’t Make Me Hate You” T-shirts.

“But my heart really hurts for my comedy friends,” she said. “They’re the best group of people — educated, really hard working. And they are struggling now. I worry about them. No one has any idea how long this is going to last.”

Ellis Henican is an author based in New York and a former newspaper columnist.