Home
Stocks
Key Words: ‘We’re getting great reports from the doctors’: Trump tweets second video from Walter Reed — and later gives thumbs-up to supporters from motorcade
Prev Article Next Article
This post was originally published on this site

President Donald Trump tweeted a second video of himself on Sunday afternoon from the Walter Reed Medical Center to update the nation on his progress after being diagnosed with COVID-19, the disease caused by SARS-CoV-2.

Shortly afterwards, the president drove by cheering supporters outside the hospital. He was barely visible in the back of the car, waving from the back seat while wearing a black mask, and giving the crowd a thumbs-up.

“We’re getting great reports from the doctors,” Trump said in a video on Twitter while standing, dressed in a white shirt and navy blue suit. “This is an incredible hospital, Walter Reed. The work they do is just absolutely amazing, and I want to thank them all.”

(He also released a video from the hospital on Saturday.)

Trump, 74, was moved from the White House to Walter Reed medical center late Friday, the same day that he and first lady Melania Trump had tested positive for coronavirus. His medical regimen highlighted how the president is in a high-risk group for more serious illness from COVID-19.Õ

He appeared upbeat on Sunday evening. “I’ve also gotten to meet some of the soldiers and first responders and what a group,” Trump said. “I also think we’re going to pay a little surprise to some of the great patriots we have on the street, and they’ve been out there for a long time.”

Trump suggested he would pay them a visit. “They’ve got Trump flags and they love our country, and I’m not telling anybody but you, but I’m about to make a surprise visit so perhaps I’ll get there before you get to see me,” he added.

Trump also said he’s learning a lot about COVID-19. “But when I look at the enthusiasm and we’ve had enthusiasm probably like nobody’s ever had,” the president added. “It’s been a very interesting journey. I’ve learned a lot about COVID. I learned it by really going to school.”

“This is the real school,” Trump added. “This isn’t the ‘let’s read the book’ school, and I get it and I understand it, and it’s a very interesting thing and I’m going to be letting you know about it.” He signed off: “In the meantime, we love the USA, and we love what’s happening. Thank you.”

Trump could leave the hospital as early as Monday and continue to receive care at the White House if his condition continues to improve, Conley added.

Related: Here’s how Trump’s positive coronavirus test has shaken up the campaign — plus what could happen next 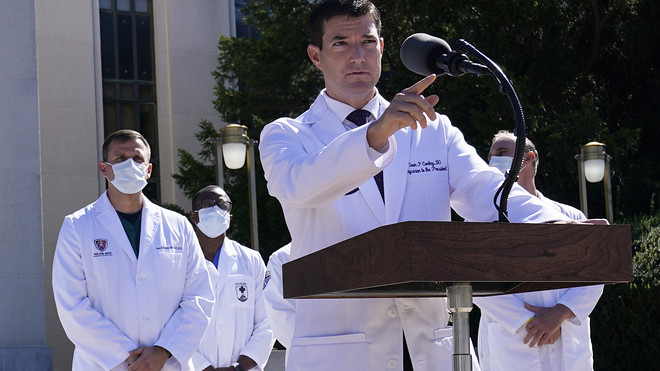 The Dow Jones Industrial Index DJIA, -0.48%, the S&P 500 SPX, -0.95%  and the Nasdaq Composite COMP, -2.22% all closed lower Friday in the wake of the president’s diagnosis; the Nasdaq was down 2.2% at day’s end. Doubts about traction for further fiscal stimulus from Washington may be another factor discouraging investors who have been betting on Republicans and Democrats striking a deal to offer additional relief.