Home
Stocks
The Tell: How Tesla stacks up against other tech juggernauts at similar stages — there’s good news and bad news
Prev Article Next Article
This post was originally published on this site 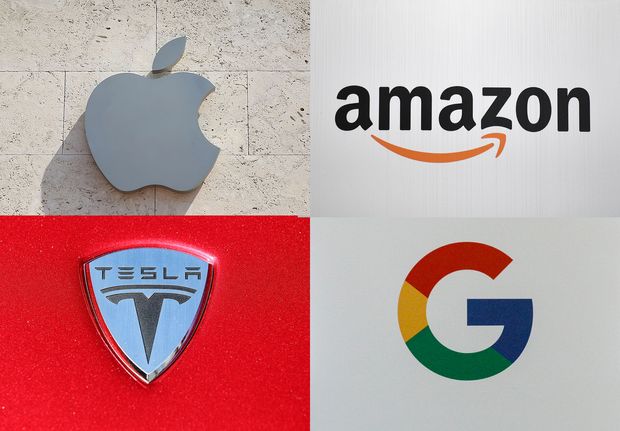 How does Tesla compare?

Tesla shares are up almost 800% over the past year, with investors hoping that the company’s buzzy strategy update on battery technology Tuesday will provide another boost.

But are Tesla’s TSLA, -5.59% best days behind it, as bears would have you believe? Perhaps a look at the historic performance of some other highfliers can offer some perspective.

Morningstar researcher John Rekenthaler took a Wall Street “time machine” this week back to when high-tech giants Alphabet GOOG, +2.39%, Apple AAPL, +1.57% and Amazon AMZN, +5.69% were at similar stages of their development, as determined by the year in which their inflation-adjusted revenues most closely matched those of Tesla.

As you can see, Alphabet in 2007, by every measure, was much cheaper than Tesla is today.

“Alphabet had meaningful profits, which traded at a relatively modest P/E ratio of 50 – a steep multiple for most companies but not for one growing as rapidly as Alphabet,” Rekenthaler wrote, pointing out that Tesla has just begun to turn a profit.

“All things being equal, it’s cheaper to peddle electronic services than items constructed from metals, plastics, and rubber,” he said.

Rekenthaler said Apple is a better comparison, considering it actually sells tangible products. Its cost of goods sold is 62%, which is ahead of the car industry but behind the top internet companies.

“As with Tesla, Apple has built a dominant brand through design, functionality, and marketing,” he wrote. “Both companies command significant pricing power.”

Still, the valuations aren’t even close, with Apple’s price/book and price/sales multiples roughly one-fifth of Tesla’s, while its P/E ratio was only about double that of the broader stock market.

“At the time, there were widespread doubts Apple would be able to sustain its success by constantly enhancing its product line,” he said. “Plainly, those same concerns do not afflict Tesla.”

He explained that Tesla is earlier in its corporate cycle, posting a 50% revenue-growth rate over the past five years, compared with Apple’s 2006 mark of 29%.

“Whether Tesla can maintain that blistering pace is, of course, open to question,” Rekenthaler wrote. “The company’s revenue-growth rate has dropped each year since 2015, when it was 103%.

Rekenthaler acknowledged Amazon isn’t a particularly apt comparison, but he said any list of “glamor stocks” has to include one of the only three companies with a $1 trillion in market cap.

“Once again all three price indicators landed far beneath those of Tesla, and once again Tesla’s revenue-growth rate was appreciably higher,” Rekenthaler wrote. “Apple and Amazon occupy different industries, and have succeeded for different reasons, but during the latter half of the 2000s their stocks were similarly priced.”

So, the bad news for Tesla longs is that all three of these companies were much cheaper at similar stages of their business cycle. The good news, however, is that even at triple the price, all three of those stocks would have still delivered big gains for shareholders.

“This analysis takes for granted that Tesla’s business will enjoy extraordinary success,” Rekenthaler said. “My comparisons have been with the stock market’s few great winners, not with the many not-great losers that once were household names but have since faded into obscurity. “

His best guess is that Tesla will continue to thrive, though it might not quite live up to the expectations of its wildly loyal fans.

“Tesla’s stock price is not necessarily crazy, although certainly ahead of itself,” Rekenthaler concluded. “If Tesla can progress from leading among electric-car manufacturers to spearheading robotaxi development – as is assumed by Tesla’s proponents – then the company should eventually be able to justify its $400 billion market cap.”

At last check, Tesla shares were down almost 6% in Tuesday’s session, sitting out a rally that saw the Dow Jones Industrial Average DJIA, +0.51% reverse course and rally by triple-digits. The Nasdaq Composite COMP, +1.71% and S&P 500 SPX, +1.05% were also higher.