Home
Stocks
Next Avenue: Social Security, Medicare, prescription drug prices—Aging in America panel weighs in on election topics
Prev Article Next Article
This post was originally published on this site 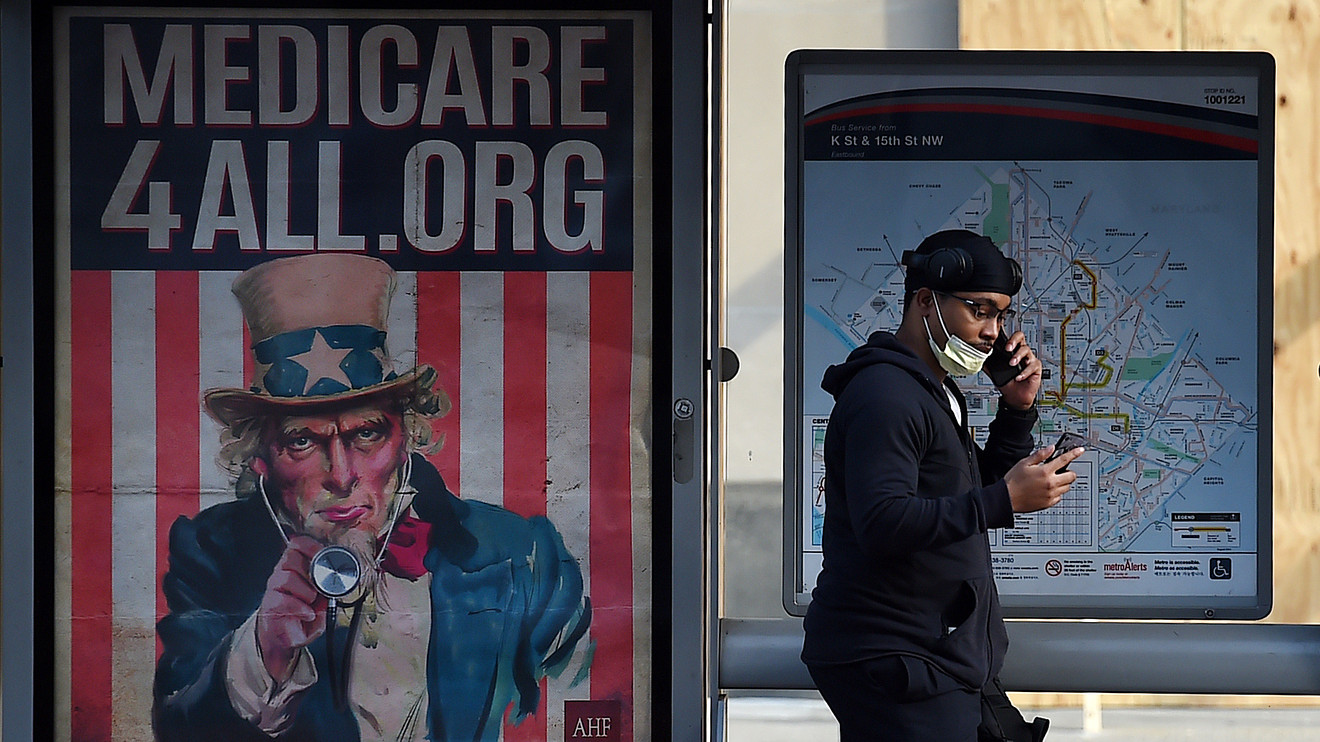 What’s in store for older Americans from the 2020 presidential election?

For answers, the American Society on Aging (ASA) just hosted its Panel of Pundits — an annual event that’s been running for almost 20 years. I moderated. Normally, the panel is held at ASA’s annual Aging in America conference to a standing-room crowd. This year, of course, it was a webinar; nearly 200 people watched.

The five panelists brought a range of political perspectives and decades of experience in the aging and political worlds:

I opened the session asking the panelists to give a one-word description of 2020 so far. The responses were as dire as the year has been; Newton-Small called the year “Armageddon.”

During the freewheeling webinar, I asked the pundits everything from their outlook for a coronavirus vaccine (they were divided on whether there’d be one in 2020) to whether the Senate would flip in November and become Democratic-controlled (most thought it would, but said not to count out the re-election of current Republican Senate Majority Leader Mitch McConnell).

Panelists were united on two issues: All thought the 2020 federal election would not go off without serious hitches, which could delay final election results. And all were in support of a fourth coronavirus emergency package, but most felt it wouldn’t be done by October 1.

Here’s where they came down on four key topics: Social Security, Medicare and telehealth; prescription drug prices and their views on the top aging-related policy change they’d like to see, whoever is elected president:

Most of the pundits felt that Social Security was not on the table as a 2020 election issue. However, most felt its solvency would be a serious issue in 2021 caused by increased unemployment lowering contributions to Social Security as well as the rising deficit.

I asked whether President Trump put Social Security back on the political table when he suspended its payroll tax to provide stimulus checks to the American public. And, I queried, shouldn’t we start thinking seriously about the exhaustion of the Social Security trust fund?

See: This is one Trump tax cut you really don’t want

Joel White: “Wait a minute. Wait a minute. Do we care about the Trust Funds and fiscal responsibility and all that stuff? Are you kidding me? We’ve got a $3.3 trillion deficit staring us in the face according to CBO [Congressional Budget Office] and the last time I heard someone on the Hill talk about trust fund balances and deficits and stuff like that, I think I was still on the Hill [from 2004-2007]. I don’t think the Social Security issue is back on the political table this year. I think it’s back on the table next year, when we have a budget, whether Biden is elected or Trump is re-elected.”

Rich Browdie: “I would agree with Joel’s assessment…. And I do think that the Social Security financing thing will be back, and the next president, whether he’s planning to deal with it or not, he’s going to have to dip in.”

Related: Why you might not know that Trump is threatening your Social Security

Peter Kaldes: “I suspect that if candidate Biden wins, the next day we’ll start hearing about balancing budgets again. So, I’m a little concerned about that. But I’m with Rich on this one; I think…using payroll taxes as a tool is something that President Obama did as well in some ways.”(In 2011 and 2012, the Obama administration cut payroll taxes by 2 percentage points to 4.2 percent.)

Jay Newton-Small: “The Republican National Convention for the first time, I think in history, did not have a platform this year. So, it’s hard to know for sure what President Trump’s second-term agenda, if he were to be re-elected, would be. But he’s certainly spoken a lot about tackling deficits and entitlements like Social Security, Medicare and Medicaid and appeasing more of the fiscal conservatives that he’s got. But I do think, similarly, Joe Biden — as Peter was saying — if he were elected, would also tackle those issues.”

John Zogby: ‘Social Security really faces insolvency just 10 years from now. So, when do we begin the debate again about either a new funding mechanism for Social Security, because demographically, there aren’t enough young people who are working to sustain the numbers of baby boomers and income Gen Xers? Ten years is not far away. Or are we in a situation where we kick the can down the road? But at least for now, the federal debt and deficit continue to grow almost exponentially and yet Social Security is just not on the table right now. But it has to be.”

I asked the pundits this question posed by webinar watcher Next Avenue’s Money & Policy editor, Richard Eisenberg: “How will Medicare change under the next president and why?”

Peter Kaldes: “I think there are some wonderful opportunities under a Biden administration to really focus on the salaries of our caregivers and the direct care workforce. To the extent Medicare gets more involved with actual covering more of these at-home costs that are very real for people, I think that would be a wonderful addition to Medicare.”

Jay Newton-Small: “I do think Donald Trump has certainly telegraphed that if he was re-elected, he would move towards a Paul Ryan, voucher-esque kind of plan for Medicare, which you definitely would never get through a Democratic-controlled House… It’s interesting to see Biden move to the left thanks to Bernie [Sen. Bernie Sanders] and [Sen.] Elizabeth Warren in the primaries on the issue of Medicare for All. He doesn’t support Medicare for All, but I think he has certainly moved further along than he was when the election started. That said, I know a lot of people in the caregiving world were disappointed that his only nod to caregiving was a $4,000-a-year kind of tax rebate for family caregivers… I think a lot will depend on the control of Congress. You’re not going to make massive changes to Medicare unless you control both houses of Congress and the White House, as Obamacare showed how hard it was to get that through.”

Rich Browdie: “There’s a lot of ways that Medicare can be adjusted to pragmatic solutions to things we’ve learned in this COVID experience… So, I would think that pragmatism would lead to a number of changes in Medicare. Partially for budget reasons, because it would be cheaper; partially because I think the sensibility about coverage has changed… You may not get to universal coverage by a particular government program, but I think the pressure to keep movement toward universal coverage will continue.”

Joel White: “I think if next year is a big budget year, we’re going to see big changes in Medicare… What is interesting to me is that both presidential candidates agree that there ought to be a cap in costs in out-of-pocket expenses in Medicare Part D [the prescription drug part]. I think it would put on the table in a big budget bill a cap on total costs, whether you’re in fee-for-service [traditional Medicare] or otherwise in the Medicare program [Medicare Advantage private insurance plans], which would be good, so you’re limiting your out-of-pocket costs… If a big budget deal is not in the works, I think Rich is right; there’s going to be much more in the way of these pragmatic little problems bubbling up that we’re going to fix and that’s across the board — home health, nursing care, hospital care, physician services. The Medicare program right now is kind of in need of some tender loving care and these kinds of bills come across about once every seven years and guess what next year is — it’s the seventh year in the process. So, I think something’s going to happen, whether it’s big or small.”

All panelists hailed the increased use of telehealth for Medicare beneficiaries during the pandemic, thanks to temporary COVID-19 rules, and hoped that many of the new policies enabling its greater use would remain permanent after the pandemic.

However, some panelists voiced concerns about access to telehealth caused by the “digital divide” that some older adults are facing.

Joel White: “I think that what we see in access is really that Black and brown communities are significantly disadvantaged here, largely because of access to broadband…  And so, I think we need to … make telehealth available across the country: rural, suburban and urban.”

Peter Kaldes: “I think telehealth is here to stay. I would echo the sentiment that the guidelines need to be made permanent.”

Jay Newton-Small: “I think that telehealth is the genie that is not going to be put back in the bottle now that people have realized how convenient it is.”

John Zogby: “It’s here to stay and to expand as well.”

I asked the panelists whether the ability for Congress and the president to agree to a meaningful prescription drug bill had passed this year.

Jay Newton-Small: “I think it has, unless they tack it onto the larger spending bill.” (Kaldes and Browdie agreed.) But, Newton-Small added, “There usually is a very productive lame-duck session after the presidential election as they clear the decks for either the next president coming in or the next term of the current president. And I would say there’s a potential for that if there’s enough bipartisan agreement. But I don’t think before the election, unless it somehow miraculously gets piggybacked onto a COVID bill.”

Joel White: “I think it’s more likely that the president is going to issue some programs around the executive orders that he signed at the end of July…The other thing that we are seeing here is that drug prices are actually down; they were negative last year, at 1.7% this year, a full percentage and a half point lower than they were under President Obama so I think a lot of the political desire to go after the drug companies has dried up.”

One of the more interesting questions during the webinar was posed by an audience member who asked what the panelists thought the top aging-related policy change should be, whoever’s elected president. The responses:

I found it interesting that none of the panelists talked about long-term care and long-term services and supports as election issues. This may suggest that the biggest financial liability issue facing boomers may not yet be seen as a political imperative issue.

No panelist was willing to give a definite answer as to who they thought would win the presidential election. Time, as pundits like to say, will tell.

Clearly the realities of 2021 will ensure the next Panel of Pundits will have plenty to discuss.

Bob Blancato is national coordinator of the Elder Justice Coalition, a national advocacy voice supporting elder justice in America, and president of Matz Blancato and Associates. He is a 2016 Next Avenue Influencer in Aging and winner of the American Society on Aging’s 2020 Hall of Fame Award.