Home
Stocks
The Ratings Game: Beyond Meat downgraded at JPMorgan as Impossible Foods snaps up share
Prev Article Next Article
This post was originally published on this site 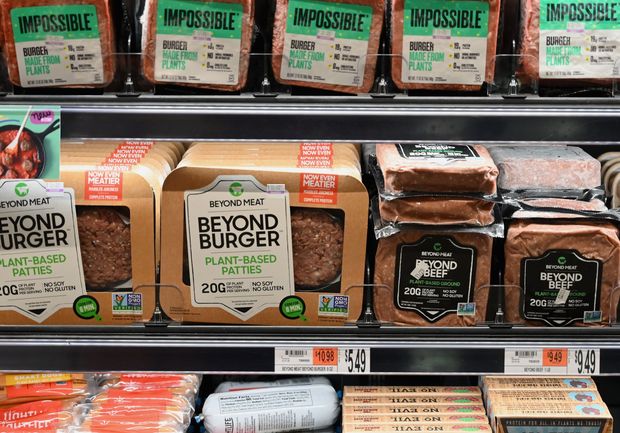 Beyond Meat Inc.’s stock was downgraded to underweight from neutral at JPMorgan on Friday with analysts citing market share loss at grocery stores to its biggest competitor, Impossible Foods Inc.

Analysts also cited a pullback at restaurants, which are slower to add “complexity” to the menu during the COVID-19 pandemic.

“In the long run, we believe Beyond Meat’s growth opportunity is excellent, and we see the company as well managed with strong innovation and marketing plans,” JPMorgan said. “But we believe Street estimates are a bit aggressive right now – especially with chief rival Impossible Foods making strong inroads into Beyond Meat’s on-shelf presence, and with many restaurants not adding menu items – and we think the stock is ahead of itself.”

Beyond Meat stock closed Thursday at $157.22

“Due to intensifying competition (both local and abroad) from other pure-play alternative meat companies and from larger packaged food companies, along with an expectation that Beyond Meat will continue to aggressively lower prices to reach price parity with traditional animal meat, we now find it difficult to believe Beyond Meat’s margins will exceed its packaged food peers,” Arun Sundaram wrote.

Impossible Foods, home of the Impossible Burger, has made gains on Beyond Meat, and done it fast, according to JPMorgan.

Certainly, Beyond Meat isn’t taking a rest. Just this week, the company expanded its lineup with Beyond Meatballs, the third launch this year after Beyond Sausage and Cookout Classic.

The company has tried to use the increased demand during COVID-19 to its advantage, lowering prices on its product at a time when prices for beef have gone up.

Canaccord Genuity applauded the move from Beyond Meat as one that’s expected to drive incremental revenue, deepen customer relationships and take advantage of the grocery shift to e-commerce.

Beyond Meat has also brought its products to international markets like Brazil, and China, where Beyond Meat began selling at Shanghai grocery stores over the summer, and is launching manufacturing facilities.

But these aren’t the only two plant-based meat options, as the category continues to grow and expand into new products.

Kellogg Co.’s K, -1.02% Morningstar brand expanded its Incogmeato line of plant-based proteins with help from Walt Disney Co. DIS, -1.22% with the launch this week of Mickey Mouse shaped Chick’n Nuggets. The item is meant to appeal to families, and could create a market of lifelong plant-based meat eaters.

The Meatless Farm Co., a British-based food company, has landed in the U.S. And another global plant-based food company, Chile-based NotCo, is planning to bring its products to the U.S. after recently closing an $85 million round of funding. Among NotCo’s investors is Bezos Expeditions, the investment group for Amazon.com Inc. AMZN, -1.78% founder Jeff Bezos.

Even with all of this activity in the category, some analysts remain upbeat about Beyond Meat’s prospects. Baird initiated Beyond Meat at outperform earlier this month with a $160 price target.

Baird forecasts that Beyond Meat will end the year with enough manufacturing capability for more than $1 billion in gross revenue.

“Ultimately, Beyond Meat aims to capture traditional beef consumers, thereby gaining share in the meat market (as opposed to solely vegan/vegetarian consumers). With growing mainstream consumer acceptance/awareness of the Beyond brand, as well as growing interest in health, wellness, and sustainability, we expect Beyond products will continue to gain share.”