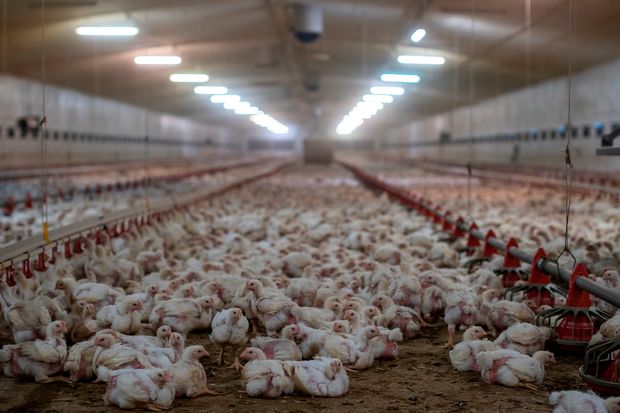 Thousands of chickens in a chicken coop in Poland, the top producer in Europe.

BERLIN (Project Syndicate)—The industrial meat system is out of control. Not only does it contribute to the destruction of the climate, biodiversity, soil, and forests, but it also poses a direct threat to human health.

Until the COVID-19 pandemic, the World Health Organization’s warnings about zoonotic diseases—caused by pathogens that are transmitted from animals to humans—were largely ignored. The same is true of antibiotic resistance—another global health threat closely connected to meat production.

The World Organization for Animal Health estimates that 60% of all infectious diseases in humans are zoonotic. According to research published last year in Nature, this number will continue to increase as the world population rises and consumption patterns change. Changes in land use, such as deforestation and conversion to farmland, are also key factors influencing the transmission of zoonotic diseases to humans.

Rachel Koning Beals: COVID-19’s animal origins remind us that biodiversity and wildlife are disappearing at an alarming rate

Human activity now affects 75% of the Earth’s land surface, with agricultural land—fields, pastures, or meadows—covering more than a third of the planet, and these numbers are growing rapidly. By intervening in and unbalancing natural ecosystems and shrinking wildlife habitats, we are disrupting the symbiotic relationship that has existed between humans and nature for thousands of years.

We know that the reduction of habitats, an ever-larger human presence, and the skyrocketing number of farm animals increase the possibility of infectious-disease transmission from animals to humans. Research published in Nature Sustainability showed that agricultural factors can be linked to more than 25% of all infectious diseases and more than 50% of all zoonotic infectious diseases in humans.

Another major reason for global changes in land use is the production of animal feed. For example, soy—an important protein source for industrial meat production—is planted on more than 120 million hectares globally, an area 3.5 times the size of Germany.

The WHO and the United Nations Food and Agriculture Organization (FAO) have long been warning about pandemics related to industrial livestock. While the global population has doubled over the past 50 years, global meat production has more than tripled. Today, around 300 million tons of meat are consumed worldwide.

In 2017, there were an estimated 1.5 billion cattle, one billion pigs, 23 billion poultry animals, and two billion sheep and goats. These animals often live in groups of tens of thousands in small spaces, which can facilitate the spread of diseases, including bird flu and swine flu.

The U.N.’s Scientific Task Force on Avian Influenza and Wild Birds is convinced that highly infectious bird-flu viruses are not only transmitted by wild and migratory birds, but are also found on poultry farms, where they can be transmitted to wild animals. According to a 2016 statement by the task force, “There is no convincing evidence of any mechanism or wild bird species that is able to carry the H5N8 HPAI virus strains without causing the death of the carriers themselves during long-distance migration.” In contrast, “the risk of HPAI virus circulation by poultry production and trade remains significantly high.”

The threat of zoonotic diseases is not the only health risk related to meat production.

In addition to soy, heavy use of antibiotics is one of the most important features of meat production today. Experts estimate that by 2050, over 10 million people will die annually because antibiotics are no longer effective. According to the WHO, their widespread use in animal production is one of the most important causes of antimicrobial resistance. Government surveys of German supermarkets have found antibiotic-resistant pathogens in 66% of the chicken and 42.5% of the turkey on offer.

Furthermore, COVID-19 outbreaks in slaughterhouses worldwide show that meat production is based not only on environmental destruction and insufficient animal welfare, but also on exploitation of workers.

In Germany, most of these workers come from Eastern European countries and hardly speak the language. Most are subcontracted by companies in their home countries and lack regular labor contracts, which often limits their access to social services and health care. In June, more than 1,000 workers in Germany’s biggest slaughterhouse, owned by the country’s largest meat-processing company, were infected with COVID-19.

Addressing these issues requires targeting “less, but better” meat consumption. In Germany, people eat about 60 kilograms (132 pounds) of meat per person annually. The amount is even higher in the U.S., Australia, and some other European countries. (Americans eat twice as much.)

However, the majority of the global population eats much less meat, and less frequently. This is how meat should be consumed: not three times a day, maybe not even three times a week, but once or twice.

For years, politicians have largely ignored scientists’ health warnings about the meat industry. This year, the entire world has been forced to confront the importance of such warning signs.

A comprehensive transformation of our agricultural and food systems is clearly necessary, with policies that strengthen agroecology and encourage short, diverse, and resilient value chains. The scientific know-how to enact such measures has been available for years. We just need to use it.

This article was published with permission of Project Syndicate—Meat is Mayhem.