Home
Stocks
Election: Biden, Trump mark 9/11 in Pennsylvania, as polls for swing states continue to favor Democratic challenger
Prev Article Next Article
This post was originally published on this site 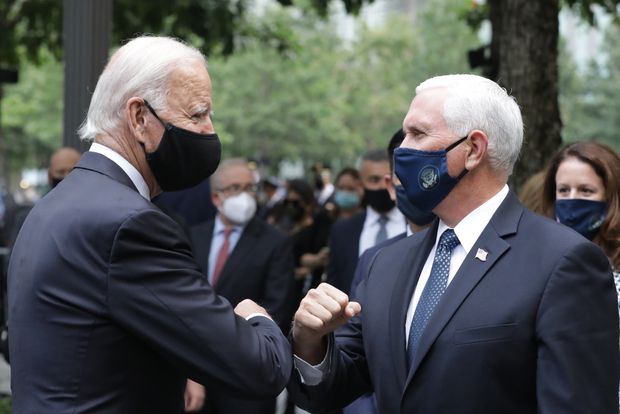 President Donald Trump and Democratic challenger Joe Biden on Friday both were observing the anniversary of the Sept. 11, 2001, terrorist attacks by visiting a memorial in the key swing state of Pennsylvania, and Biden and Vice President Mike Pence also took part in a remembrance ceremony in New York City.

The Democratic presidential nominee then proceeded to travel to Shanksville, Pa., where he and his wife, Jill, were to “pay their respects to the victims of Flight 93,” according to his campaign. That plane crashed into a field after passengers and crew fought back against hijackers, and it’s commemorated with the Flight 93 National Memorial in Shanksville.

Biden told reporters on Friday morning that his campaign had paused advertising for the day. “I’m not going to talk about anything other than 9/11,” he said. “It’s a solemn day. That’s how we’re going to keep it.”

Trump was at the memorial in Shanksville on Friday morning and left before Biden arrived.

“The heroes of Flight 93 are an everlasting reminder that no matter the danger, no matter the threat, no matter the odds, America will always rise up, stand tall and fight back,” Trump said in a speech at the memorial.

Biden’s and Trump’s remarks come 53 days before the Nov. 3 election, and as the Democratic challenger has an edge of almost 4 percentage points over the Republican incumbent in a RealClearPolitics moving average of polls focused on top swing states that are likely to decide the White House race. Biden’s advantage in Pennsylvania is 4.3 points. Trump and his campaign have said pollsters are getting the race wrong.

Betting markets are giving the former vice president a 53% chance of winning vs. Trump’s 46.2%.