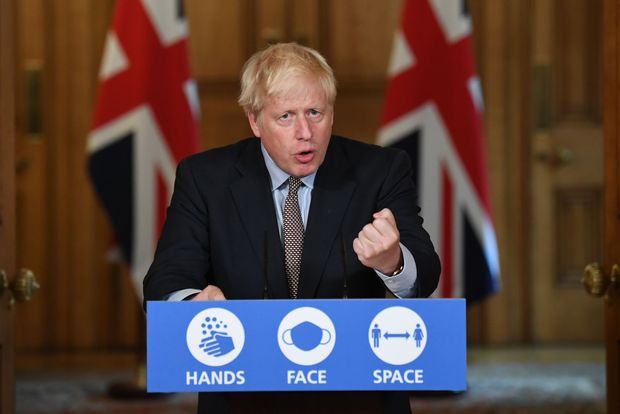 An army of ‘Covid marshals’ will police new social distancing rules across England as Prime Minister Boris Johnson unveiled a raft of new measures to combat a rapid rise in coronavirus cases.

From Monday the public will face arrest if they gather outside or inside in groups of more than six, Johnson said in his first public coronavirus briefing for six weeks. Back in July rules were relaxed to allow friends and family to congregate in groups of up to 30.

“We will boost the enforcement capacity of local authorities by introducing Covid-secure marshals to help ensure social distancing in town and city centres,” Johnson said making it law that bars and restaurants record the contact details of customers.

“In future, premises where people meet socially will be legally required to request the contact details of a member of every party, and record and retain these details for 21 days.”

Read: AstraZeneca vaccine ‘most likely’ to roll out in the U.K. early next year

The government has been forced to act because of a sudden increase in new coronavirus cases in recent days. In April 6,000 new cases were recorded per day, but this dropped to well below 1,000 in June. Newly diagnosed cases have risen beyond 2,000 for the past three days , according to data from the Department of Health and Social Care.

“The reason that we’re doing this,” the prime minister said, speaking of the new measures, “is to prevent another wholesale national lockdown of the kind that we had in March.”

Spain, France and Germany have been battling to avoid a second wave and the U.K. is hoping these swift and strict new rules will stop the spread of the virus. Experts in the U.S. have been following developments in Europe closely.

The prime minister also revealed a plan to shift the paradigm in the country’s testing regime. Johnson now wants to make it easier and faster for people to get a test and focus on identifying those without the virus to allow as many people “to lead more normal lives” as possible.

Testing will expand to include those who don’t have symptoms, “so we can allow them to behave in a more normal way in the knowledge that they can’t infect anyone else with the virus,” Johnson said. This is a departure from the current testing regime, which is limited to identifying those with the virus.

The new testing plan, which the prime minister called a “moonshot,” involves stepping up testing to 500,000 per day by the end of October and getting test results back to people in 20 to 90 minutes.

Johnson said the plan “will require a giant collaborative effort from the government, from  business, from public health professionals, scientists, logistics experts, and many, many more.”

A pilot project will be rolled out in Salford, near Manchester in northern England, next month to explore the practicality of testing people prior to attending venues for mass events, like theatres and sports grounds, in indoor and outdoor venues.

Drastically ramping up testing capacity and allowing people without symptoms to get a test will also bring implications for those travelling to the UK from abroad. Currently, travellers from much of the world are required to self-isolate for 14 days upon arrival to England. If travellers from abroad test negative, they could be released from quarantine. 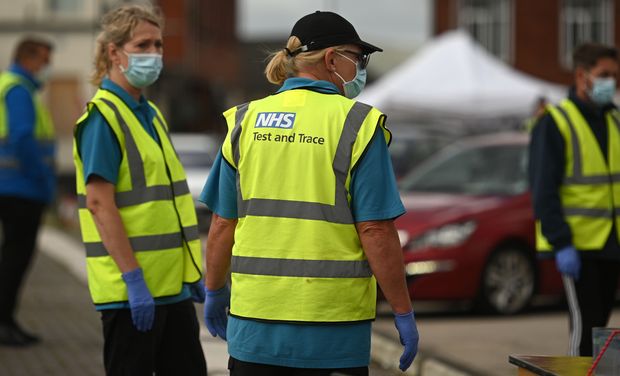 The prime minister outlined plans for a “moonshot” new testing regime, including ambitions to return test results in 20 to 90 minutes.

Sir Patrick Vallance, the UK’s Chief Scientific Advisor, spoke at the press conference about the news that AstraZeneca AZN, +0.45%’s late-stage coronavirus vaccine trial has been paused because one of the participants developed an unexplained illness.

“That is not an unusual thing,” at this point in the program’s testing, Sir Patrick said. “We need to make sure with these vaccines that they work, they work well enough, and they are safe.”

And this: AstraZeneca’s coronavirus vaccine setback shows why Big Pharma prefers to be safe than sorry. Which is good news

Side effects like the ones identified in the AstraZeneca trial happen “inevitably,” Sir Patrick said, and cautioned that people should expect to see similar pauses in other trials as they progress responsibly.

The chief scientific advisor reiterated the sentiment from major drug manufacturers this week that trials should proceed with caution and that pauses like the one seen in the AstraZeneca trial are an integral part of the approval process. “It’s wrong to just jump over those stages and approve a vaccine on hope.” 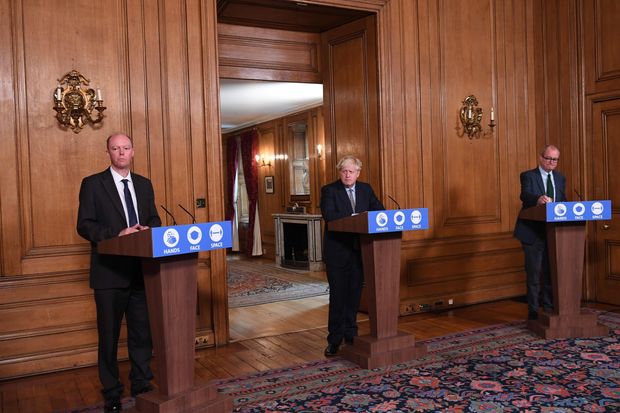