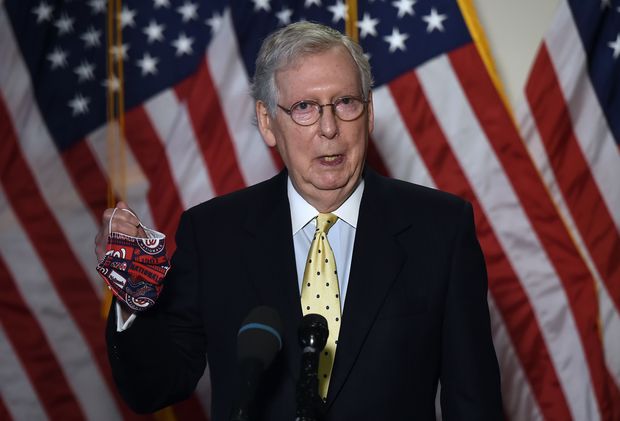 There will be a vote on another coronavirus stimulus package in the Senate on Thursday. But it will most likely only be the first step on a long and winding road which may or may not end with a deal before Election Day.

Senate Majority Leader Mitch McConnell said Wednesday he wasn’t sure whether a new aid bill could be passed before Congress leaves for the campaign trail at the end of the month.

And because they are not going to be tied together, the increasing focus by lawmakers on getting a short-term government funding bill done by Sept. 30 to avert a shutdown means less bandwidth for the stimulus debate. A better-than-expected reading on unemployment in August also may make negotiations tougher, not easier.

“I don’t know. I hope that’s not the case,” McConnell said when asked if Congress would leave in two weeks without a stimulus deal and not return before the election.

Steven Mnuchin, the Treasury secretary who’s been the lead negotiator in previous stimulus packages between the White House and Congress, sounded a similarly plaintive note when asked at the White House earlier in the day about the odds for a deal by the end of the year.

The next immediate step is a vote on a 285-page bill McConnell unveiled Tuesday. In an attempt to grab the initiative on proposals for coronavirus aid that have broad bipartisan support, the bill includes a second round of Paycheck Protection Program money for small business owners, a revived federal add-on payment to state jobless benefits and more than $100 billion to help schools and colleges stay open amid the virus.

The bill would require 60 votes to overcome a Democratic procedural hurdle, though, a target it is not expected to hit. But with the White House negotiating directly with House Speaker Nancy Pelosi and Senate Democratic Leader Chuck Schumer, getting 51 Republican votes could propel McConnell back into COVID-19 talks on behalf of a unified Senate Republican conference.

Whether that actually happens, though, was still unclear. Finding a policy mix that could have broad Republican support yet also not alienate the conference’s more conservative or libertarian members has been difficult so far.

Even McConnell expressed uncertainty about the so-called targeted bill’s prospects among his fellow Republicans.

“The vote will be cast tomorrow,” he said after the party’s weekly lunch get-together in a Senate office building across the street from the U.S. Capitpl.

Pelosi was dismissive. “He doesn’t have the votes,” she said.

While some economists have warned the lack of a second big stimulus package could lead to another downturn, the August jobs report showed that danger may be dissipating.

The Labor Department said the unemployment rate in August fell to 8.4%, lower than expected and in single digits for the first time since March, when the coronavirus pandemic forced widespread lockdowns.

Also working against a stimulus deal is the new focus on getting a continuing resolution, or CR, done so the government doesn’t shut down after Sept. 30, the end of the fiscal year.

CRs typically continue funding government agencies at the existing level, with some minor exceptions. But how long a CR should last and how free it should be of funding anomalies will have to be negotiated.

“It doesn’t seem promising at the moment on simulus,” Sen. Richard Shelby, the chairman of the Senate Appropriations Committee, told reporters.

“So if we’re not going to — if we don’t get a stimulus, then the only game in town would be a few nominations and the CR, funding the government, and that’s where we intend to.”

Shelby said he hoped a CR would last into December and be relatively free of anomalies.

Schumer, talking with reporters in the afternoon, said Democrats were still mulling how long a CR should last.

“We haven’t formulated our position yet,” he said.