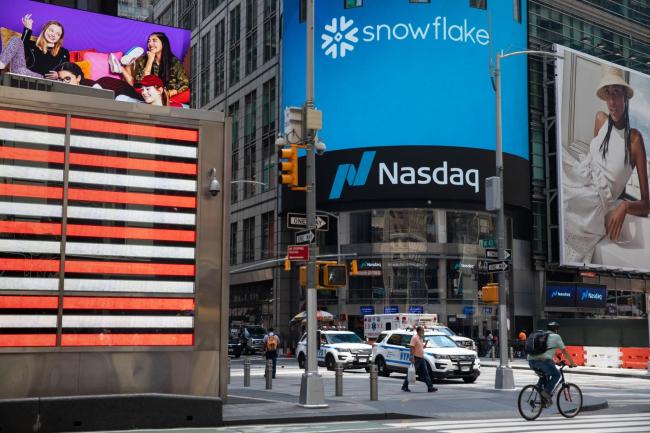 Skepticism looked smart with technology shares leading the biggest drop since March. Warnings that valuations were out of control and investors would pay for their euphoria have been swirling around for weeks amid a stretch in which the S&P 500 went 30 sessions without a 1% decline. On Thursday, it fell about 4%, while the Nasdaq 100 lost 5.7%.

Bears took a victory lap as high-flying stocks such as Zoom Video Communications (NASDAQ:ZM) Inc., Tesla (NASDAQ:TSLA) Inc. and Apple Inc (NASDAQ:AAPL). dragged the Nasdaq 100 lower, after the index had rallied in 11 of the past 13 sessions. While the correction was abrupt, it was a overdue given how crowded the megacap tech trade had become, according to Wells Fargo (NYSE:WFC) Investment’s Sameer Samana. And with market attention likely to turn to the upcoming U.S. presidential election after the holiday weekend, traders are likely trimming risk, he said.

“While there was no one trigger, there’s probably some nervousness and squaring up of positions heading into a long weekend,” said Samana, the firm’s senior global market strategist. “Given the nice run, you could even describe it as profit-taking.”

Tech has powered the S&P 500’s 55% rebound from its March lows. The dynamic kicked into overdrive in recent weeks after Apple and Tesla’s stock splits caused the shares to surge. Prior to Thursday, the Nasdaq’s 41% year-to-date gain exceeded the American equity benchmark’s advance by about 30 percentage points. That’s pushed the relative strength of the Nasdaq over the S&P 500 to the highest on record.

“At some point, you’re bound to see some profit-taking and re-positioning within portfolios,” said Adam Phillips, director of portfolio strategy at EP Wealth Advisors. “It’s hard to know what the final straw was for investors, but the selloff shouldn’t come as much of a surprise. It was quite evident that areas of the market were overextended.”

The warning signs were there. Implied volatility on the Nasdaq 100 has been rising even as the index rallied — a rare alignment that strategists warned would end painfully, as booming demand for call options forced dealers to recalibrate their hedges. But if that so-called “short-gamma” hedging lifted stocks, logically it should also be capable of exacerbating moves the other way. When shares fall, market makers are likely to unwind hedges at an increasing speed, spurring more losses.

The equity volatility “complex is acting ‘broken’ and indicative that ‘something’s gotta give,’” Charlie McElligott, a cross-asset strategist at Nomura Securities, wrote in a note Thursday. “It all adds up to feel like a recipe for tears, i.e. ‘real’ potential for a Nasdaq/SPX -6% to -8% single day in the next 1m-2m time frame.”

While betting against tech bubble in the 2000s was painful for those who were early, Thursday’s rout is an opportunity to rebalance away from the sector, according to BTIG LLC’s Julian Emanuel. He’s bullish on bank stocks, which are still nursing losses of over 18% in 2020.

“If you have too much technology in your portfolio, now is the time to start taking a little bit of it off with winners, and reallocate to financials,” Emanuel, chief equity and derivatives strategist at BTIG, said on Bloomberg Television and Radio. “We think the Fed has changed the game and financials will ultimately lead the market higher in 2021.”